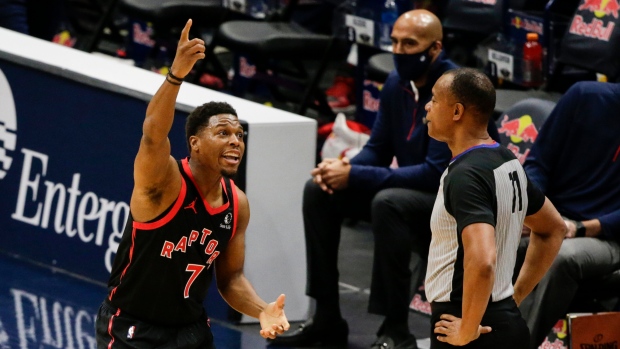 TORONTO – It’s hard to imagine the Raptors’ lead guards, Kyle Lowry and Fred VanVleet, doing more to help dig the team out of its early-season hole, on or off the court. But if you were to ask them, they’d tell you they’re not doing enough.

Now more than ever, it’s nice to have a couple of natural-born leaders who aren’t used to – and refuse to accept – losing.

“That’s my job and I gotta do a better job of what I’ve been doing,” said VanVleet, one of Toronto’s few bright spots amid a troubling 1-5 start to the campaign. “I gotta keep trying to lead, find new ways to help guys. I gotta play better myself and I gotta continue to find ways to help our team individually and collectively. Nobody’s above criticism and I’m certainly not, and whatever I’m doing is not enough, obviously. It’s about wins and losses around here and we’re not getting any wins right now.”

The 26-year-old is justifying the $85 million deal he signed over the off-season, while Lowry, who will turn 35 in March, is proving he has a lot left in the tank. Through six games, his numbers are virtually identical to last season, when he earned his sixth straight all-star selection.

He’s still among the league leaders in drawing charges – he’s taken five, so far, which ranks second in the NBA behind Victor Oladipo. And, in spite of the team’s negative point differential (minus-25), he’s still had a positive impact – he’s plus-14, tied with Chris Boucher for the best mark on the team.

The problem, and one of the biggest reasons why the Raptors find themselves in this hole to begin with, is that Lowry and VanVleet simply haven’t gotten enough help from the rest of the roster.

The struggles of Pascal Siakam, and even OG Anunoby – who’s had an inconsistent start to the campaign after signing a $72 million contract extension ahead of opening night – have been well documented, but it runs deeper than that. Toronto’s supporting cast hasn’t been very supportive.

Nick Nurse isn’t one to mince words when his players are underperforming, and he didn’t hold back following the team’s most recent defeat.

“I mean, he was okay,” the Raptors head coach said when asked about Malachi Flynn – the popular rookie point guard, who saw his first meaningful action of the season in Monday’s loss. “But I think my bigger thing is that if you want to be honest about it, he didn't really do much out there. And if you want to be honest about it, Norm [Powell] hasn't played very well this year. And [Terence Davis] hasn't played very well. And Matt [Thomas] didn't play well. We've got to play better. We've got to get these guys playing to their capabilities. I think they're better players than that. So we as coaches need to get them playing better.”

Coming off a career year in which he shot 50 per cent, Powell has hit just 16 of his 52 field goal attempts (31 per cent) to open the new season. Without his typical offensive production to fall back on, his frequent defensive miscues have become far more glaring. Nurse has had a hard time keeping him on the floor, citing a track record of success for his continued playing time.

Thomas and Davis – a pair of sophomores without Powell’s resume – have been given a much shorter leash. Defensive lapses have cost them their spots in the regular rotation.

“I'm disappointed in Matt [and] I'm disappointed in Terence,” Nurse said ahead of the Boston game. “They've made way too many mistakes defensively. They're our two best shooters, probably, but they're just coming out and fouling and giving up boatloads of points in a short amount of minutes, and they can't get that many back on the other end. So I'm still searching there.”

The answer, in their stead, has been Stanley Johnson, who gives the Raptors more size and defensive toughness on the wing. Like Thomas and Davis, most of his contributions come at one end of the floor. But unlike those other guards, they come at the end of the floor that Nurse generally prioritizes. Unless somebody evolves into more of a consistent two-way player, he’s almost always going to choose defence over an offensive specialist.

“I’m totally leaning towards Stanley,” Nurse said of Johnson, who has now logged at least 10 minutes in four straight games, something he did in just three contests all of last season. “It just has to balance out the rotation. I just cannot keep sending out another little shooting guard. We’ve got a whole slew of ‘em, and we already have two really good ones that start and play most of the minutes. And Stanley, we’ve got a gaping hole at the wing at three-four [positions], and that’s where he’s going, and he’s done really well. I think Stanley’s done a good job. It’s the defence we need. So that’s where he’ll stay.”

That’s not exactly a ringing endorsement of the team’s roster construction from its head coach. Their guard-heavy depth chart always seemed like it would be somewhat problematic. That they haven’t gotten much from their overhauled frontcourt makes it considerably worse.

The Raptors knew they were downgrading at the centre position when they lost Marc Gasol and Serge Ibaka in free agency, but they hoped that the additions of Aron Baynes and Alex Len – on top of some internal growth – would help fill the void. So far, they haven’t.

Neither Baynes nor Len have had much of an impact on either end of the floor, with the former getting benched in the second half against Boston after he bricked four layups in 14 scoreless first-half minutes.

Boucher has been a pleasant surprise, and might be the only Raptors player at any position – outside of Lowry and VanVleet – to exceed, or even meet expectations early in the campaign. But his skill set and physical limitations don’t align with the team’s most pressing need from its bigs. They’ve been out-rebounded in all but one of their games and were bested 56-37 on the boards by Boston.

Although Nurse’s Raptors have always embraced the concept of positionless basketball, there’s a limit to it. They need some size out there if they’re going to compete on the glass and hold their own against bigger clubs defensively.

The roster construction is such that it’s difficult to optimize the talent on this team. That hardly seems like the biggest concern at the moment, though. After all, it’s not like any of their excess guards have done much to separate themselves or take advantage of their opportunities.

Even Flynn, who fans had been clamouring to see, resembled a first-year player and 29th-overall pick that is still learning the NBA game when he finally got his shot. Is it odd that it took this long to finally give him a look, given how underwhelming the alternatives have been? Sure, but Nurse deserves the benefit of the doubt in that regard.

More often than not, he’s pushed the right buttons with his players and tends to reward the guys who have earned the playing time. The reality is he needs at least a few people to step up and do more with their minutes.

You’ll recall that he was similarly critical of his role players around this time last season. Leaning on the seven holdovers from the championship-winning team, he challenged his bench to raise their level of play. It wasn’t until injuries hit during a tough West Coast trip eight games into the campaign that some of those other guys had their breakout moments and Nurse realized he had more depth than he initially thought.

With the Raptors heading out West for four games in six days this coming week, beginning with Wednesday’s visit to Phoenix, they’re hoping for a similar result. Last year it was Boucher, Davis and Rondae Hollis-Jefferson who met the challenge and sparked an unlikely road win over the Lakers.

Yes, they’ll need Siakam and Anunoby to play better if they’re going to turn the corner and rescue their season, but who else will emerge to help take some of the pressure off Lowry and VanVleet?

“It’s not our job to make trades or change the roster around. We gotta go play with who we got,” said VanVleet. “We’re good enough, we got enough on the team to do it, but we gotta do it. Each guy has to perform a little bit better, and that’s gonna help the collective.”​