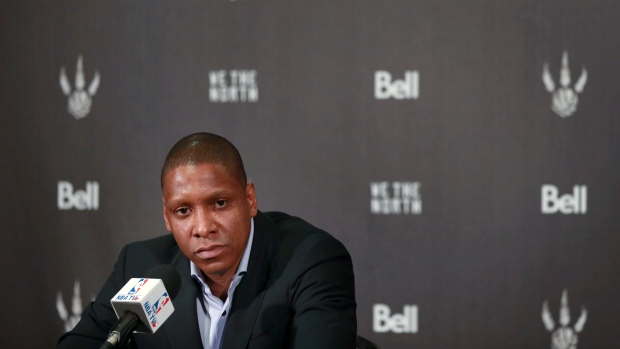 TORONTO – To be a championship-winning team in the NBA, or in any sport, you need to have an abundance of talent and at least a little bit of luck. The Toronto Raptors had plenty of both in 2019.

Recently, though, good fortune has been harder to come by. You can understand why they might feel snake bitten coming off an ill-fated 2020-21 season.

They were the only club to be displaced for the duration of the campaign. They were hit hard by an organization-wide COVID-19 outbreak at arguably the worst time. Their point differential was indicative of what they insisted all year: that they were better than their record.

The silver lining to a disappointing result – missing the playoffs for the first time in eight years – is the uncommon position they find themselves in ahead of next month’s NBA draft.

They are not a rebuilding team, at least their intention is not to rebuild. With a good young core of Pascal Siakam, Fred VanVleet and OG Anunoby under contract long-term, an off-season to retool around them, and a likely return to Toronto, their hope is to be competing at or towards the top of the Eastern Conference again next season. Now, they’ll also have the chance to add a cost efficient, foundational piece that can help them get back there.

This week, the Raptors will find out where they’ll be selecting at the July 29th NBA draft, and this would be a good time for their luck to come around.

Thanks to some late-season manoeuvring, they’ll have the seventh-best odds in Tuesday’s draft lottery, with a 7.5 per cent chance of landing the top pick and a 31.96 per cent shot of moving into the top four.

The league only draws for the top-four picks, chosen from the 14 teams that missed the postseason. The remaining teams will select in inverse order of where they finished in the standings. As a result, Toronto can only end up with picks 1-4 or 7-11. Their odds are as follows:

The eighth pick is their most likely landing spot, which accounts for the possibility of a team below them moving into the top four. Their chances of falling to 11th are lower than 0.1 per cent, meaning they’re virtually guaranteed a top-10 pick.

For reference, there is some recent history of teams with lower odds getting lucky on lottery night. Just two years ago, the New Orleans Pelicans, who also went in with the league’s seventh-worst record, won the Zion Williamson sweepstakes. Dating back to 2000, six teams with the seventh-best odds or lower have been awarded the first-overall selection. And the new lottery system that the NBA implemented in 2019, which flattened the odds of landing the top pick, should increase the frequency of upsets moving forward.

The Raptors haven’t selected in the lottery since 2016, when they drafted Jakob Poeltl ninth-overall – a pick they received from New York in the Andrea Bargnani deal three years prior. The last time they had a lottery pick of their own predated Masai Ujiri and Bobby Webster (they took Terrence Ross eighth-overall in 2012).

Given the success this front office has achieved finding talent towards the end of the first round (Siakam, Anunoby, Malachi Flynn), in the second round (Norman Powell), or outside of the draft altogether (VanVleet), it’s exciting to think about what they could do with a top-10 pick.

It’s been a while since they’ve been in this position, and if everything goes according to plan they hope it’ll be a while until they’re here again. With the money they’ve invested in the trio of Siakam, Anunoby and VanVleet, and depending on what they decide to do with Kyle Lowry this summer (or with their cap space if he leaves in free agency), they could be locked into this core for the next two or three years. This is their best and maybe only chance to add premiere talent to that group, meaning it’s crucial that they hit on this pick, regardless of where it ends up.

If you were going to move up in the draft, this would be a good year to do it. The consensus first-overall pick, versatile and skilled guard Cade Cunningham, looks the part of a generational, franchise-altering type of prospect. In a different class, all three of the players that will likely follow him, in some order – rangy big man Evan Mobley, and dynamic guards Jalen Green and Jalen Suggs – could have been the top pick themselves. Each of them would look great in a Raptors uniform and fit seamlessly into their system and organizational culture.

After forward Jonathan Kuminga, who most draft boards have slotted fifth, things really open up. There’s plenty of talent to be found in the mid to late lottery, even if you’re not getting a can’t-miss star. But in terms of who goes where, it will depend on the need and preference of the teams selecting in that range, as well as how guys do in their pre-draft workouts.

Would the Raptors be willing to roll the dice on a raw but high-upside player like forward Scottie Barnes or big man Kai Jones?  Would they lean towards a more polished, NBA-ready prospect like guards Moses Moody, James Bouknight or Davion Mitchell? Or, would they go off the board entirely?

Before they have to make that call, and before they really ramp up the pre-draft process – interviewing and auditioning prospects in Tampa and then narrowing down their list – they’ll have to defer to lady luck.

They’ve decided on a good luck charm. VanVleet will represent the Raptors at Tuesday’s virtual lottery, and it’s a fitting choice. Generally teams send somebody from the front office to these things (former general manager Bryan Colangelo attended the lottery that Toronto won in 2006). Given Ujiri’s uncertain contract situation and Webster’s preference to keep a low profile, head coach Nick Nurse or a player were probably the best options.

And if you’re going to send a player, who better to represent a franchise known for its player development and winning pedigree than VanVleet – somebody who didn’t even need the draft to blossom into an NBA champion and one of the league’s rising stars?

He bet on himself, and it paid off. Now the Raptors are hoping he can help them hit the jackpot.​