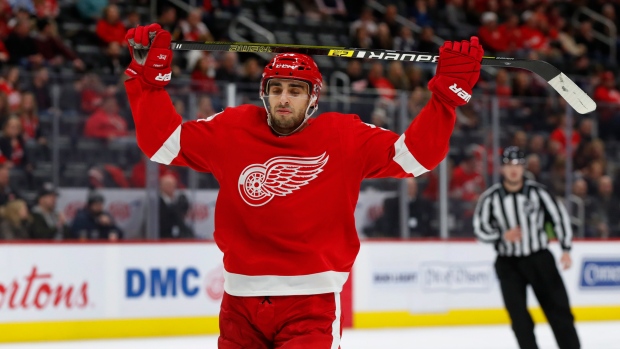 There was no misconception about the many obstacles facing the Detroit Red Wings at the start of the 2019-20 season: an aging lineup in perilous need of transition, a new general manager for the first time in more than 20 years, and a coaching staff trying to introduce swaths of developmental level talent while simultaneously remaining competitive.

The only hope in Detroit – same as it is in Ottawa or Los Angeles for that matter – is that the team would play well enough to properly evaluate the developmental talent on the active roster.

But at the end of the day, the primary goal is to secure as high a first-round pick as possible at the 2020 NHL Draft. Whether it’s Rimouski’s Alexis Lafreniere or any of the other impact players inside of the top five, Detroit knows they have a real shot to replenish their prospect pool come June.

But even with the appropriate context, it’s hard to imagine that Detroit is happy in any capacity with the first two months of the season. They’ve surely set themselves up to contend for the best odds come draft lottery time by being utterly futile on the ice.

Through 31 games (38 per cent of the regular season), Detroit’s record is 7-21-3. The average game this season – thanks to a -58 goal differential – has seen them losing by just under two goals. And they are uniquely bad, to be sure. New Jersey just fired their coach with a 9-15-5 record and a -35 goal differential. Ottawa and Los Angeles, mentioned previously, have a -16 and -25 goal differential, respectively. The Red Wings are another class of bad.

Where are the goals being lost? The truth is that it is happening at every game state, though to slightly varying degrees. Special teams have been a disaster: The Red Wings are 28th in scoring on the power play (4.5 goals per 60 minutes) and are 31st in goals against on the penalty kill (10.0 goals against per 60 minutes).

You would expect a young team to struggle a bit at special teams, but 5-on-5 play is another animal entirely. Consider some of the key performance indicators we have when it comes to assessing performance on both ends of the ice there: 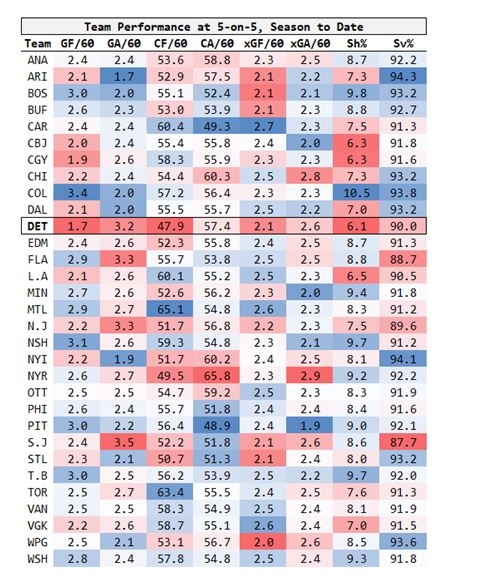 We know the team isn’t getting results anywhere, and that includes a goaltending duo (featuring Jonathan Bernier and Jimmy Howard) that’s stopping just 87.7 per cent of shots this season. The team spends an inordinate amount of time in the defensive third, can’t get a save when they need it, and have so little bite offensively that teams have no trouble teasing pucks loose and flipping the ice back into the Detroit third.

The point here, more than anything else, is that lead indicators like shot differentials or expected goal rates are just as dire as the actual goals being scored on the ice. For every 60 minutes of play the Red Wings see at 5-on-5, they are down a whopping 1.6 goals to their opponents. 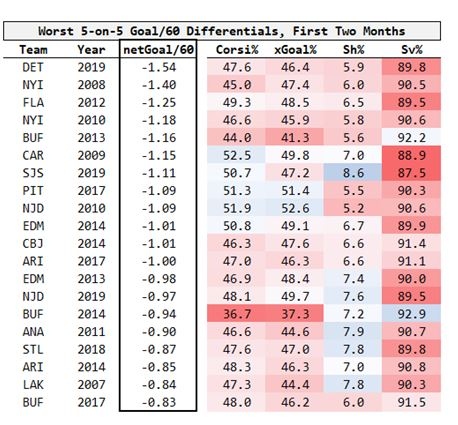 Over the 2007-20 window sampled here, I couldn’t find a team with a worse goal differential through the first two months of the season than this year’s Red Wings.

More than anything it suggests just how unlikely it is that everything (the offence, the defence, the goaltending units) goes wrong at the same time. Recall for a moment the 2014-15 Buffalo Sabres here, a team actively tanking the moment the puck dropped on that season. Jhonas Enroth and Michal Neuvirth were stopping nearly 93 per cent of the shots through what was otherwise a ghastly stretch of hockey from a team without any incentive to win.

So, where is the bright side for this team outside of the 2020 NHL Draft? Truthfully there isn’t much – not at the NHL level right now. But the team’s top line of up-and-coming forwards has certainly been productive. Before Anthony Mantha was sidelined with a hand injury, he – along with Dylan Larkin and Tyler Bertuzzi – had combined for 15 goals in just 226 minutes (3.9 goals per 60 minutes).

But the group struggled at times with off-the-puck play, and Detroit’s performance behind the first line has been frightening. It’s been so bad that popular regression models – like Evolving Hockey’s Goals Above Replacement measure – only indicate four players as being materially better than replacement-level talent: the three aforementioned attackers, and 22-year-old defenceman Filip Hronek. Whereas the trio of forwards has helped stem the tide at even strength because of the offensive production, Hronek’s value is largely borne from his defensive play and penalty-killing prowess. (On the penalty kill point, the Red Wings are conceding about 7.5 expected goals per 60 minutes with Hronek on the ice. That increases by 16 per cent when Hronek sits.)

Detroit was invariably going to live through some difficult days. But the beatings they have taken in the first two months have to be demoralizing, and it’s going to put a lot of pressure on head coach Jeff Blashill and the rest of the organization to keep his roster engaged.

The prospects are coming, but right now it’s dark in Hockeytown.