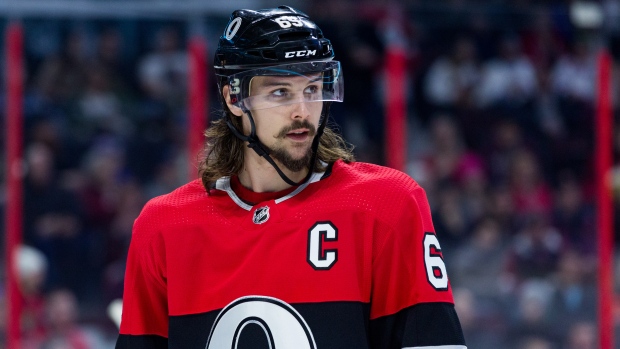 Ottawa Senators general manager Pierre Dorion could be the busiest GM between now and Monday’s NHL trade deadline, but if captain Erik Karlsson has even a remote chance of being traded, interest is sure to amplify.

Karlsson is the latest to join TSN Hockey’s Trade Bait board, though he remains a longshot to be dealt before the 3 p.m. ET deadline Monday.

TSN Hockey Insiders Darren Dreger and Bob McKenzie reported Tuesday the Senators have received a “high level of interest” and that Dorion is “aggressively listening” to offers on arguably the best defenceman in the NHL.

It will reportedly take no less than a “king’s ransom” to land Karlsson before the deadline, a package that includes as many as five, six or even seven pieces, some mix impact roster players with high draft picks and prospects. The haul may also mean a team having to take on Bobby Ryan’s contract, which has four seasons remaining at a $7.25 million cap hit.

That the price is so high is perhaps an indication that the Senators have little interest in trading Karlsson. Ultimately, this may be a move that waits until the off-season – if at all.

Karlsson is eligible to sign an extension as early as July 1. He is in the final year of a seven-year, $45-million deal.

The 27-year-old Karlsson was asked by the Senators to submit his list of 10 teams to which he would not accept a trade to in early December.

Karlsson has more points this season (41) than any other player on TSN’s Trade Bait board and that’s during a down season on the heels of a significant off-season ankle surgery. He has averaged 74 points per year over each of his last five full seasons.

One other new name to join the list is injured St. Louis Blues forward Robby Fabbri. Teams have inquired about Fabbri’s availability while he rehabs his left knee, which was reinjured in training camp following surgery to repair a torn ACL last February. Fabbri, 22, has not played a game in more than a calendar year, but teams would like to try and buy low as he attempts to resume his promising career.

One name not on the board but available before the deadline is veteran Jarome Iginla, who was spotted training with the AHL’s Providence Bruins on Tuesday. Iginla, 40, has made it all the way back from hip surgery and would like to continue playing in the NHL. He must sign a contract before Monday’s 3 p.m. deadline in order to be eligible for the Stanley Cup playoffs.

Here is TSN Hockey’s latest Top 45 Trade Bait list, whose ranking always seeks to blend the likelihood of a trade with a player’s prominence: