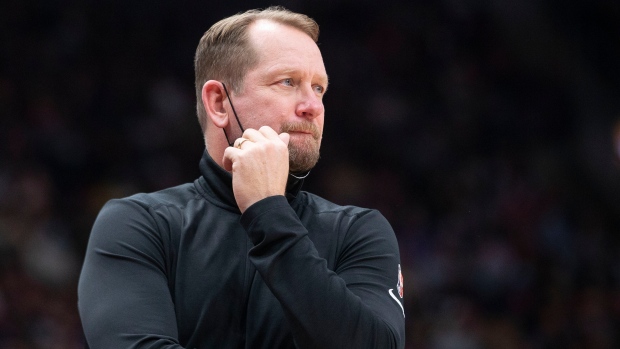 TORONTO – Nick Nurse has never been afraid to send a message to his players or to his bosses, and on Wednesday he did both.

For the second straight game, the Raptors went toe-to-toe with an elite opponent on the road. They were hard-fought contests featuring a total of 44 lead changes and a pair of exciting finishes, but both ended the same way, in narrow defeat for Nurse’s team.

In each game, losses to Dallas and Miami, Toronto’s head coach opted to stick with a tight rotation of seven players, while primarily leaning on six.

The statement was clear. To compete against the league’s best, Nurse feels he can only rely on the guys in his circle of trust, and with more than half of the season in the books, that remains an exclusive club. The implication being, his team needs some help, if not from the underachieving players who have been watching and waiting on the bench, then from the front office.

There are no easy answers. With two key rotation pieces out of the lineup and a lack of depth behind them, Nurse can either risk overworking his regulars or roll the dice on unproven players who haven’t been producing in their limited minutes.

It’s a no-win situation, hence Nurse’s frustration following Wednesday’s 102-98 loss to the red-hot Mavericks. He commended the effort of his team, but seemed annoyed by the narrative that was starting to develop.

It’s fair to acknowledge the substantial workload that some of these guys are carrying on both ends of the floor, or even question it and suggest that it may be taking its toll. The Raptors played four games in six days, all of them on the road and with a shortened bench. Over that stretch, Fred VanVleet and Pascal Siakam both played 167 of a possible 192 minutes, with OG Anunoby logging 153. Those three players combined to shoot 5-for-23 from three-point range against Dallas, including 1-for-9 in the fourth quarter when it sure looked like they had run out of gas.

“You guys watched the game, I’ll let you make of that what you will,” VanVleet said after a rare off-night shooting. “I’m definitely not gonna make any excuses here. I gotta be better, and if I make a couple more shots we probably sneak out of here with a win.”

But instead of suggesting that the Raptors lost because they overextended their best players, you could look at it and ask; would they have even had a chance to compete with one of the league’s hottest teams and steal an unlikely win if they didn’t ride those guys?

They haven’t played well, but in their defence, it’s tough for players – especially young players – to stay in rhythm, get comfortable in their roles, and produce consistently when their usage is so sporadic. It’s a chicken and egg scenario. Those guys aren’t going to play unless they produce, but they can’t produce if they don’t play. Generally, the time for players who are outside of the rotation to earn a coach’s trust is in practice, but the Raptors haven’t had many of those recently.

That’s where Nurse’s dilemma comes in. Will you get more out of the starters running on fumes or the end-of-bench guys on fresh legs? If it were that simple, the answer would be relatively straightforward. The seven guys that are playing right now – VanVleet, Siakam, Anunoby, Scottie Barnes, Precious Achiuwa, Chris Boucher and Justin Champagnie – are playing for a reason. They make mistakes here and there and have their off nights, but for the most part they’re bringing effort and energy every time they step on the floor, which is all you can ask.

That’s why it’s not just a question of who you’d rather have out there right now. The concern with the team’s recent minute distribution is the long-term impact it might have.

VanVleet leads the league in minutes and just became the first player to log 40 or more of them in five consecutive games this season. He’s exceeded 40 minutes 14 times, most in the association. Siakam ranks fifth despite waiting until November to make his season debut; he’s topped 40 minutes in nine of the last 13 contests.

These are 27-year-old professional athletes who are in peak physical condition, but they’re also human. Whether it’s physical and mental fatigue or an increased risk of injury, those minutes are bound to take a toll, if they haven’t already. And with playoff – or at least play-in aspirations – the Raptors will need those guys in April and May as much or more than they need them in January.

They’re hoping to get Gary Trent Jr. back from his ankle injury over the next few games, perhaps as early as Friday in Washington, with Khem Birch’s expected return from nose surgery not far behind. That will help ease the burden on the other starters, but only increases Nurse’s circle of trust to eight or nine guys, depending on how Champagnie fits into their plans. That’s a solid playoff rotation, but it’s still not enough over the course of the regular season.

Coming into the campaign, the team’s stated goal was to balance competing in the short-term with developing and planning for the future. More often than not, when those priorities have conflicted, they’ve veered towards the latter. It’s why they benched veteran point guard Goran Dragic, and then eventually sent him home, in favour of playing Banton and Flynn early in the season, or getting Barnes and Siakam more reps at the position recently. It’s why they’ve committed to the youth movement and letting guys like Barnes and Achiuwa play through mistakes and learn on the fly.

It’s also why Nurse’s recent game management and minute distribution have been so uncharacteristic for a team in a developmental season. It’s not entirely unusual to see a coach prioritize winning in the short-term; that’s his job, while the front office is tasked with keeping more of an eye on future interests. Still, it’s worth wondering if this signals a shift in their philosophy.

The February 10 trade deadline is three weeks away and, according to multiple league and team sources, the Raptors intend to operate as buyers. What that means exactly remains to seen. Their dream scenario is to add a player, or players that fit their short and long-term plans without breaking up their core, though you can see why that would be easier said than done. Failing that, would they be willing to part with future assets, such as first or second-round picks, to address immediate needs and raise the ceiling for this season’s team? Have president Masai Ujiri and general manager Bobby Webster seen enough from this young group to expedite the timeline and make a run in this wide-open Eastern Conference?

“I have conversations with Bobby and we’re trying to evaluate who exactly we are, and if you’re going to try to add a piece or two,” Nurse said ahead of Monday’s 104-99 loss to the Heat. “It’s been more difficult this year to figure it out. We’ve got some guys that we really believe in that we’re growing with for the future, like a really good group of core guys. Those, I would say, six for sure, or seven maybe, would be guys we want to focus on. You don’t want to do anything to disrupt that group in a huge way.”

“We’ll see. I think any way you can try to improve your team, you should do it, even if it’s incremental steps, guys in the rotation, etc.”

Until and unless reinforcements arrive, it’s on Nurse to figure this out with the roster that’s currently at his disposal.

“This is what we got,” VanVleet said. “There’s no help on the way. We’re in a fight. We’re grinding it out. We got high-character guys, guys that work extremely hard. We’ve got a great medical team, a great organization, and we’re doing everything we can to play hard every night. I think we’re getting great performances from the guys who are playing. This is what we’ve got until [we hear] otherwise.”