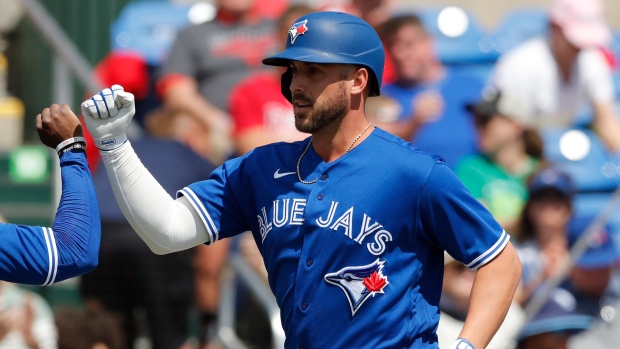 TORONTO — As the Blue Jays continue to lobby the federal government for permission to play their 30 home games in Toronto this summer, it seems at least a handful of players aren’t interested in extending their quarantine bubble situation beyond training camp.

It was an unexpected development.

After reporting Friday morning that the penalties Blue Jays players have been warned about, according to multiple sources, and could face if they’re caught in city streets are severe — a potential $750,000 fine and maybe even jail time — as part of the federal Quarantine Act, Travis Shaw, who was signed by the club in December, made his feelings known.

He added to it a few minutes later.

“All summer isn’t going to happen. Not an option.”

The reason Shaw was told two weeks is because that’s all the Blue Jays have in the form of an exemption from the federal government to skirt the closed border and mandatory 14-day quarantine period currently in place, successfully convincing health authorities last week that their modified bubble inside Rogers Centre and the attached Marriott City Centre Hotel would work.

As COVID-19 cases south of the border rise to staggering numbers, the club is hoping to convince the same decision-makers at all three levels that it will work for the regular season, too.

Of course, that would involve the Jays flying in and out of Toronto for road games, as well as eight different visiting teams arriving in the city on a weekly basis, starting July 29 with the Washington Nationals.

Much different than one team being tested rigorously, as the Jays were at their spring training complex in Dunedin, Fla., and never leaving, which is what’s happening currently.

While negotiations are ongoing and there surely could be tweaks to the plan currently in place, the risk involved with the Jays flying to places like Tampa, a virus hotspot and the site of their first regular season game on July 24, is obvious.

The players apparently were not informed by the organization that the quarantine bubble living situation — or something closely resembling it — could be their reality through the Sept. 27 season finale.

It’s hard to chalk that up as an oversight.

Wishful thinking that the virus is under control and the situation will change in two weeks?

The Blue Jays have consulted the players each step of the way, but not mentioning that the quarantine — the only team in baseball to endure this — could be what they face all season is a head scratcher.

Randal Grichuk supported Shaw’s thoughts and added some context in a reply.

“I wanna make it clear, we’re not asking for special treatment,” the outfielder tweeted. “We understand that we need to stay in a “quarantine bubble”. We wanna make sure everyone is safe. The toughest part is them not allowing our family to come with us. That’s what makes it tough for a lot of guys.”

Former Blue Jay Marcus Stroman, who is scheduled to arrive in Toronto  with his New York Mets for a three-game series on Sept. 11, also chimed in about the viability of an entire summer of players being quarantined.

“Guys are going to be walking around in full disguises. Lol,” the opinionated right-hander tweeted at Shaw and David Price, who had retweeted Shaw’s original statement.

The predicament of having a border between them and 29 other MLB clubs is not the Blue Jays’ fault. It’s an unenviable and unfortunate situation for a team just trying to play baseball.

It’s also hard to blame Shaw, even if he went about it in an odd manner, and other players for wanting to see family and envying some of the freedom that Canadians have worked hard to preserve with strict measures throughout this four-plus months of the COVID-19 pandemic.

It’s also an ominous sign for how players might handle themselves on road trips down south, where one innocent misstep could result in an outbreak that ravages a roster.

In the end, it will also be impossible to argue with the Canadian government saying no, forcing the Jays back to Dunedin, or some other as-of-yet undisclosed alternative.

We all want baseball in Toronto, but as Bo Bichette said on Thursday, “this is bigger than us.” ​