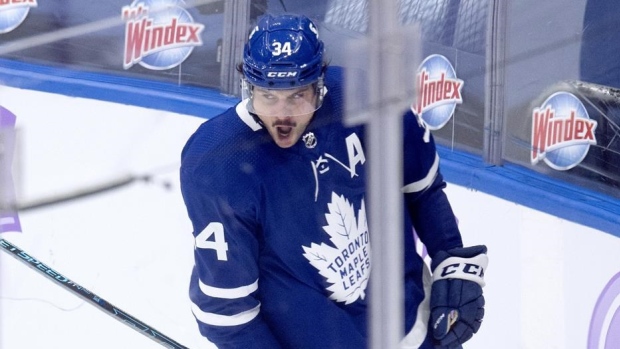 The Maple Leafs held an optional skate at Scotiabank Arena on Friday.

Auston Matthews made a dominant return to the Leafs’ lineup on Monday night, matching a single-game career high with 16 shot attempts.

"It's impressive, coming off a significant injury like that, just his ability to be so impactful right away," said Leafs captain John Tavares. "He's shown it in the past coming off of other injuries ... nothing surprising other than he didn't put a couple in. It shouldn't be too long before those opportunities are going in."

Matthews logged nearly 23 minutes of ice time in the overtime loss to the New York Rangers on Monday, with eight of his shots making it on net. Toronto has had two full practice days and a day off since then.

"I think the schedule playing out the way it has for him is really good," said coach Sheldon Keefe. "He'll be ready to continue on playing the way he was, but I'm sure he'll feel a lot better this time out."

"He's a true superstar and those superstars are always pushing the envelope and trying to get better," Spezza said. "He's come here and looks even better than he has in the past. He's got a great commitment to his game and he's just getting better and better."

Puck drop is shortly after 6 p.m. tonight instead of the traditional 7 p.m. slot.

"You lose the hour, so you'll lose something somewhere," said Tavares of the adjustment. "But we've all played with different timings throughout our careers, so it is what it is and just get ready to go at 6 p.m."

The Leafs requested the earlier start because they will be heading to Pittsburgh after the game on what is their first American road trip of the pandemic.

"They've already briefed me here on some of the different things we'll have to go through tonight in terms of getting to the U.S. and getting off the plane and customs and security," said Keefe. "The first time there's going to be some kinks to work out."

Unlike before the pandemic, the Leafs will need to clear customs in Pittsburgh instead of Toronto, which may cause a delay. The team has to land, get off the plane, go through security and clear customs at the terminal. Then, they have to get back on the plane and taxi to another spot.

"My first time going back to the U.S. this decade, so it's been a while," Tavares said with a smile. "Last year was just so different. We weren't even leaving the hotel [on road trips] so kind of getting back to traditionally what we're used to and different markets and different environments."

Left winger Michael Bunting likes to agitate the opposition. It makes life interesting for his linemates, who find themselves in various scrums throughout the game.

"I got to get my visor cleaned up a little more often," Tavares quipped, "keeps the equipment staff on their toes."

"Plays rough and I like that," observed William Nylander. "We need a guy like that to get under the other teams' skin and rattle them a bit. It's a lot of fun to have a guy like that."

Bunting lives in the blue paint. It's where he scored on Monday night.

"He's always in and around the net and it's always going to lead to those things as teams defend their crease," Tavares said. "He doesn't back down from that ... He's fighting for every inch and every opportunity. I want to be there myself trying to find those opportunities."

Bunting and Nylander are tied for the team lead with two goals.

"He drives the middle, for example, or opens up space in the O-zone, brings guys onto him," Nylander noted. "So, it's been a great connection so far. Hopefully we can keep building off of that."

Travis Dermott had some Pride tape on his stick in Monday's game.

"I just kind of had it in the back of my mind," the 24-year-old defenceman explained. "I had the roll of tape in my tape bag, and I was taping my stick and thought maybe it's something I'll start. We'll see.

"I have some family that is involved in LGBTQ community, so I'd like to step forward and maybe in the future take part in supporting them a little more vigorously."

Openly talking about wanting to step up is huge. Love this. https://t.co/3SKTxaQQ03

Petr Mrazek has resumed skating this week as the goalie works his way back from a groin injury sustained on Oct. 14. He is expected to miss two weeks of game action.

"I would say he's on track," said Keefe of the timeline. "They're very happy with how he's moving."

Mrazek will accompany the team on the upcoming road trip to Pittsburgh, Carolina and Chicago.

"It was a question of whether or not he was going to travel," Keefe said. "They're feeling really good with where he's at, so he is going to travel to spend more time with the team and [goalie coach] Steve Briere."

The Sharks are off to a surprising 3-0-0 start.

"I feel like they're playing with lots of confidence," Keefe said. "I feel like they've found their team identity early and are rolling with it. They're playing really sound team defence, playing as groups of five all over the rink, and their special teams have been very good. Early in the season, those are the things you're looking for to really get firing."

The Leafs, meanwhile, are 2-1-1 with only eight goals scored. So, they haven't established their identity quite yet.

"I feel like we've done good things in good areas, but a big part of our team is executing on offence, and we haven't done that," said Keefe. "Both our special teams, we're still trying to find that as well ... looking to take positive steps in that direction."

Projected lines for tonight's game against the Sharks: