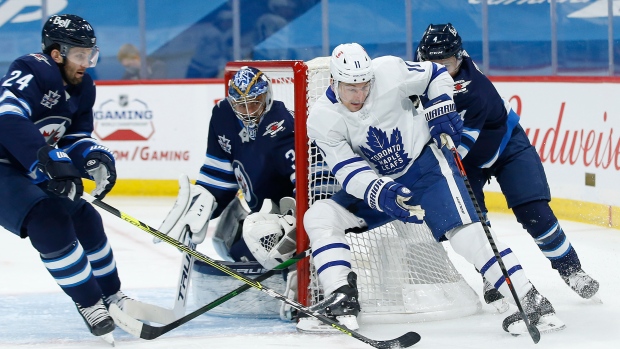 There has been an interesting amount of discussion surrounding the 28-year-old Leafs winger this season – a fifth-round pick and middle-six forward who has carved out an impressive niche as one of Toronto’s most trusted wingers.

That’s not a small accomplishment, either. Say what you will about the structure of this team, but their forward groups are some of the most dangerous you will find in the league, and Hyman is playing a big part.

It is not lost on me, for one obvious example, that Hyman is third on the Leafs in usage across all situations (19.6 minutes per game), trailing only Mitch Marner and Auston Matthews (his two regular linemates) on that front.

Hyman may be the third-most skilled player on his line, but what he adds through the forecheck and his agility off the wing has had a demonstrable impact on the trio’s performance.

In many ways it reminds me of what the Vegas Golden Knights have done with Chandler Stephenson, pairing his unique skill set with two ultra-talented offensive players and betting that the whole would be greater than the sum of the parts.

Hyman has helped entrench himself in the lineup by offering a bit more scoring in recent years. Over the past two seasons, Hyman is averaging about 32 goals and 27 assists per 82 games played, which is a considerable uptick from his first few years at the NHL level. The added individual offensive production is a cherry on the top of his otherwise strong two-way game.

But what makes Hyman fascinating is an increasingly confident case that he makes players – even star players – better when he is on the ice.

If we sample the last three years of play for Hyman at even strength and focus in on Marner and Matthews specifically (Hyman also had some time with John Tavares in recent years, for reference), we can observe his impact accordingly.

Note that I have excluded the Hyman/Matthews without Marner combination due to sample size issues: 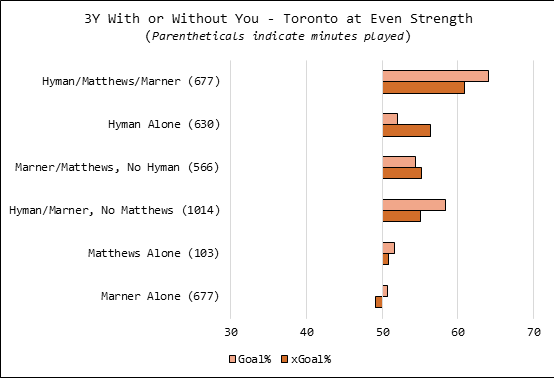 One of the smoking-gun arguments you can make as a player – and quite frankly, it’s the element that every front office is looking for – is that you positively impact the play of those around you.

Hyman’s argument on this front is compelling. The triumvirate of attackers are putting up mind-boggling numbers over the past three years, with expected goal and actual goal rates north of 60 per cent.

But as you break these lines up – injuries, slumps, in-game strategy, whatever – you get to see how players perform in other situations. Take Hyman as one example. We know he can be flexed up and down the lineup aggressively, and we also know that Toronto’s performance with Hyman on the ice isn’t tied to him playing with their two best offensive players.

The other selling point on Hyman’s behalf are those 566 minutes we have seen from Marner and Matthews without Hyman – in these cases, usually playing with one of William Nylander, Joe Thornton, or former Leafs Andreas Johnsson and Patrick Marleau. They have been strong as one would expect, but still in considerable trail of what this year’s trio is doing so far this season.

At minimum, it’s an indication that Hyman is probably the best fit the Marner-Matthews tandem has seen to date.