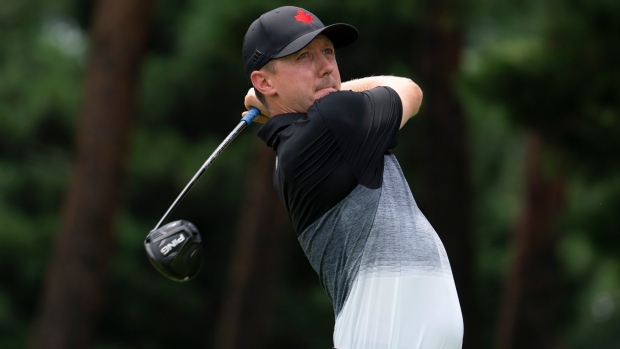 Mackenzie Hughes and Corey Conners were good in the opening round of the Olympic golf competition, but they’ll need to be better if they hope to reach the podium on Sunday.

The Canadian golfers started their Olympic competition at the Kasumigaseki Country Club with matching 2-under 69s, which left them six shots back of the lead.

Hughes bogeyed his third hole after his tee shot found the rough but he bounced back with birdies on the fifth and sixth. He had a similar pattern on the back nine when his tee shot on the par-3 10th hole ended up in a bunker and he couldn’t get up and down. He rallied with birdies on 12 and 13 to reach two under.

Despite being solid with his irons and hitting 16 of 18 greens, he wasn’t able to get enough of them close to allow for birdie chances. He was also one of 32 golfers who had to sit out a two-and-a-half-hour rain delay, returning to play his final three holes.

“I'll be gearing up for tomorrow and I know tomorrow and Saturday will be important for me to get in position for Sunday,” said Hughes. “But I know I played well enough today to shoot 4-, 5-, 6-under. I got a really bad break on 10. My ball was plugged under the lip and I made a great bogey there. But yeah, a few putts fall and you shoot 5-, 6-under par and you're right back in it.”

Conners, who finished his round before the rain delay, played a solid but flat round, not being able to build much momentum throughout the day.

After four pars to open, he made a bogey on the par-5 fifth hole, three-putting from just outside 20 feet. He got that back on the next par-5, the eighth, when he drained a 10-foot putt for birdie.

The back nine was all pars with the exception of a birdie on the par-4 13th and one on the final hole, coming after he rolled in an 18-foot putt.

Conners battled his irons for most of the day, unable to get the ball close to the hole to give him good looks at birdies. The Listowel, Ont., product also missed five greens in regulation but managed to get up and down for par each time. Despite the mediocre iron play, he remained optimistic.

“Felt like I drove the ball really well just didn't give myself the opportunities for birdie that I would have liked with the irons,” he said after his round. “I was just a little bit off on some of those. So, that's the strength of my game. I know I'm going to give myself lots of chances if I keep driving it the way I did today and looking forward to the rest of the week. So it's all good.”

“If there were fans out here I think the majority of the people would have been following our group,” he said. “He’s a wonderful guy to play with.”

Even without the galleries, Matsuyama knew the eyes of the nation were upon him as he tried to post a low score. It appeared he was going to do that in the early going, making birdie on four of his first eight holes. But bogeys at nine and 11 slowed his pace and he finished in the middle of the pack.

“If I say there's no pressure I'll be lying,” admitted Matsuyama. “So, hopefully I'll be able to embrace the pressure and that's upon me and just try to put together a nice tournament here.”

The first-round lead was held by Sepp Straka of Austria, who grew up in Valdosta, Ga., played collegiate golf at the University of Georgia and started his professional career on PGA Tour Canada.

He hit 16 greens and used a solid putting performance for a bogey-free 63 that was good for a one-shot lead.

His finish was somewhat surprising based on his recent play on the PGA Tour where he’s missed the cut in six of his past seven starts.

“I felt comfortable with my game going into this week,” stated Straka. “I hadn't played great over on the PGA Tour the last few weeks, but my putting was really the reason and I just switched up my routine on my putting and it's worked out.”

Adding to the surprise was the fact that Straka only arrived in time to play a single practice round. He competed at the PGA Tour’s 3M Open and with COVID-19 testing protocols, wasn’t able to fly over until Tuesday.

“I feel like we do that a lot, especially on tour,” he said. “I see new courses all the time and usually just get one practice round in. So, I felt pretty prepared coming into it.”

Thailand’s Jazz Janewattananond was a shot back at seven under while Thomas Pieters of Belgium and Mexico’s Carlos Ortiz were two off the lead.