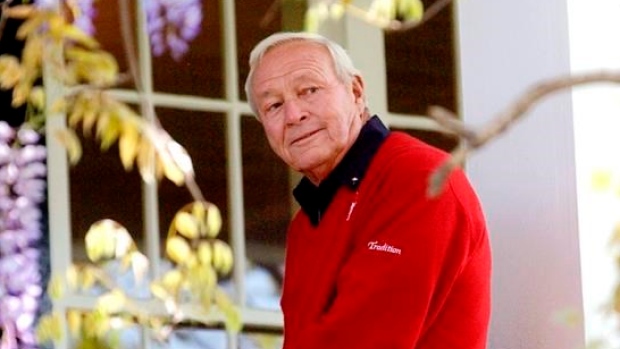 Like so many people, I remember the day I first met Arnold Palmer. I’d been working for SCOREGolf for about two years and they decided to launch a television show, allowing me to be a reporter on that program.

The first assignment was to go down to the Four Seasons hotel in Toronto and interview Arnold Palmer. That was a pretty good way to start my TV career.

Along with my cameraman, we rode up the elevator, walked down a hall and arrived at the room as instructed. I knocked on the door and it opened.

“Hi, I’m Arnold Palmer,” said the legend now standing before me with his hand extended and a smile on his face.

Of course I didn’t need that introduction. I knew he was Arnold Palmer.

Pretty much the entire world knew he was Arnold Palmer. But that’s the way he worked. He was polite, yes, but he was more than that. He was welcoming. For that moment, he made us feel special. The world was about us when it should have been about him.

He invited us into his suite and introduced us to Winnie, his wife. He asked us to sit down and if we wanted a drink. It was like he’d invited us for dinner, not us barging in for yet another interview.

Beyond his golf shots struck with those massive forearms and extra-large hands, more than his changing the game with his meshing of the sport and television, and past his innovative relationship with corporations that still fills the pockets of today’s players, Palmer was a guy who understood that he could make everyone and anyone feel special for a brief moment.

That personal interaction, no matter how brief, no matter whether it was with a plumber from Boise or the president of the United States, never changed.

He could wink at you as he strode up the fairway, or pat you on the back as he passed you exiting a green. He could laugh at a story you told or give you a thumbs up after a booming drive. Everyone who has golfed has an Arnie story.

Here’s another. Palmer, of course, has a connection to Canada. In 1955 the reigning U.S. Amateur champion came to the Canadian Open at Weston G&CC in Toronto and captured his first PGA Tour event. In those days, caddies weren’t the professionals they are today. Most of the time, they were kids from the host club. Ray Slater got the job of carrying Palmer’s bag and was upset at that – the King wasn’t yet the King. Slater had been hoping for Gene Littler’s bag.

But together Slater and Palmer created a team that went on to win. In those days, you couldn’t pay the junior golfers for caddying – they were amateurs. But when Palmer won the tournament, he went into the club office and paid Slater’s golf dues for the next two years.

Fifty years after that win, Palmer was celebrated at Weston where a statue of him holding the trophy was erected. A few months after the festivities, when the course closed and the winds and snows of winter descended, my father went out and put a winter hat and scarf on the statue, took a picture and sent it to Palmer’s office. He never expected to hear anything, but lo and behold, a letter arrived in the mail a few weeks later. It read:

“Dear Bill: I got your photo and smiled. Thanks for taking the time to make sure I stay warm in the winter. Yours very truly, Arnold Palmer.”

My dad, already an Arnie fan, was over the moon.

It was this ability to touch someone that made him one of the most successful athletes of all time, on and off the course.

With a golf club in his hand, Palmer won 92 tournaments worldwide but only earned about $7 million from that. Off it, though, was a different story. Just last year, Palmer collected $42 million in endorsements, course design and licensing his name. At one time, the King owned a slew of Cadillac dealerships across the U.S.  There was also a big chain of Arnold Palmer Dry Cleaners that stretched throughout North America and a clothing line – the Arnold Palmer men’s wear collection – at Sears.

Of course he also helped to start Golf Channel and created the drink now named after him – half iced tea, half lemonade – the Arnold Palmer. This list seems almost endless.

When Palmer put his name on something, people trusted it. Because they trusted him. He was a winner, sure, but more than that he was sportsman, a competitor and a gentleman.

Better than just about any athlete of his generation, he understood the importance of treating the fans with respect. A brief handshake with a guy behind the ropes might not mean that much to Palmer, but to the guy getting the clenched hand, it was a moment he’d never forget.

The King was once signing autographs beside Phil Mickelson when he noticed Lefty’s scribble on a program that looked more like a messy line than a signature. He pulled him aside and reminded him that when these people left, went home and started to look at that program, they’d want to be able to read the autographs and remember who it was who signed them. Mickelson’s signature has been legible every since although still paling in comparison to Palmer’s course in penmanship.

The interview I did that day at the Four Season has somehow survived and my performance is rather cringe-worthy. Palmer, however, could sense my nerves, answered my questions as if I was delivering them like Morley Safer, and made the interview wonderful. He did that in the dozens of times since then when I had the chance to speak with him. Quite simply, he got it. He always got it. Palmer changed the game forever by the way he played and they way he carried himself. But what he changed more than that was the lives of those people he touched. For that alone, he truly was the King.