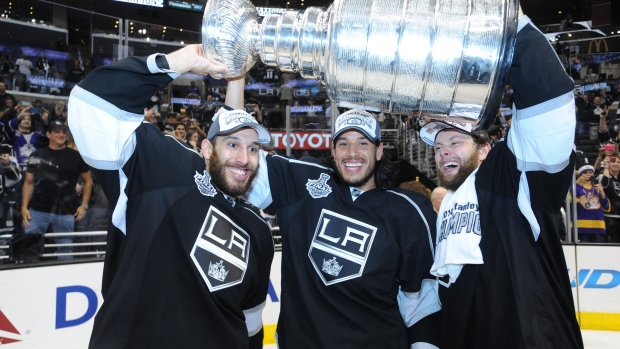 How about getting the hockey juices flowing with the Stanley Cup final teams touring Europe for a September series against Europe's top clubs?

As the NHL and the NHL Players' Association work to finalize an agreement to bring back the World Cup of Hockey in September 2016, a tournament of the top eight hockey nations to be held in Montreal and Toronto, officials with the league and players' union are already musing over other plans to spur revenue.

The NHL has rich, long-term TV contracts in both Canada and the U.S. and it generates billions of dollars from corporate sponsorships, ticket sales and merchandise sales. Several NHL team owners told TSN that the league's biggest unrealized source of revenue is income generated from abroad. North America, after all, represents less than five per cent of the world's population.

"The timing has never been better for the NHL to look at international rights," said Ken Yaffe, a former executive with the NHL who oversaw the league's international business.

"The NHL has labour stability and media rights stability," said Yaffe, who now runs Yaffe Sports Ventures, a New York sports advisory. "The last World Cup, even at the darkest hour of the league, with the CBA expiring a day after the Canada-Finland game in September 2004, was still a bright light for the sport and generated profitability. Now with the great domestic foothold for the league, what better time to look overseas for new ventures?"

To that end, officials with the league and NHLPA have discussed the possibility of establishing a four-year cycle that might see the league continue to participate in a mid-season All-Star Game, the Winter Olympics, a rekindled World Cup, and games between NHL clubs and those from Europe.

One concept discussed would see NHL teams play against clubs in hockey's new Champions League, which was conceived after soccer's hugely popular international tournament of the same name. The Champions League is in its first year and features 26 teams from countries such as Germany, Austria, Finland and the Czech Republic.

"We have been informed by the league and the union that they have not decided about their fall 2015 European plans," said Szymon Szemberg, the Champions League's chief operating officer. "Once they do, we would like to coordinate our plans with them."

To be sure, discussions about new international ventures between the NHL and its players association are in their early stages, and it's possible that the league and NHLPA might decide not to commit to any other international plans until after the World Cup in 2016.

Moreover, organizing international events are complex. Timing is an issue. Some NHL franchise owners would resist the idea of taking a mid-season break in February to play games against European clubs, one senior team executive said, citing insurance and player injury issues.

"This is a league that's still pretty traditional," the team executive told TSN. "You would have some owners questioning any kind of pause in the schedule because it might affect a team's momentum and the teams in the south would resist because that time in February after Super Bowl, before March Madness, is their time to shine."

In 2014, the NHL took a break in February to participate in the Sochi Winter Games. But the World Cup will be held in September 2016, before the start of the NHL season. That's a time of the year that more easily lends itself to be used for international money-generating events, sources told TSN.

"You could easily start the NHL season at the end of October," said one official involved in talks between the NHL and its players' association. "Guys nowadays are coming into training camp in great shape and then for the first month of the season, you have some teams with four- or five-day breaks because schedule makers don't want to go up against the NFL and baseball playoffs.

"That means guys are practicing more during October and the truth is, they don't need it," the person said. "During the shortened season when the Blackhawks won the Stanley Cup, they had one full practice. All year. You know how many full practices they had last year? Two."

International revenue will be crucial, especially for the union in coming years if the league is to expand its $3 billion-per-year business.

The union's licensing revenue is down sharply compared to past years, a source confirmed, because the video-game and trading-card industries have been hurt by an overall slowdown in the economy, limiting their ability to pay rights fees to all sports leagues.

Even if the league and union are able to reach agreements with one another, as well as European teams, over international games in September, there are other possible challenges.

"You have European leagues starting their season a month before us, so you could have those teams taking a game against an NHL team very seriously," a source told TSN. "Then you have the NHL teams who look at this as an exhibition game. And that's how players can get hurt."

The NHL has already toyed with international games. From 2008-2010, after the NHL rejected the proposal of buying the Champions League - a move that would have amounted to a $20 million investment to establish a permanent toehold for the NHL in Europe - NHL clubs including the Carolina Hurricanes, New York Rangers and Tampa Bay Lightning traveled to Europe to play games against local European clubs as well as in NHL regular season games.

"The NHL has made modest investment overseas, but they've been distracted over the past 10 years because for a period, you have had teams in trouble, problems in leadership at the NHLPA and more recently, great success with the outdoor games, which frankly are easier to organize than international efforts," an NHL source told TSN.

The NHL and union in recent months have also discussed the league's future participation in the Olympics.

It's possible that the NHL might decide to limit the ages of players who participate in the Olympics, following soccer's lead. To ensure the World Cup is soccer's marquee property, FIFA only allows three players over the age of 23 to play on each Olympic team.