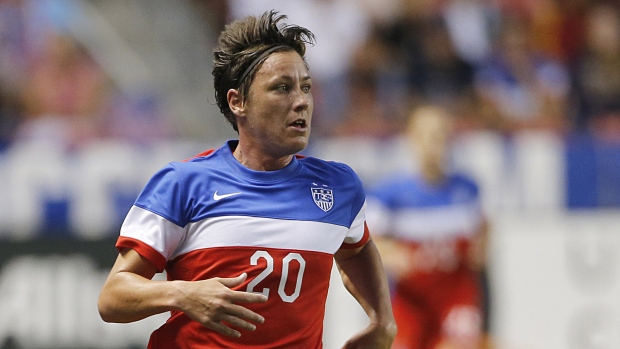 Lawyers for a group of female soccer players who have filed a legal challenge over having to play the Women's World Cup on artificial turf instead of grass have provided the Canadian Soccer Association with a proposal to settle their discrimination case.

Last week, the players filed a complaint with the Human Rights Tribunal of Ontario, charging that they were victims of gender discrimination, since the Men's World Cup is always played on natural grass.

The complainants include Abby Wambach of the U.S. and Germany's Nadine Angerer, FIFA Players of the Year for 2012 and 2013, respectively.

The women contend that playing on artificial turf more frequently leads to injury.

In the 10-page proposal, which was obtained by TSN, lawyers for the players outline several possible solutions to the impasse.

One would be to install temporary grass fields, covering the artificial turf with custom trays, filling those trays with sand and laying grass on top. That would allow grass to take root and let water drain, the proposal says.

"Several companies and experts have offered to discount their time and materials to make a solution as inexpensive as possible," the proposal says. "Businesses and individuals could step up to defray costs through charitable donations. And, of course, the Canadian Soccer Association and FIFA clearly have the financial wherewithal to fund this solution."

It's unclear whether sponsors would be willing to help cover the cost.

In a statement released to TSN late Wednesday, a spokesperson with Amway, a Canadian Soccer Association sponsor, said, "We do not have any input and/or opinion on this matter."

The modular tray system was used at the 1994 Men's World Cup and at the 1999 Women's World Cup, the proposal says, noting that the trays with a sand base and rooted-in grass can be produced within a few months.

"In the week since players initiated legal action against the Canadian Soccer Association and FIFA, the hosts of the 2015 World Cup have lawyered up and done everything possible to slow down a court ruling on whether forcing elite female athletes to compete on game-changing, dangerous, and demeaning artificial turf fields at their sport's preeminent tournament constitutes sex discrimination," Hampton Dellinger, a lawyer for the players, said in a statement.

Dellinger's proposal suggests Canadian soccer and FIFA officials consult with Graff Farms, a Colorado company that owns the distribution rights to XtraGrass, a natural grass system it says is in use throughout Europe and northern climates.

"XtraGrass could be used for high traffic portions of the field, or for the entire field. It does not alter playability, look or feel," the proposal says, noting the grass is typically seeded in spring, so there would be enough time to grow the in-tray grass before the World Cup games next June.

Dellinger and his colleagues said they had consulted with the sod farms, as well as professors of turf grass science at Michigan State University and the University of Tennessee.