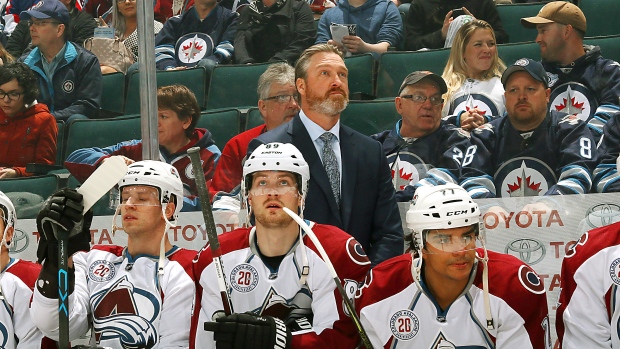 One of the curious things to follow around the league is the justification behind a player’s diminishing ice time.

Often times, it’ll reach a point where someone in the media asks the head coach some variation of the following question: “Why has [the player] dropped in the lineup?”

Answers, obviously, are wide-ranging. Sometimes you’ll hear complaints (accurate or otherwise) about the player’s recent lack of offensive contribution. Sometimes you’ll hear criticisms about the player’s defensive game. In other instances, there’s attribution to a player’s poor work ethic or general off-ice issues that have paved the way for his teammates to gobble up available ice time.

I was curious about whether there was anything in the data from the NHL game sheets that could speak to this issue. In the event that a player’s ice time has been reduced, does it happen to coincide with unsatisfying statistical performance in a specific realm? If so, what are those performance metrics?

For the purpose of this analysis, I pulled all player logs from the 2015-16 season and looked at instances where a player’s ice time had been reduced in four or more consecutive games. In the event any player met that criteria, I then looked at his performance in nine specific areas: Shooting%, Save%, PDO, Goals Per-60, Points Per-60, Goals For Per-60, Goals Against-Per 60, Relative Goal%, and Relative Corsi%.

Here are the results. We’ll start with forwards: 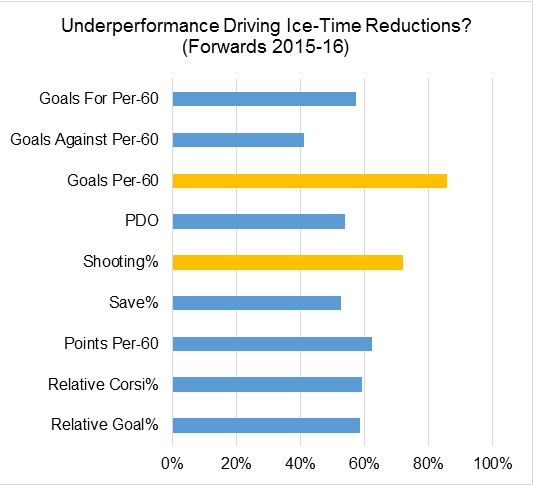 For as much talk as there is about pulling the reigns back on players when they make defensive miscues (sometimes leading to goals against), it doesn’t seem like coaches are overly reacting on that front. Instead they seem to pull the lever whenever a forward goes through a rough scoring patch.

In this instance, about 85 per cent of forwards in 2015-16 who saw their ice-time slipping over a stretch of games just so happened to have also seen their goal scoring (and, by extension, shooting percentage) diminish in the same interval. I don’t think that’s merely coincidence. The rest of the numbers, for what it’s worth, seem to be well within randomness limits.

I’d argue that this is a somewhat expected outcome for forwards. After all, the name of the game is out-scoring the opposition, and forwards are the biggest drivers of that. If you aren’t scoring, you better be generating scoring chances en masse or playing hellacious defence. If not, you’re probably going to drop in the lineup.

But, here’s the curveball. How would you react if I suggested that the findings were fairly similar for defenders? 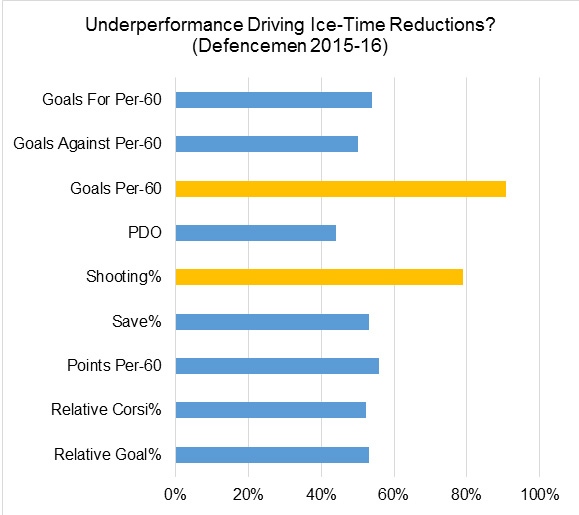 Looks similar, right? Even though defenders aren’t historically the big goal scorers, they seem to see their ice time slip a bit as they continue to be held off of the stat sheet.

This makes me curious about supplemental analyses, because it doesn’t strike me as intuitive that a coach would react (or overreact) to a limited sample of games where a defender isn’t acting as a scorer. I do wonder if the alternative is really driving the findings here. Example: a defender, in an off chance, scores a goal, and then sees his ice time spike as a result. The snowball effect would be his ice time and scoring rates both normalizing, which would create the above result – a defender who sees his ice time dropping coinciding with his goal scoring dropping.

There are still dozens of reasons why a player might drop in the lineup on a nightly basis, but from a 30,000-foot view, it seems to be considerably related to a player’s newfound infrequency at finding the back of the net.