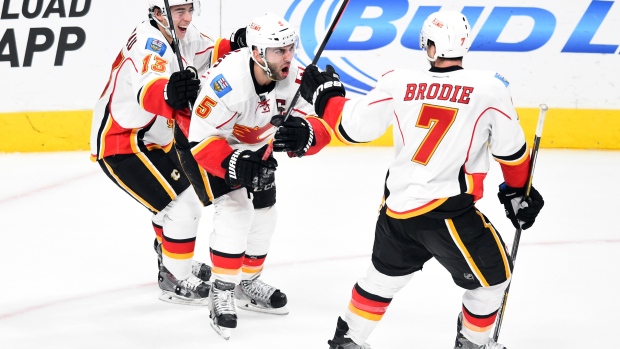 The National Hockey League introduced the 3-on-3 overtime rule in the 2015-16 season, which was designed to marginalize the frequency of shootouts resolving games during the regular season.

The league struck a bit of unintended gold with the decision. The pace and talent on display during the 3-on-3 sessions is incredible and riveting, and, at least relatively speaking, fans see it as a better outcome – one more reflective of actual hockey – than the shootout.

One of the things I find interesting is that the ‘feeling out’ period for 3-on-3 overtime that we saw in the 2015-16 season feels like decades ago. Remember the early period of 3-on-3 strategy? Sidney Crosby liked the idea of deploying three forwards. Barry Trotz played with the idea of utilizing two defencemen. The Calgary Flames actually ran with Trotz’s multiple defencemen idea – likely due to the strength of their blueline – and handed extensive 3-on-3 minutes to the likes of T.J. Brodie, Mark Giordano, and Dougie Hamilton.

Since then, the league has all but settled the matter. Forwards consumed between 60 to 70 per cent of all 3-on-3 ice time for every team in the league over the last two seasons, indicative that the preferred strategy for every team and every head coach remains a two-forward, one-defenceman setup. It certainly makes sense from a balance perspective – you need skilled attackers with so much pace and space, but you also need a blueliner to bail you out when things get dicey in the defensive zone.

But, how is it possible that the two-forward, one-defencemen strategy makes sense for every team in the league? If you are a team that’s been consistently on the losing side of the 3-on-3 format, wouldn’t it make sense to experiment with other options?

Look at the table below. It shows an aggregation of goal-scoring over the last two years in all 3-on-3 minutes. Not surprisingly, there’s a disparity in effectivity: 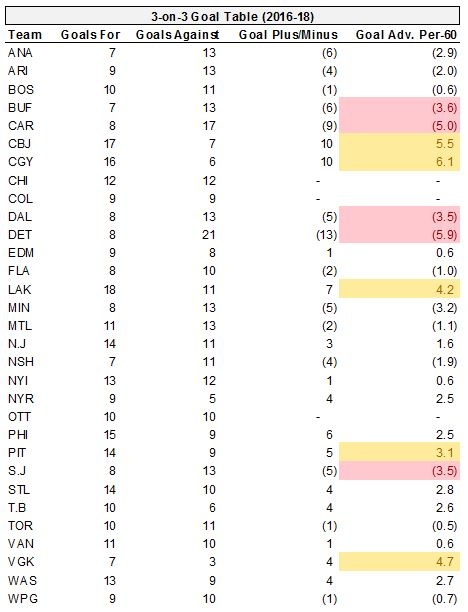 It’s not particularly surprising to see teams like Calgary, Columbus, Pittsburgh and Vegas grading so high here. Those teams not only have speedy and skilled attackers up front, but one or two high-quality defenders they can consistently rotate through until the game ends. I didn’t expect Los Angeles to grade out so well here, but Anze Kopitar and Drew Doughty have played more than half of the team’s total minutes together. When those are two of your three guys, it will drive some favourable goal differentials.

That brings me to the other side. I’m fascinated by Detroit, the league’s worst 3-on-3 team over the last two years. It’s worth noting that this wasn’t one year of randomness – the Red Wings were the league’s worst team by goal differential here in each of the past two seasons. They have also been outshot over that same interval and Corsica’s expected goal model has them in the red as well. So we can reasonably conclude that this is a serious area of improvement for Detroit.

Digging into Detroit’s play a little bit deeper, there is no single area of concern. Red Wings goaltenders have stopped only 77 per cent of shots at 3-on-3 – median save percentage in this game state is around 86 per cent for a frame of reference. But they don’t generate a lot of offence either. Their 10 per cent shooting in 3-on-3 is second worst in the league and they barely generate anything in terms of volume.

If you look at who they are frequently putting over the boards at 3-on-3, you start to see the issue. Whereas most teams can throw one or two superstars on the ice consistently, Detroit just doesn’t have that right now in the player personnel department. Their most commonly leveraged players are a 32-year-old Mike Green, a 32-year-old Henrik Zetterberg who may seriously be considering retirement, and 22-year-old Dylan Larkin. 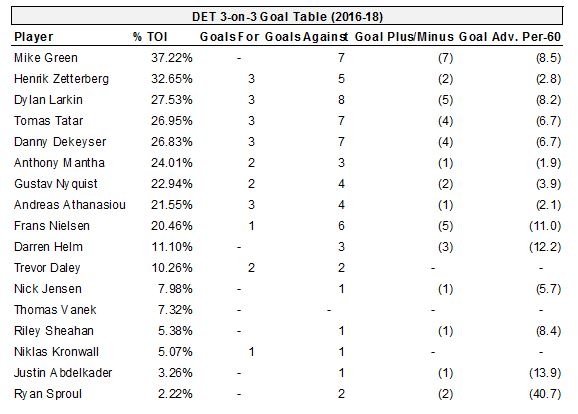 It’s hard to look at this collection of talent and come up with a strong 3-on-3 unit. That’s sort of the reality of the Red Wings in general these days – a team obviously in the middle of a rebuild and hoping to come out of it in the next couple of seasons.

But in the meantime, it raises the question: If you don’t have the requisite talent pool to deploy a competitive 3-on-3 roster, what do you do? One of the things I’ve wondered for teams like Detroit – and others – is if it makes sense to experiment with other types of deployment. There are only so many variable two-forward, one-defender combinations you can come up with for this year’s roster and none of them are particularly impressive. Wouldn’t it make sense to play around with a three-forward lineup – one that could surely generate more offence down the middle and speed on the wings? Or, alternatively, a more conservative two-defencemen lineup that keeps the goals against column suppressed, at least enough to get things to the shootout environment?

At the very least it’s something I would consider if I’m Jeff Blashill or a handful of other coaches around the league. The entire league has shifted towards a two-forward, one-defenceman lineup and you can’t help but wonder if there’s a bit of a groupthink factor at play here.

It reminds me an awful lot of the NBA’s small ball revolution. It works unbelievably if your team is loaded with elite guard play and stretch big men, and has rendered teams like the Houston Rockets and Golden State Warriors virtually unbeatable. But most teams simply can’t replicate that style of play. And to that end, why play the role of copycat? Sometimes, counterstrategy can pay similar dividends.