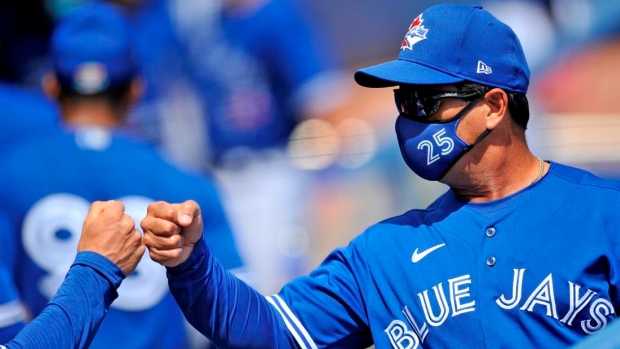 Rising expectations for the Toronto Blue Jays as a franchise inherently puts more pressure on the manager.

Managing through a rebuild is one thing, as is making a surprise run like the Jays did in the shortened 2020 season.

But the day-in, day-out decisions are under a different type of microscope for a manager who’s supposed to have his team in postseason position in late September.

Charlie Montoyo is about to go through that, but his bosses made life a little bit easier this week, picking up the 55-year-old’s contract option for the 2022 season.

That simple paperwork move takes some of the stress and uncertainty of lame duck status off the third-year skipper’s shoulders heading into a 2021 campaign that will be unlike any other he’s experienced thus far.

Lauded for his communication skills when hired by GM Ross Atkins and Jays president/CEO Mark Shapiro on Oct. 25, 2018, Montoyo has become an easy guy to play for and the Puerto Rico native’s impressive job keeping his ball club together through a trying 2020 season did not go unnoticed.

Atkins explained the things he’s seen that led to the decision to give Montoyo a fourth year at the helm of an up-and-coming team that is now expected to be an annual contender.

“What have we not seen?” Atkins said. “He’s very steady in-game. His instincts are incredible. His collaboration with all of his staff has just continued to be a strength.

The character, the ability to create a very positive, constructive environment is very encouraging. Like I said, I couldn’t be happier working alongside him.

“Like any employee, we are 100 per cent committed to a long-term relationship and very excited about the progress of this team, of this organization, and he’s been a huge part of that. Love working with him every day. Love seeing him every single day. I have an incredible dynamic and feel very good about our future together.”

Montoyo was informed his contract option was being picked up earlier this week in a meeting with Atkins, adding there has not yet been talk of any sort of extension beyond 2022.

“We just talked about the job that I’ve done and what we need to do going forward, but, no, nothing like that,” Montoyo said after Tuesday’s Grapefruit League win over the Philadelphia Phillies. “Then, of course, he told me he was picking up my option. It was a really good conversation.

“This organization gave me my first chance to manage in the big leagues and I will always be grateful to Mark and Ross for that,” he added. “I’m just proud of the job that our coaches and players did last year under difficult circumstances. It was a tough a year and we battled.

“We still have a lot of work to do. I’m glad they showed confidence by picking up my option and I’ll do my best to contribute to our goal of winning a championship.”

Montoyo’s 32-28 campaign last year earned him a third-place nod in the manager of the year race — I was a voter and had him third on my ballot, as well, behind eventual winner Kevin Cash and Rocco Baldelli, both good friends of Montoyo — which was deserved recognition for the leadership he provided as the Jays searched for a home and ended up playing out of a Triple-A ballpark in Buffalo.

Even if Montoyo was often criticized for some of his in-game manoeuvring — and will continue to be — that just comes with the territory.

Cash, after all, took home the award for Most Criticized Manager of the Year in October when he lifted Blake Snell in Game 6 of the World Series, far too early in the opinion of most.

That .667 winning percentage suddenly meant nothing. Cash went from creative genius to dummy in an instant.

As they say, players make managers look smart and had the Rays’ bullpen executed, it would’ve been a non-story. Criticism is extremely easy in hindsight, especially from the couch … or the press box.

But the role of manager has changed a lot in the analytics era, with most moves pre-planned to a certain extent on matchup statistics and scenarios, especially when it comes to bullpens.

That doesn’t mean they shouldn’t be criticized when they don’t work, but oftentimes they are organizational decisions and not one man in the corner of the dugout with a pack of chewing tobacco listening to his gut like days gone by.

That’s also not to say there aren’t times Montoyo makes a call on a pinch-hitter or a reliever by himself in a certain scenario and simply lives with the decision.

These days, the manager is a tone-setter and a fire extinguisher.

His 18 years of experience managing in the Rays’ minor league system was a great way to prepare him for today’s game, where rosters change daily and players come and go.

“It’s almost the same way at the Triple-A level,” Montoyo said. “You’ve always got to communicate because there’s so much movement and somebody gets called up and now you’ve got to talk to the other guy because he’s upset he wasn’t the guy. It’s almost the same way in the big leagues — you’ve got to communicate. Players want to know where they stand at all times when it comes to lineups or why he’s not playing, you have to be good at it. That’s one of the keys to managing in the big leagues. I saw that with the Rays and it’s the same everywhere. Communication is key.”

Managing 26 different player personalities at a time, plus communicating with a coaching staff that numbers in double digits, as well as dealing with the media daily from mid-February all the way through October, as the Jays hope, is not easy.

Trust me, it’s a grind across potentially 200 games. The questions and constant prodding become tedious even for the question-askers after a while.

Montoyo deals with it graciously, and has even shown some fire in shooting back from time to time, which is more than welcomed.

He’s also learned how to use his daily post-game briefings to light a fire under his team and there are a couple of on-the-record F-bombs as evidence.
It’s nothing new for Montoyo.

It’s also evident that Montoyo is becoming more comfortable as the seasons go by.

“It’s like any role in sport, in business, we all get better at our jobs, we all improve no matter how much preparation and experience you have, which Charlie, I think, had as much preparation and experience managing as you could ask for, but it’s still very different when you’re leading an organization the way that he is,” Atkins said. “He’s embraced it. He’s embraced it with humility. He’s embraced all the challenges with an open mind and incredible character. He treats everyone the same and I think our players really appreciate that.

“He’s just a very fair, consistent human being that sets a great tone for our environment.”

With Montoyo as the guiding hand, the Jays have gone from a rebuilding environment to a competitive environment.

By far the most difficult step to take is turning that into a championship environment, a challenge that Montoyo now faces.