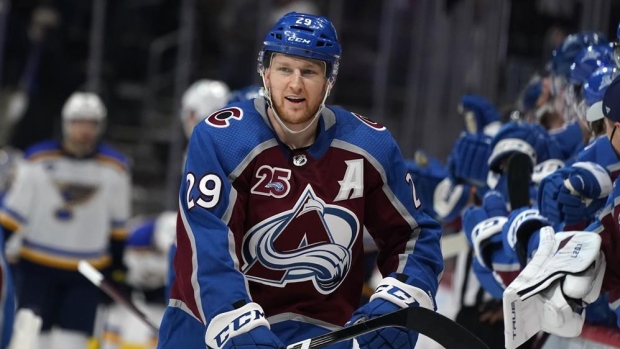 TSN Toronto Reporter Mark Masters reports on the Maple Leafs. The Leafs (optional) and Colorado Avalanche skated at Scotiabank Arena on Wednesday ahead of tonight’s game.

Nathan MacKinnon will return to the Avalanche lineup tonight against the Maple Leafs for the first time since suffering a lower-body injury on Nov. 6.

"He's raring to go, let's put it that way," said Colorado coach Jared Bednar with a smile. "He does not like sitting. He does not like [it] when he's not on the ice ... He's just anxious to get back in and help us."

"You're aware of the threat and the boost that it gives to Colorado," said Leafs coach Sheldon Keefe, "but we like to play against the best. We should be excited by the opportunity to compete against him."

MacKinnon has one goal and nine assists in eight games this season.

"I got COVID at the beginning and then I got hurt so I'm looking for timing, getting into a rhythm," MacKinnon said. "I'm excited. The boys have won seven [of eight] games since I've been out. It's been great to watch and excited to keep this thing rolling and it's a fun place to jump back in with family and friends here."

The Leafs have won 14 of their last 16 games thanks to a consistent commitment to defence. But they haven't seen an offence like Colorado's.

"Today it will be put to the test more so than anything we've seen," Keefe said. "They have really dynamic forwards that are game breakers, but the most unique thing about this group is how dynamic their defence is. Cale Makar is leading their team in five-on-five goals. I don't know how many teams where that's the case. Their defence is extremely active, extremely fast, dynamic, they make plays all over the ice. They stress you on the rush. They stress you with their play in the offensive zone. It will be a big challenge for us here to manage that."

Makar leads all NHL defencemen with nine goals. Eight of the goals have come at even strength.

"He's been the best D in the league for two years now," MacKinnon raved. "I thought he should've won the Norris [Trophy] last year. He's probably going to run away with it this year."

Bednar believes Makar can become the first defenceman to score 30 goals in a season since Washington's Mike Green in 2008-09.

"Even if he goes through a patch without scoring, he just has that ability, like we saw last week, to all the sudden bang in a couple a game," Bednar said. "We've talked in depth about him continuing to shoot the puck and not defer to other guys even if it's our top line. He's equally as dangerous and when he gets to scoring areas to just let it go. He's a guy who can score from distance, which always helps. Yeah, I don't see any reason why he can't."

Makar is the face of Colorado's blue line, but it's a deep group. Partner Devon Toews already has three goals and 10 points on the season.

"I think we have the best first pair in the league with Taser and Cale," MacKinnon said.

Bowen Byram and Samuel Girard make up a solid second pair. With Ryan Murray out, Jack Johnson draws in on the third pair tonight alongside Erik Johnson. These guys can dance, especially on the attack.

"When they get in the offensive zone, it's like there's not any positions," Matthews said. "Everyone's filling in spots and roaming around creating all this movement and it's hard to defend."

"From my eye, they lead the league in back-door, open-net tap-ins," Keefe observed, "and a lot of that is because you get drawn to the motion and to the speed and to how dynamic their defence are so you end up chasing them around. So, it's a matter of us finding our structure and trusting our structure."

Nazem Kadri will play his second game in Toronto since the Leafs traded him in July of 2019. The centre produced 17 points in the eight games that MacKinnon missed and is up to fourth in league scoring with 27 points in 18 games.

"You know when he's playing good, that's for sure," Matthews said with a smile. "He's confident. I mean, he's always confident, but obviously when you're playing like he is, he's definitely got a little bit of extra pop in his step."

Kadri is in the final year of his contract.

"Obviously with the situation I'm in, I wanted to give it my all and be super focused this year and try to give my team the best opportunity to win," the 31-year-old said.

"He's having an amazing season," MacKinnon said. "What he brings in the locker room is really important. He brings a swagger to the team, a lot of confidence and a lot of grittiness, too. He's got some funny chirps. I wouldn't go to battle chirping him for sure, you're going to get roasted."

What's the best chirp MacKinnon has heard from Kadri?

"He told a guy he can do his laundry and that's about it and he'll fight him if he plays eight minutes tonight," MacKinnon said with a chuckle, "but his delivery is a lot better than mine. I'm not very witty. His delivery is amazing."

"He's a guy you really loved to have on your team," said Matthews, "but not so fun to play against."

Matthews may make a fun target for Kadri tonight. This will be his first game without a moustache since the 2018-19 season.

"I saw a picture of him and kind of looked photoshopped almost," Kadri said. "I'm just so used to seeing him with the muzzy on."

What chirp can he come up with for that?

Matthews had promised to dust the duster if he reached his fundraising goal ($134,000) as part of the Movember campaign.

"It feels a little different," he said. "I think it's going to take a little time for me to get used to. Everybody kind of gave a little double take. It definitely feels weird. It's been a while."

"He sent a picture in the group chat yesterday," said defenceman Rasmus Sandin, "but it looks a bit different in reality."

"It's different," said Keefe. "Was asking who the new guy was in the meeting."

"I didn't feel like myself when I saw it off," Matthews said, "it might take a little time to get used to this feeling again."

"Hopefully without the muzz he can keep scoring," Sandin added.

This is Sandin's first full season as an NHL regular, but he's already created a lot of excitement in the market. In fact, a few months back a fan created a song about Sandin using the music from Rasputin.

"I saw it," the 21-year-old said with a smile. "I went on Twitter one day and I was tagged. It was funny to see that someone takes the time to make a little song, but I loved it."

the fact that rasmus has seen this and thought it was funny 😂 pic.twitter.com/S9bqU6vPiM

"A little bit. I mean, the fans are passionate and love the game of hockey, but, yeah, I was little surprised. You know, never really experienced that before."

Has he found himself humming it at all?

"Not yet, but we'll see," he said. "My brother [Linus Sandin] heard it too so in the gym, a couple times this summer, he put it on just to make fun of me a little bit. It's catchy."

His dad, Patric, is also a fan.

"He loves it. When someone calls, that's what comes on."