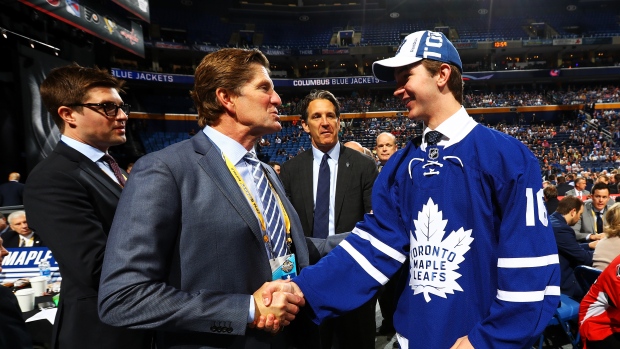 TORONTO -- When it comes to organizational depth at goaltender, the Maple Leafs aren’t exactly brimming with options. That’s what makes goaltending prospects Joseph Woll and Ian Scott so intriguing.

The netminders, both 20, are on the cusp of beginning their professional careers after successful tenures in the NCAA (Woll was a three-year starter at Boston College) and the Western Hockey League (Scott is the reigning CHL Goaltender of the Year for the Prince Albert Raiders).

While neither player will make an immediate jump to the NHL, by this fall they could both be playing for the American Hockey League’s Toronto Marlies in a first step towards one or the other cementing himself as part of Toronto’s long-term future in the crease.

As it stands now, the crop of eligible goalies behind starter Frederik Andersen consists of last season’s backup Garret Sparks (whom TSN Hockey Insider Pierre LeBrun reported mid-month to be on the trade block), and prospect Kasimir Kaskisuo (no NHL experience).

Then there’s Woll and Scott, waiting to scale this next challenge together.

“I think having that competition is awesome,” said Woll after the Leafs’ development camp session on Tuesday at Ford Performance Centre. “On the ice, you’re fighting for your spot, but the hope is you can be friends off the ice and grow that relationship. You want to play for the Leafs obviously, but you want the Leafs to be as good as they can be, so you’re pushing each other.”

On the surface, the biggest similarity between affable, Missouri-bred Woll and soft-spoken Calgary native Scott could be their mutual goal of being a Leaf. But the two became fast friends and Woll struggles to find much separating them on the ice now.

“I honestly think we’re pretty similar goalies in how we approach the game,” he said. “I’ve seen myself grow and mature my game, and it’s the same way that he’s grown as well and that’s awesome to see. I think I’ve calmed down a lot and honed my athleticism to only use it when I need it, and that’s something that he’s been great at. It’s tough for me to pick out one thing that’s different.”

That may be true, but Scott is holding a big lead in hardware. Last month, Scott became the first goalie in Raiders’ history to be named the CHL Goaltender of the Year after his 38-8-3 regular season with 1.83 goals-against average and .932 save percentage.

Prince Albert won the WHL championship last season – Scott was named MVP of the playoffs – but the Raiders then failed to earn a victory during a disappointing Memorial Cup showing.

Scott takes no credit for his breakout campaign (“I wouldn’t have had the season I did without the guys on my team”), but has a good idea of what it will take to succeed in the AHL.

“Having the confidence I did during the season, that’s something I’ve learned to manage and be able to control,” he said. “Moving forward, I’m able to control how my confidence is and what I can do to make myself play at such a high level.”

That includes heeding lessons from Raiders’ coach Marc Habscheid about nutrition and training. One of Habscheid’s suggestions was to enlist a psychologist last season, and Scott said those visits made a difference.

“That played a huge part this year, just in staying consistent and keeping my confidence game in and game out,” Scott said.

After three seasons with the Eagles, Woll won’t be returning to campus for his senior year, instead finishing his final three classes online to secure a degree. He leaves BC on the heels of a 37-start season, with a career-best 2.41 goals-against average and .919 save percentage.

Having spent a couple weeks with the Leafs last spring ahead of their first-round Stanley Cup playoff series, Woll knew he was ready to start chasing down his next dream, with Scott doing the same right beside him.

“I think everyone coming in is aiming to play for the Toronto Maple Leafs, and that’s my end goal, to make an impact for the team and the city,” said Woll. “But I understand however it goes, I have to control what I can and just show them my best.”​