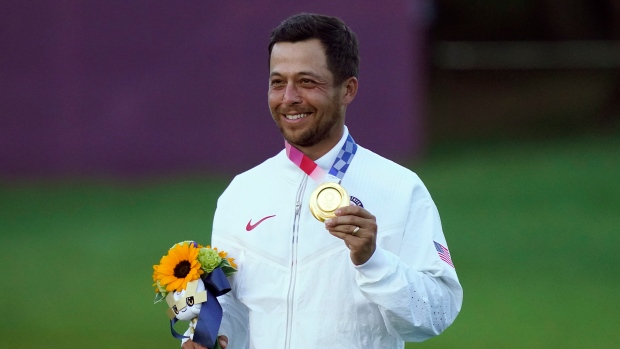 Xander Schauffele may not have a major title, but now he’s golden.

The American golfer who has come so close so often to capturing one of golf’s four major titles, played a clutch wedge shot on the 72nd hole to earn a one-shot victory and Olympic gold on a wild final day.

“It's special,” said Schauffele. “That's a word that's thrown around a lot, especially for us golfers, I mean it's so different for us, we're used to playing for money and we play a normal schedule and this is every four years and it's just kind of a different feel to it. And you're wearing your country's colors and everyone's just trying to represent to the best of their ability. So it does have that sort of special and different feel.”

The victory was a poignant one for Schauffele, a 27-year-old Californian who has finished in the top 10 in nine of the 18 majors in which he’s played. His father, Stefan, was an Olympic hopeful in the decathlon for Germany but his chance at being the Games ended when he was hit by a drunk driver and part of the windshield stuck in his eye, blinding him.

As well, his mother, Ping-Yi Chen, moved to Japan from Taiwan and was raised in Tokyo, where Xander’s grandparents still reside.

“They're not very far away,” Schauffele said of his relatives. “Hopefully I can sneak and see them but probably not. I'm probably going to have to FaceTime or something. And to have my dad here as well is really special. I gave him a hug off the back of the green there, I know this means a lot to him so I'm just happy to sort of deliver this.”

Schauffele took a one-shot lead into the final round and looked as though he would cruise to the finish line after playing the front nine in four under.

As he was making the turn, Rory Sabbatini, a 45-year-old who was born in South African, lives in South Florida and in 2019 took out Slovakian citizenship to appease his wife, a native of that country was finishing up a red-hot round of 61 that included 10 birdies, two bogeys and an eagle.

His score of 17-under stood as the low round in the clubhouse for close to an hour as Schauffele, Paul Casey and Hideki Matsuyama, playing together in the final group, battled on the back nine to match or pass it.

Schauffele kept his nose out in front but on the 14th hole, his tee shot sailed right and into deep foliage, necessitating an unplayable lie penalty. He managed to make a bogey after a good wedge to five feet.

That dropped him into a tie with Sabbatini but he regained top spot with a birdie on the 17th hole. On 18, however, the wide-right tee shot returned, requiring him to chip out to the fairway leaving him 98 yards from the hole. And again, he used his wedge to near perfection, hitting his shot past the pin and sucking it back to four feet. He calmly rolled that in to secure the gold medal.

“I was trying so hard to just stay calm,” Schauffele stated. “Hit a terrible drive on 18, had to make a sort of sloppy par and fortunately hit it close enough to sort of have a high-percentage putt at roughly four, five feet. But, man, it was stressful.”

Sabbatini earned the silver medal, which seemed out of reach at the start of the day.

“Crazy game this sport we play,” said Sabbatini. “So somehow found that golden egg today and I managed to get something achieved which I didn't was possible after yesterday.”

CT Pan of Chinese Taipei captured the bronze medal after winning a seven-way playoff that required the participants to play in two groups.