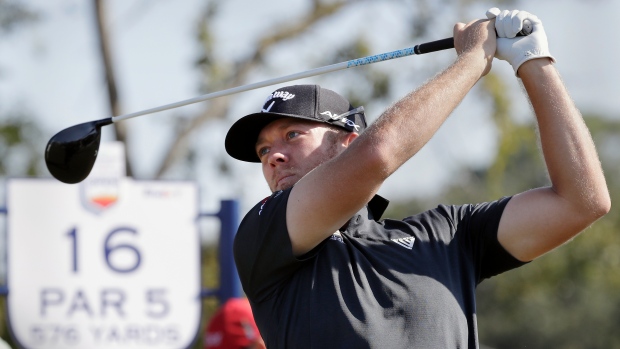 ST. SIMONS ISLAND, Ga. — A strong wind off the Atlantic Ocean swept over Sea Island on Friday, and it was no problem for Talor Gooch of Oklahoma as he handled the exposed Seaside course for a 5-under 65 to take a one-shot lead in the RSM Classic.

As expected, the balmy conditions of the opening round that led to record scoring gave way to 40 km/h wind and chilly temperatures.

“The only commonality between yesterday and today is that we played 18 holes,” said Zach Johnson, who lives at Sea Island and toiled for a 1-under 71 on the Plantation course to finish three shots behind.

He was one shot ahead of John Huh, who had a 67 at Plantation, and Sebastian Munoz, who went from a 60 at Seaside to a 70 in the second round at Plantation. Moore and Mackenzie Hughes of Dundas, Ont., (68 at Seaside) were two shots behind.

Corey Conners of Listowel, Ont., is in a group tied for ninth, four shots off the pace, while Adam Hadwin of Abbotsford, B.C., is tied for 15th. Taylor Pendrith of Richmond Hill, Ont., and Michael Gligic of Burlington, Ont., are in a group tied for 39th. Roger Sloan of Merritt, B.C., is down in 52nd, while Adam Svensson of Surrey B.C., and David Hearn of Brantford, Ont., didn't make the cut.

Gooch has been trending up. He’s 14th in the FedEx Cup and has a pair of top-five finishes at the Fortinet Championship to start the season and the CJ Cup in Las Vegas. Still seeking his first win, Gooch hasn't missed a cut in six starts this fall and has finished 11th or better four times.

“It’s just comfortable,” he said. “Obviously I’m playing well, but I think my game has made a turn for some good stuff in some ways. And I’ve been working my butt off for years, but especially the last six, eight months with driving the ball and working my butt off with putting. For my game, if I can get in the fairway ... it’s just a matter of how many putts I’m going to make. Hopefully we can keep making putts and see if we can do some good this weekend.”

Gooch highlighted his round with an eagle putt of just over 65 feet on the par-5 seventh, the longest putt he has made in his PGA Tour career.

“Any 66-footer, you’re just trying to two-putt, right?” he said. “But my speed’s been pretty good this week and I actually made about a 50-footer yesterday, so I’ve been comfortable on these greens from long distance. You’re always stealing one when you get those to drop though.”

Gooch made only one bogey, no small feat under the conditions, and four of his five birdie putts came from six feet or less.

Munoz, who matched the tournament record with a 60 in the first round at Seaside, birdied his last hole to share second with Huh.

A day after half the field at the Seaside Course broke the scoring record with an average of 66.31 — the second-lowest on the PGA Tour since 1983 — the other half averaged more than four stokes higher at 70.96. The average score on the Plantation almost increased by four shots, going from 68.70 to 72.68.

The cut was at 4-under 138. Among those making it to the weekend was 57-year-old tournament host Davis Love III with birdies at Nos. 13 and 15 for an even-par 70 at Seaside. Also making the cut on the number was Adam Scott, who needed birdies on three of four holes on the Plantation back nine for a 71.

Among those missing the cut were major champions Jason Day, Lucas Glover and Graeme McDowell, as well as defending champion Robert Streb. He beat Kevin Kisner in a playoff last year. Neither will be around for the weekend.

Johnson, meanwhile, is trying to break the “Sea Island curse.” None of the players who live in the area have been able to win the RSM Classic in its first 11 years. That group includes Matt Kuchar, Harris English, Brian Harman and Hudson Swafford, all PGA Tour winners.

“Well, it’s hard, it’s hard to win,” said Johnson, who was in the final group in the final round last year, but finished three shots outside the playoff between Streb and Kisner. “Maybe there’s a little bit of added pressure because of who you’re playing in front of and that kind of thing. I think it’s going to happen. ... I think the odds are in our favour.”