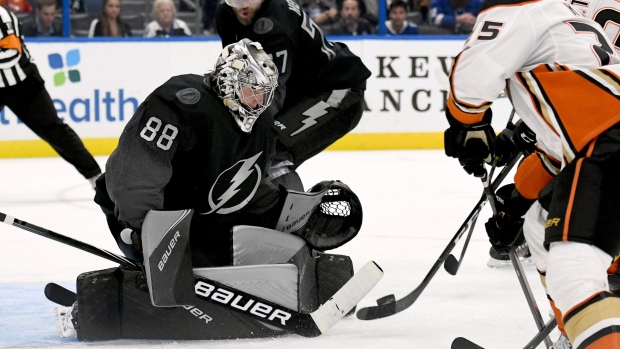 “(Bishop) was like a mentor,’’ said Vasilevskiy, who was playing in his 222nd game. “I thank him and it’s nice to pass him, but that’s now in the past and hopefully more wins to come.’’

Brayden Point had two goals, and Nikita Kucherov, Pat Maroon, Anthony Cirelli and Ondrej Palat also scored for the Lightning, who have won five of their last seven games.

Derek Grant had a short-handed and Rickard Rakell also scored for Anaheim. Ryan Miller finished with 21 saves as the Ducks lost for the eighth time in nine games (1-5-3).

“I expect more out of our group,’’ Anaheim captain Ryan Getzlaf said. “It’s disappointing when we play so well. I thought we started the game properly, worked hard, battled hard, fought some adversity. … They got a power play that was kind of a (questionable) call and they scored a goal and then we quit. Simple as that.’’

The Ducks trailed twice in the first two periods, only to answer both times within three minutes.

Point’s second of the night and seventh of the season gave the Lightning the lead for good with 7:21 left in the second. He took a pass from Victor Hedman, rushed down the right wing side and put a shot under Miller’s arm for his second multi-goal game of the season to put Tampa Bay up 3-2.

The Lightning would tack on three more after that, all of them on rebounds right around the crease.

Maroon pounced on a rebound on Mikhail Sergachev’s shot with 5:35 left to make it a two-goal lead. Tampa Bay scored three times on five shots in the period.

Cirelli got his fifth of the season, giving him goals in four consecutive games, at 6:20 of the third, and Palat added the 100th of his career, on a power play, with 2:33 left to cap the scoring.

“We’ve got to be committed to it for 60 minutes because the proof is there,’’ Getzlaf said. “High flying team that likes to play offence and they got little, 5-foot-10 guys shooting at the back of our net from inside our crease. If we’re not going to be big enough and strong enough to play in front our net we’re never going to win anything.’’

The Ducks’ fell to 2-5-3 in November with the only regulation win coming at St. Louis on Nov. 16.

Point opened the scoring with 3:52 left in the first when Jan Rutta’s shot from the point was knocked down in the crease and Point popped the loose puck in.

Grant answered that 1:52 later when Kucherov’s pass attempt hit the shin of linesman Derek Nansen and bounced to an open Grant, who beat Vasilevskiy with a long-range wrist.

Kucherov put the Lightning back in front as he came off the bend to take a feed from Anthony Cirelli and beat Miller at 5:28 of the second.

NOTES: Anaheim D Hampus Lindholm returned after missing eight games with a lower body injury. ... Tampa Bay captain Steven Stamkos was scratched with a lower-body injury. ... Long time NHL executive and seven-time Stanley Cup winner Jimmy Devellano, a winter resident in the Tampa area, attended his first game at Amalie Arena since undergoing brain surgery. ... Kucherov returned to the lineup after missing Thursday’s game with an upper-body injury. Hedman and LW Alex Killorn each extended their point streaks to seven games. ... Anaheim’s five short-handed goals are tied for the most in the league.