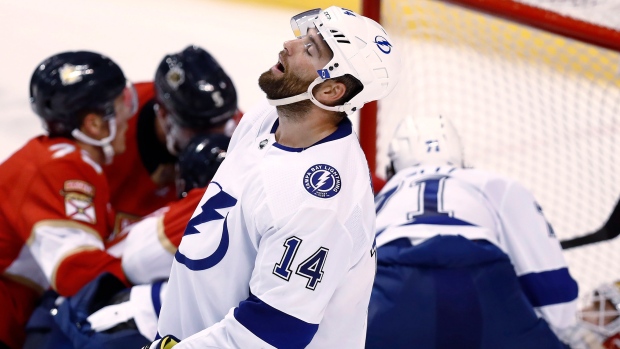 Patrick Maroon looks up in disbelief , The Canadian Press

“I think we just got too comfortable in the regular season,” the reigning Vezina Trophy winner said last month at the NHL’s Player Media Tour in Chicago.

If that was the case, Tampa Bay might already be in good shape.

Just three games in, the Lightning are feeling a discomfort that was absent all of last season, until that perfect storm struck over seven days in April.

The temperature has been turned up with a 1-1-1 start, as they prepare to face one of their Atlantic Division rivals in the Toronto Maple Leafs on Thursday night.

Captain Steven Stamkos called out his teammates - and maybe even the coaching staff - when he put his team on blast after an overtime loss to the Carolina Hurricanes on Sunday. Tampa Bay was outshot, 43-13, and managed just two shots in the final two periods.

That forced Vasilevskiy’s new backup, Curtis McElhinney, to turn aside 40 shots in his Lightning debut – against his former team.

“We just continue to be the freewheeling team that thinks we can just come into games and win because we’re skilled,” Stamkos told reporters. “We keep falling back into the same old habits that we’ve been doing, that cost us the season last year.

“He’s right,” Cooper told reporters. “Steven’s not pointing fingers, he includes himself in that. His [words] ring true. We all have to be better.”

Cooper admitted that the Bolts are still lugging the baggage of last season with them.

“I would be lying if I didn’t think that there’s a burden being carried over,” Cooper said. “If we’re fortunate enough to make the playoffs, and if we do win a round, we’re probably going to hear it all the way until then.

“But as we talked to the players, we can’t change last year. We’re defending nothing. So let’s go and attack.”

It’s actually defending the attack that plagued the Lightning last year and has continued to plague them through their first three games.

Despite being a true possession team, the Lightning were average (12th) in number of high-danger chances allowed last season. They are tied for 17th this season, according to NaturalStatTrick.com.

The Lightning were also 29th in goals allowed off the forecheck (read: turnovers) last year, according to The Point Hockey.

The truth is that Vasilevskiy’s Vezina season, with six shutouts and a .925 save percentage, largely papered over a lot of those glaring mistakes.

But Cooper demurred slightly when asked about Tampa Bay’s sluggish start: “Listen, the way we’ve started this season is very similar to the way we started last season. We all try to kind of find our way with how the game is going.”

That is only partially true. Tampa Bay lost their second game to Vancouver, then thrashed Columbus, 8-2, in the third and collected points in six straight games to open 7-1-1.

What followed was one of the best regular seasons in NHL history – a 62-16-4 run that tied the 1995-96 Red Wings for most wins ever – and the Presidents’ Trophy.

Vasilevskiy admitted that the Lightning were chasing the Red Wings’ mark.

“Because the regular season was great and we were on a good run, our tank was empty,” Vasilevskiy said last month. “We just went straight down because of that. I think that in our heads, our thoughts were that, ‘Oh, we’ll be all right because we’re doing great in the regular season.’

“But the reality is that the playoffs, it’s way different hockey. We just weren’t ready for that.”

This year’s team is different, Cooper reminded reporters Wednesday. He pointed out that the Bolts had eight different skaters in their opening-night lineup compared to a year ago. Ninety-two-point man Brayden Point will make his season debut against the Leafs after rehabbing a hip injury.

Gone are J.T. Miller, Dan Girardi, Ryan Callahan and Anton Stralman, among others.

“When you take out guys that had a major voice in the room, they’ve got to be replaced,” Cooper said. “We’re a completely different team. When we’re rolling, teams will say it feels like there’s six or seven [Lightning] players on the ice. We were definitely not playing that way the other night.

Dealing with these challenges now should ultimately work out in the Lightning’s advantage. It might even cause them to avoid the hardware Vasilevskiy thinks is a hex.

“At the World Championship, I heard from a few NHLers that you don’t want to win the Presidents’ Trophy,” Vasilevskiy said. “No, seriously, because it won’t help you in the playoffs. The Presidents’ Trophy just kind of relaxes you. It was worth nothing to us.”