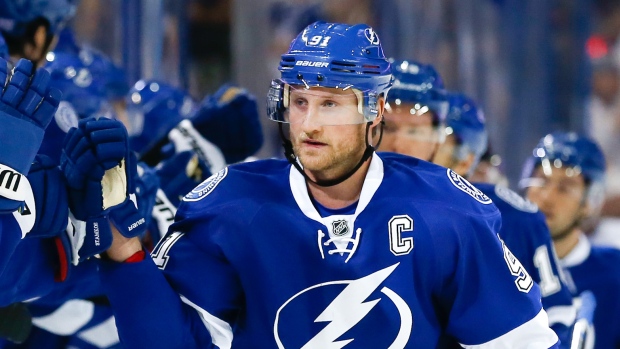 The spotlight has been shining on Stamkos and Nikita Kucherov – No. 1 and 2 in scoring – since they sprinted out of the gate as the fifth duo in the last 25 years to each net at least 20 points in the opening month of the season.

The Tampa Bay Lightning teammates’ dominance has continued. Kucherov leads the league in goals (15) and Stamkos paces the pack with as many assists (21) as the No. 3 scorer has points.

Kucherov, 24, has at least one goal and one assist in five of his last eight games. Stamkos, 27, has nine multi-point games already.

“I know he flies under the radar, but he’s a huge part of our line,” Stamkos told reporters in San Jose. “It’s fun. And we work hard as a line to get better. Vlady is a great player and he makes our line better.”

They’ve combined for 29 of Tampa Bay’s 64 goals, nearly as many as the Edmonton Oilers (32) or Carolina Hurricanes (35) have scored all season. Eighteen of those 29 are even-strength strikes, too.

The Lightning haven’t even hit the quarter pole yet, but Namestnikov is quietly stalking the lead. He sits 23rd in scoring entering Thursday night’s action, but he’s just four points back of Wheeler for the third spot.

It’s crazy to think it would be a possibility in a league that prides itself on parity. But with that line working so well – Stamkos and Kucherov have only played 6:57 of even-strength without Namestnikov this season – it’s not out of the question that Namestnikov could keep pace.

He adds speed to an already dangerous line with two true snipers, including Stamkos, who has reinvented himself as a playmaker as much as a scorer.

Tampa Bay’s skating has suffocated opponents. The Lightning (12-2-2) have a league-best 26 points for a reason; one of the trendy early season picks that has lived up to expectations.

“They were a man short and they looked like they had five more guys than us on the ice,” Sharks forward Logan Couture told reporters Wednesday. San Jose had won four straight.

Three other times in NHL history have three or more teammates have occupied the top of the scoring list.

Most recently, the 1995-96 Pittsburgh Penguins, narrowly missed out on the feat. Mario Lemieux finished first, followed by Jaromir Jagr, and Ron Francis was one point away from third place – but they also weren’t a line.

The 1954-55 Canadiens – with Bernie “Boom-Boom” Geoffrion, Richard and Jean Beliveau – finished 1-2-3, but they weren’t a line since Geoffrion and Richard were both right wingers.

Then again, maybe the Lightning don’t want Namestnikov to surge to No. 3 on the scoring list. Namestnikov is not only set to become a restricted free agent after this season, but none of those three teams who dominated the scoring list won the Stanley Cup that year.