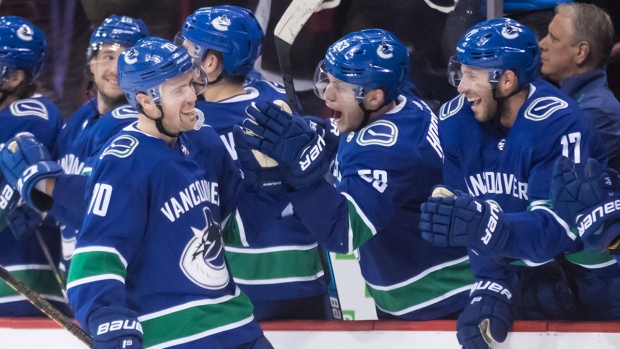 VANCOUVER — Tanner Pearson scored on the power play and had an assist as the Vancouver Canucks defeated the San Jose Sharks 4-1 Saturday night.

Loui Eriksson, J.T. Miller and rookie defenceman Quinn Hughes also scored for the Canucks (27-18-4) who won for the 11th time in 14 games and extended their home winning streak to eight games. The win also moved the Canucks into first place in the tight Pacific Division with 58 points, one more than Edmonton, Calgary, Vegas and Arizona.

Jake Virtanen and Adam Gaudette, playing in his 100th NHL game, both had two assists for Vancouver, who outshot the Sharks 38-17.

Barclay Goodrow scored for the Sharks (21-25-4) who lost their third consecutive game.

Pearson gave the Canucks a 2-0 lead at 5:01 of the third period when he deflected a Virtanen shot past Dell.

The Sharks finally showed some life when Goodrow scored off a scramble at 7:09. Hughes restored Vancouver’s two-goal lead just 37 seconds later when his shot from the blueline hit something and went into the net.

Eriksson’s goal came at 14:05 of the second. Pearson whiffed a shot that sent the puck trickling to the net. Eriksson lifted the stick of San Jose defenceman Erik Karlsson, then batted the puck behind Dell for his fifth goal of the season.

San Jose challenged, arguing Vancouver was offside. The goal was upheld on video review and San Jose was assessed a penalty, but the Canucks failed to score on the power play.

Vancouver peppered Dell with shots. The San Jose goaltender made a nice save off Pearson on the doorstep. He also got lucky when Elias Pettersson rifled a shot off the post and J.T. Miller deflected the puck just high.

NOTES: Canuck captain Bo Horvat announced on social media that he and his wife are expecting a baby. … Vancouver’s longest home-ice winning streak was 11 games between Feb. 3 and March 19, 2009. … The Sharks’ Joe Thornton played his 1,616th game to pass Larry Murphy for 10th place in NHL history. … San Jose forward Marcus Sorensen was a healthy scratch for the first time this season. … The teams played four minutes, 11 seconds of the first period before a whistle.

This report by The Canadian Press was first published Jan. 18, 2020.