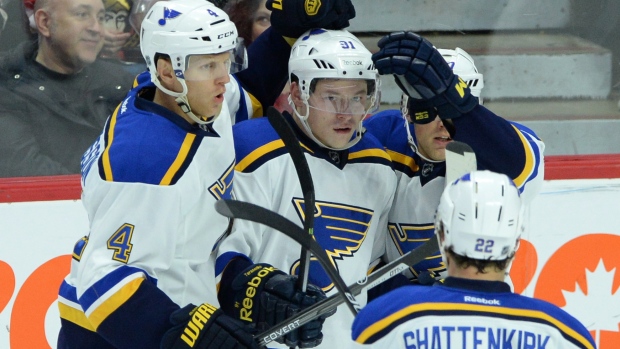 After signing a 23-year-old to the richest contract in franchise history, St. Louis Blues general manager Doug Armstrong described locking up Vladimir Tarasenko for the next eight years as a relatively straight-forward process.

“When you get down to a number,” Tarasenko’s agent, Mike Liut, said in a conference call, “it seems fairly simple at that point.”

Those words, in light of the many zeros on the paperwork, would seem to defy logic. With a few swoops of the pen, Tarasenko became the 16th highest-paid player in the NHL on Tuesday in terms of guaranteed salary. He earned a $900,000 base salary last season, which will rocket to $8 million in October.

Three or four summers ago, skipping over a “bridge contract” would’ve been an unheard of plan - a route reserved for only the game’s biggest stars, like Alex Ovechkin, Sidney Crosby or Evgeni Malkin. The common wisdom was to offer burgeoning young players a two- or three-year contract at a much smaller cap number, putting the onus on the player to prove worthy of a bigger future payday.

TRENDING UP: THE NEXT PAYDAY

But with teams across the league shifting toward younger cores, Tarasenko’s deal represents the next wave of NHL contracts. General managers are now placing a premium on making their young stars comfortable and happy. The Blues are betting Tarasenko’s cap hit will prove to be a bargain, not unlike the $33-million deal that ties up John Tavares in Brooklyn through 2018.

Tavares, 24, has already twice finished as a Hart Trophy finalist and has been on-pace to finish each of the last four seasons with 80-plus points, if not for a lockout-shortened campaign and a devastating injury in 2013-14. Yet, Tavares will carry just a $5.5 million cap hit for the next three seasons for the Islanders.

The ever-lingering fear of offer sheets for restricted free agents, plus a history of cap-friendly long-term deals like the one signed by Tavares, has teams thinking well into the next decade.

Unlike Saad or Hamilton, Armstrong was more in fear of losing Tarasenko to the KHL. Tarasenko admitted contact from other teams, but said his priority was always to remain with the Blues.

“The KHL was never brought up, but my Spidey senses told me that it was really there,” Armstrong told reporters. “I wanted to try and get this done as quick as possible and I was open to [Liut] about that.”

The Senators were one of the few teams to buck the summer trend, signing forwards Mark Stone and Mika Zibanejad to short-term deals. Stone, 22, finished with just nine fewer points than Tarasenko and signed a three-year, $10.5-million deal.

“What shocks me the most is I’ve never seen more ‘ready’ [young] players in my life,” Blues coach Ken Hitchcock said on TSN 1050 on Wednesday morning. “When kids came out of college or junior, kids weren’t ready physically, mentally, they weren’t ready technically [in the past].

“I’ve never seen players who are as in-tune with what’s needed on the ice, off the ice, conditioning-wise, play-wise, technically-wise. You sit down and talk to these kids and they know as much about systems and style of play [as anyone]. It’s really impressive.”

Tarasenko collected 37 goals and 36 assists to pace the Blues last season. He finished fifth in the league in goals - the youngest player in Blues history to net 30 since Brendan Shanahan in 1991-92. Fourteen of his markers were scored in the third period and he netted two overtime winners. He also had a playoff hat trick on April 22, finishing with six goals in six postseason games before the Blues were eliminated by the Wild.

“I think the number is misleading,” Hitchcock said. “Maybe he just stays at 37 to 40 goals or whatever. But 27 of the 37 goals were important goals last year. He saved us so many times last year; he scored so many goals at the end of games or in the third period. I think his greatest quality is his sense of timing. He seems to get the big play, or the right play, at the right time.”

Hitchcock said Tarasenko has as much potential to grow into an Ovechkin or Crosby role as anyone in the league - and predicted he’ll be on that level within the next 12 months. The Blues are banking on it.

“This contract, in reality, you take Crosby, Ovechkin, Malkin coming out of entry level, Vladi slides in right behind those guys,” Armstrong said. “We told him, ‘We believe you’re going to be a star player, we’re going to treat you like that. This wasn’t a high-low sort of volleying back and forth. There was no question with our first offer, we felt like he was a franchise player.”