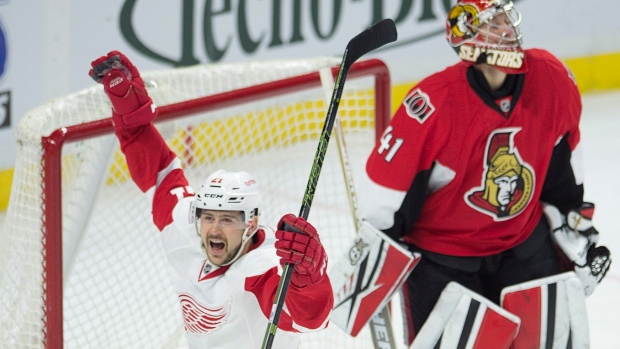 OTTAWA - Half of the games the Ottawa Senators have played this season have gone to overtime or shootout.

When asked why he thought that was, Senators coach Dave Cameron quipped "because they're tied."

That comment drew a laugh from the crowd, but Cameron really didn't find anything funny about his team's second straight loss and fourth in their past five games, citing lack of physical play as the main culprit for Monday's 4-3 loss to the Detroit Red Wings.

"Our main concern was a lack of physicality. Everything was skill based. Sometimes you have to bring the game into the trenches," Cameron said.

"You've got to block shots, you've got to win the battles along the wall and we're trying to do it with stick checking and finessing and that doesn't work in this league."

Tatar took a pass from Gustav Nyquist and went in alone from the Senators blue line before beating Craig Anderson at 2:04 of the extra period.

"They over-skated the puck and Nyquist made a great play to get me the puck at their blue line," Tatar said. "I pretty much decided to go blocker side and just shot it."

In a frantic third period that saw the Red Wings outshot Ottawa 15-10, it was the Senators who drew even on the scoreboard with a pair of goals, including one from Bobby Ryan with less than three minutes to play in regulation.

Ryan split the Wings defence before slipping a backhand into the net at 17:12.

Wideman had the other goal of the third period as he moved in from the point and beat Howard with a wrist shot from the top of the slot at 3:13.

"We were looking pretty good in the first and second periods and it should be easier than this," Tatar said. "We can't let that happen, letting teams come back and almost losing the two points."

Mike Hoffman also scored for the Senators (8-6-4), who have lost two straight and four of their past five. Anderson made 33 saves.

Ottawa allowed the first goal of the game for the ninth time in 10 home games this season.

Monday it was Larkin who opened the scoring at 9:12 of the first period when he swung around Senators defenceman Erik Karlsson and beat Anderson short side.

Slightly less than two minutes later Nyquist doubled that lead as he fired a one-timer past Anderson following a cross-ice pass from Justin Abdelkader.

"I'd love to change that but do I have any answers — not right now," Senators defenceman Marc Methot said of all the early deficits. "Coaches are scratching their heads as well, because preparation, from what I've seen, hasn't been the issue. Going into the games we've got the right game plans, but it's little inconsistencies that are killing us right now and teams tend to be capitalizing. A lot of it though is fixable so that's the one positive."

Ottawa got one back before the end of the first period as Hoffman scored on the power play with a slap shot from the point that beat Howard at 16:10.

The Red Wings increased their lead to 3-1 late in the second period as Sheahan got credit for a goal that was the result of a perfect storm.

Detroit had the Senators hemmed in their own zone and on the verge of being shorthanded as a delayed penalty was on the way. During a scramble in front of Anderson the puck was struck by a high Detroit stick, but when it landed in the crease Senators defenceman Patrick Wiercioch spun and knocked the puck into his own net.

Notes: Jared Cowan, Shane Prince and Andrew Hammond were the scratches for the Senators on Monday. Scratches for the Red Wings were Brendan Smith, Joakim Andersson and Tomas Jurco… Senators defenceman Erik Karlsson had his career high three-game goal scoring streak snapped Monday. It was the third time in his career he has scored in three consecutive games…Tomas Tatar played his 200th NHL game Monday, all with the Red Wings.