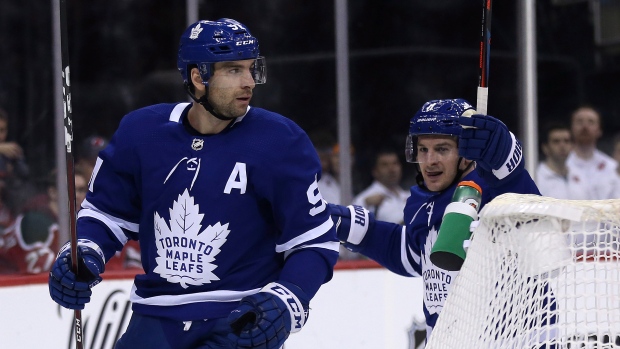 John Tavares faced the New York media Sunday for the first time since leaving the Islanders on July 1 and said he remains happy with his decision to sign with the Toronto Maple Leafs.

"I have absolutely no regrets," Tavares said after Toronto’s 4-1 loss to the New York Rangers. "I'm in a great spot. It's been a tremendous opportunity and we're just beginning.

"When I made the decision it felt right to me and it was the best thing for me and my career."

The 28-year-old will make his return to Long Island on Feb. 28 at Nassau Veterans Memorial Coliseum.

"Obviously it will be nice to see a lot of familiar faces and be back in place that meant a lot – still does mean a lot to me and my career," Tavares said. "As best I can I'll try to treat it like any other game. Obviously it probably won't be like that, but just be the best prepared I can play and whatever the reception is, I'll just focus on playing and trying to play well."

Tavares, who signed a seven-year, $77 million contract with the Maple Leafs, is on pace to top his career-highs in goals and points this season. He has 33 goals and 60 points through 55 games while averaging 19:05 of ice time.

The Islanders, meanwhile, have five-point lead for first place in the Metropolitan Division and have one more point than the Maple Leafs this season with both teams having played 55 games.