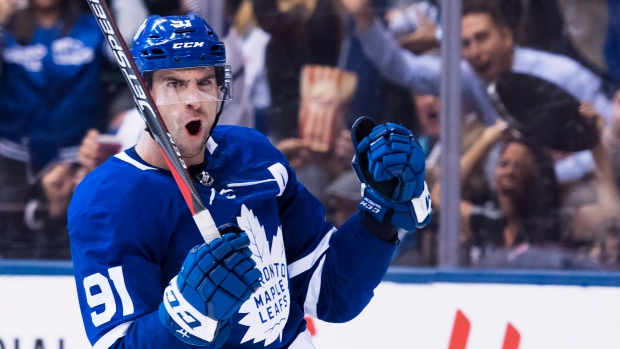 TSN Toronto reporter Mark Masters checks in daily with news and notes on the Maple Leafs, who held a morning skate and practice (non-playing group) on Tuesday at Mile One Centre in St. John’s, NL.

As he starts his 11th NHL season, it was suggested to John Tavares that some veterans see the exhibition schedule as a bit of a drag. Wouldn't it be nice to fast forward to opening night?

But Tavares doesn't see it that way at all.

"I mean, these games are crucial to get ready to play," said Tavares, who turns 29 later this week. "You see guys that don't play in many exhibition games or miss time in camp; it takes time to get that rhythm back. You haven't played in four, five months. It's a long time so it's a way to get back into that routine, that feeling. All those things, as best as you can mimic them in training camp and practice or preparing in the off-season, there's nothing like playing in a real game and what that type of environment is, so they're crucial."

Toronto's top players are scheduled to suit up in four of the eight preseason games, two this week and two next week. The two next week against Montreal and Detroit will feature the NHL lineup.

"You're playing in the greatest league in the world, at this level you never take any [games] for granted, whether they matter or they don't," Tavares said.

After a strong first season in Toronto while playing with Mitch Marner, Tavares isn't about to rest on his laurels.

"With the chemistry we were able to develop and the success we had, it just leaves you hungry for more," said Tavares. "It doesn't change the feeling or make you feel relaxed. I think it just continues to fuel the drive that we want to continue to get better."

Tickets for tonight's tilt on The Rock sold out in mere minutes and the anticipation has been building in the Newfoundland and Labrador capital since the Leafs landed here Thursday night.

"It's been amazing just the buzz around town," said Tavares, who was sporting a Danny Cleary Hockey School hat during his media session, "us going out to eat and even just walking around, the amount of people that recognize us and are so passionate about the team ... it's not every day we come out here so it's a big deal [and] looking forward to it. It should be a great atmosphere and obviously want to go out and play well and put on a good game."

You can understand why Tavares is placing so much emphasis on the exhibition season. He and Marner have a new linemate to build chemistry with in Kasperi Kapanen. Tavares will also have a new role on the power play as he shifts to the bumper/middle spot vacated by Nazem Kadri.

"Obviously, some guys who were in that role aren't here this year, so we talked about me being in there and thought it was a good spot to try out and felt I could be good in that role," Tavares explained. "I try to be as versatile as I can be and play wherever the team needs me and try to be effective there and productive. I played quite a bit there my last year in New York so I have some familiarity in that spot."

Tavares scored 10 of his 47 goals on the power play last season while playing primarily as the net-front presence and a bit on the flank.

Toronto's top unit at the morning skate featured Tavares, Marner on the left flank, Tyson Barrie at the point, Jeremy Bracco on the right flank with Egor Korshkov in front.

"It's a pretty good unit," Bracco said with a big smile. "There's a lot of money on that unit. When those guys talk you be quiet and listen, for sure."

While training camp is "crucial" for Tavares, it's arguably even more important for someone like Bracco, who is facing an uphill battle to snag a job despite racking up 79 points in 75 games with the Marlies last season and finishing second in AHL scoring.

"To be honest, I think he's probably one of the better passers on our team," said Kapanen, who was on a line with Bracco the first two days of camp before Tavares and Marner arrived. "He just sees the ice really well. His skating isn't [pause, smile] the best we've ever seen, but his vision is something else, for sure. Just looking at all the plays he makes you kind of envy him."

Bracco worked hard this summer with skating consultant Barb Underhill to try and improve his stride.

"She tries to get me to skate forward instead of sideways and we're still working on that," the 22-year-old said.

While Bracco is on the outside looking in right now, Trevor Moore is trying to maintain his spot. The winger made his NHL debut with the Leafs last year, playing 25 games in the regular season and not looking out of place while suiting up in all seven playoff games against Boston.

Much like last year with Andreas Johnsson and Travis Dermott, Babcock sent out a warning that nothing will be guaranteed for Moore.

"He's like the other guys. There's eight games right here, it's competitive, you gotta show," the coach said. "I think initially you get in and you think you're in for life. The great thing about the National Hockey League is you're in for that year and you got to keep going. Now, there are a few guys who are just that good, but the rest of us are on a tryout."

Moore worked on getting a bit faster during the summer and has no intention of taking a backseat in tonight's game.

Moore will be skating on a line with Jason Spezza, who is starting his 17th NHL season.

"You're pretty fortunate to come in here and play on a team lower in the lineup and get to play with a guy like that," Moore said. "I mean, his knowledge of the game and the way he approaches it is, I got to think, second to none."

Moore is still getting used to playing alongside the 36-year-old centre, but even at the morning skate found a reason to be impressed noting Spezza threaded the needle to fellow linemate Pierre Engvall for a backdoor tap-in on a three-on-two rush.

However, Babcock has made it clear that Spezza's veteran status doesn't mean he's immune from the same training camp pressure guys like Moore face.

"There's a role here for him, but he’s got to be able to do it," Babcock said in response to a question about Spezza being a good role model for younger players. "And, so, we'll see over exhibition whether he likes it and whether he wants to do it. So we're just in the process of feeling him out and he's feeling us out right now so it's probably a different camp that way for him. But, he loves hockey."

Spezza, who averaged 13:16 of ice time in 76 games with Dallas last season, insists he's ready to fully embrace whatever the Leafs ask of him. He's already made the transition to a bottom-six mindset in recent years.

"I've produced my whole life and you have a high expectation of where you're at and where you should be in the lineup so, yeah, the first maybe year or a little bit of transition was tougher than others, but now I've played that role for a couple years so I feel comfortable doing it and I know what it has to look like and what you have to do," he said.

"You become a little more of a specialist. You play on special teams, you plan on taking faceoffs and when guys go down with injuries you have to move up and down the lineup. You have new linemates all the time, instead of when you're the top guys you kind of have the set lines so there's some different challenges. Basically, it comes down to, do you want to keep playing or do you want to hold on to the old days and I want to keep playing."

Note: Spezza worked on the PK this morning, but has also practised with the PP during camp

This group will travel to Ottawa for Wednesday's game