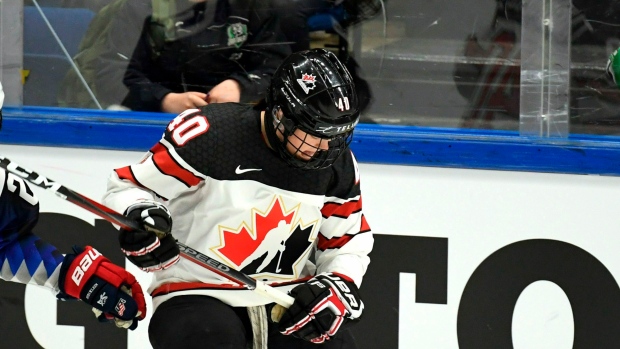 When she made her debut with Canada’s women’s hockey team in 2014, Blayre Turnbull became one of the first two women from Nova Scotia to play for the national team, along with Jill Saulnier.

Turnbull grew up in the small town of Stellarton, N.S., which has a population of under 5,000. She played for many years on boys’ teams with her younger brother, Brent, and was coached by her dad, Ron. She also spent time with the Hockey Nova Scotia High Performance Program.

Turnbull also captained Team Atlantic at the 2009 National Women’s Under-18 Championship and was named captain again for Nova Scotia’s squad at the 2011 Canada Winter Games, where she finished with seven points in seven games.

Before she left for St. Mary’s, Turnbull was forced to deal with personal tragedy. Her mother, Margie, died of cancer after a 17-month battle.

“Being a 15-year-old girl and losing your mother, you jump straight to adulthood,” she told the Wisconsin Journal. “Through her fight is when I really learned how to be strong and how to persevere and how to stay determined and fight even the little battles.”

Turnbull joined Wisconsin for the 2011-12 season, where she was named the team’s rookie of the year and helped the Badgers reach the Frozen Four championship game. In her junior year, she set a school record with five shorthanded goals that season and Wisconsin once again advanced to the Frozen Four.

Some of her greatest success came in her senior year in 2014-15. Serving as the team’s captain, she led the Badgers to the WCHA Championship, and was also named to the WCHA First All-Star team.

Turnbull also made her debut with Canada’s senior team that season. She had featured for the Canadian under-18 team in 2010 but was ultimately cut from the program and never played at an IIHF Under-18 Women’s World Championship. Turnbull also spent time with Canada’s development team before being called up to the senior team for the 2014 Four Nations Cup, where the squad won gold.

She made her women’s worlds debut at the 2016 IIHF Women’s World Championship, where she scored the game-winner in Canada’s 5-3 semifinal victory against Finland. Turnbull won silver with the team at both the 2016 and 2017 world championships.

Turnbull was selected 19th overall by the Calgary Inferno in the 2015 CWHL Draft. In her rookie season, she finished with seven goals and 16 points and won the Clarkson Cup with Calgary. Three years later, she raised the Cup again with the Inferno and was named an all-star after finishing with 12 goals and 21 points.

In 2018, Turnbull was able to realize a childhood dream when she was named to Canada’s Olympic roster. Like many of her teammates, Turnbull’s Olympic hopes were sparked after watching Canada win gold at the Salt Lake City Games in 2002.

At the PyeongChang Games, Turnbull recorded three assists, including one in the gold-medal game, as Canada earned silver after falling in a shootout to the Americans.

She had her best offensive performance for Canada at the 2019 women’s worlds, scoring four times in six games, including a two-goal performance in a quarter-final win against Germany. But Turnbull suffered a tournament-ending injury in the semifinal after she was pushed head-first into the boards in the match against Finland.

Then-head coach Perry Pearn said Canada had lost “the conscience of the team.”

Turnbull was part of the 10-player Canadian All-Star team that featured in the Elite Women’s 3-on-3 game at the 2020 NHL Skills Competition.

When the CWHL ceased operations after the 2018-19 season, Turnbull joined many of her Canadian teammates in forming the PWHPA, which was created with the goal of establishing a viable pro women’s hockey league in North America.

Following the mass shooting tragedy in Halifax in April 2020 that left 22 people dead, Turnbull started a “Hope For Home Helmet Sticker” campaign, which she used to raise money for children who lost a parent in the massacre. Turnbull raised $20,000 in the first week, which was given to the families to pay for the children’s extracurricular activities.

Turnbull told the Canadian Press that losing her mother at a young age was a main impetus for launching the fundraising campaign.

"A lot of what helped me stay on the right course and not turn down a dark road and start making poor choices was the fact that I was still so involved with extracurricular activities like hockey, soccer, rugby," she said.