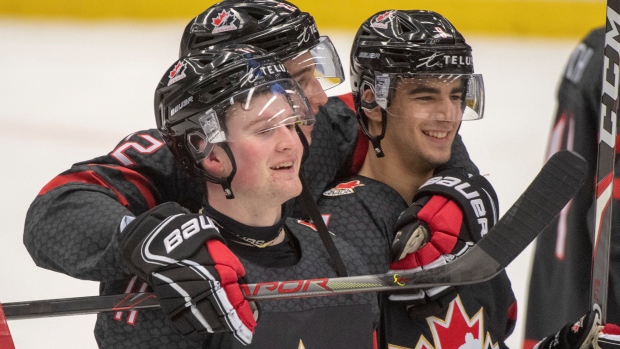 OSTRAVA, Czech Republic — Joe Veleno can’t help but click on the highlights of Team Canada’s stunning quarter-final loss to Finland last year. It’s a painful kind of clickbait when it pops up on social media.

“Re-watching that video kind of triggers me a little bit,” Veleno said. “Especially with [Noah] Dobson breaking his stick on the empty net.”

One year on, it’s still shocking. Not the result – there is no shame in losing to a hockey power like Finland. It’s the way it happened.

Like how Canada was 46.4 seconds away from the semifinal when an Eeli Tolvanen pass shimmied up Aleksi Heponiemi’s shin pad and into the net.

Or how about after captain Maxime Comtois missed his chance to play hero with a penalty shot in overtime and Dobson’s stick exploded on a one-timer, leading to an odd-man break that saw Toni Utunen’s perfectly placed shot deliver Canada’s worst World Juniors finish on home soil?

It’s still difficult to process the confluence of two tough bounces – the shin pad and the shattered stick – in a span of minutes to break Canada’s hearts.

“I think through a lot of the bad luck that happened for us,” Veleno said. “The game, the outcome, it could’ve [gone] a lot of different ways. Being out there wasn’t a good moment for us. I think we were just really disappointed in the locker room.”

Veleno said it’s something you never really get over.

“If we won that game we could’ve maybe won the tournament,” Veleno said Friday. “We get a chance to play for a gold medal. But that’s done with. And for the guys coming back, we’ve got a whole new shot at redeeming ourselves.”

“We all remember all of it,” Hayton said. “But that’s last year. We all have a really bitter taste in our mouth about that, but it’s a fresh year and a fresh group and we’re really excited to get out there.”

Standing in the way of Team Canada’s date in the gold-medal game is Utunen and a Finnish team eager to break their hearts again.

“I’m excited for tomorrow,” said Utunen, the overtime sniper. “It was a huge goal and I hope to see something similar tomorrow.”

Utunen, a Vancouver Canucks prospect, is one of three Finland returnees from last year. He has been a certified Canada killer, scoring three of his last four goals against Canada, including two at the Summer Showcase.

Finland has had Canada’s number of late. They’ve knocked out Canada in three straight medal-round games, taking home gold in three of the last six tournaments after not winning one at all in the first 37 years of the World Junior Championship.

This year, Team Finland (3-1-1) ended Team USA’s medal hopes with a clinical, 1-0 shutout win in the quarter-finals on Thursday.

It was the perfect reminder – against an American team Canada beat in run-and-gun fashion – that this will be a different style of game.

“We gave them nothing,” Winnipeg Jets prospect Ville Heinola said.

That is how Finland wants to play. They are smart, calculated and talented. They don’t win by clogging the neutral zone, but they are relentless in taking away time and space, and they are disciplined. They have taken the second fewest penalties at the World Juniors, which is part of their plan to limit Canada’s tournament-best (11-for-25) power play.

It will be a chess match. Finland needs only one opening. On Thursday, it came halfway through the third period. Last year, it came with 46.4 seconds remaining in regulation.

Utunen has the puck from his overtime winner on display in his father’s house for proof.

“Lucky for us, the guys returning get another shot at it,” Veleno said.

Hayton said the five returnees, plus others from the 2000 birth year class in Team Canada’s program of excellence, have kept in touch over the months since that loss.

“We’re in constant communication, that’s just how we are,” Hayton said. “We’re a tight group.”

It’s a different year, two mostly different teams, but Team Canada has wanted to get revenge for Dobson, DiPietro, Comtois and all of their other teammates that won’t be playing.

“We look at ourselves and say, ‘You know, this would be a really good group to do this,’” Veleno said. “I think we believe in ourselves and in every one of us. We’ve got a special group here. I think we can win this … Our leadership group feels real confident with the team we have.”