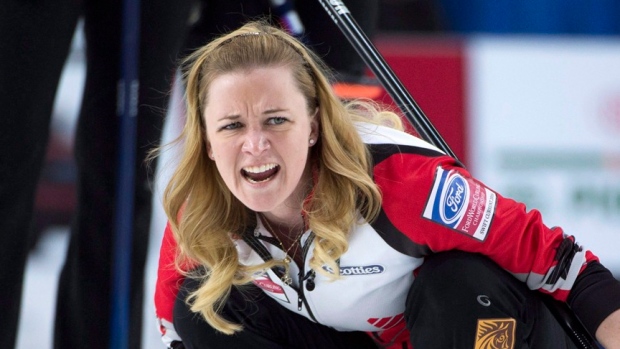 Chalk up Chelsea Carey's debut at the world women's curling championship as a learning experience. She's hoping her return to the event will lead to a podium appearance.

The Calgary skip, who settled for a fourth-place showing at the 2016 playdowns, will be joined by Sarah Wilkes, Dana Ferguson and Rachel Brown at the March 16-24 competition in Silkeborg, Denmark.

"I don't know that I'm doing anything different but I'm more prepared for what's going to happen than I could have possibly been the first time," Carey said Friday. "I think that's a good thing."

The Alberta team is coming off an extra-end victory over Ontario's Rachel Homan in last month's Scotties Tournament of Hearts final in Sydney, N.S.

Carey stole five points over the last six ends for an 8-6 win. It was the first national title for Wilkes, Ferguson and Brown.

"Lots of really good teams there," Wilkes said. "We've played against a few of them a couple of times this year and we know that it'll be good games. I feel confident in our ability.

"We've had a couple of good months here and I think we're all feeling pretty confident going into the event. We're all excited to get going in Denmark."

The Canadians have added an experienced alternate for the trip as longtime Team Jennifer Jones second Jill Officer will handle the fifth role.

"As much as the girls have played a lot of the teams, there are teams that they're probably not familiar with," Officer said on a conference call. "Those are the teams that I think you actually have to watch out for. So I can talk to them about that and help them prepare for that as well."

Officer helped Jones run the table to give Canada the gold at last year's world championship in North Bay, Ont. She stepped back from competitive curling this season but handled fifth duties on occasion for Jones and subbed in for a few ends at the Scotties.

Alternates have to be ready to replace a teammate in the event of injury or illness. They also often handle duties like rock matching, scouting and preparations.

"I'm hoping to take a lot of (distractions) off their plate and manage a lot of the off-ice stuff, be able to give them pieces of advice when they need it or when they ask for it," Officer said of her role. "Just to allow them to focus on going out there and playing to their abilities."

Carey teamed with Amy Nixon, Jocelyn Peterman and Laine Peters at the 2016 playdowns in Swift Current, Sask. They lost twice on the final weekend to Russia's Anna Sidorova, including a 9-8 decision in the bronze-medal game.

Carey's new lineup is ranked sixth in the world this season.

"We've talked more about what to expect in between the Scotties and the worlds," Carey said. "I think that was a tough thing for me last time. You expect to be able to celebrate the fact that you just accomplished a lifelong dream and you don't really have any time to. There's so much to do and it's very, very busy between the two."

Rounding out the Canadian contingent are team coach Dan Carey and national women's coach Elaine Dagg-Jackson. Canada will open against South Korea in the evening draw on March 16.

The winner of the ongoing Tim Hortons Brier will represent Canada at the March 30-April 7 world men's curling championship in Lethbridge, Alta.