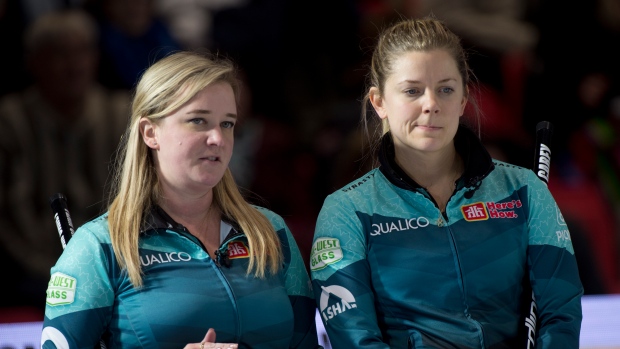 Three days after Sarah Wilkes decided to move on, Team Chelsea Carey have now officially disbanded with the departures of lead Rachel Brown and second Dana Ferguson on Monday.

“After two years together, our run has come to an end. Dana and Rachel are moving forward with different plans for next season...

“We accomplished some amazing things in such a short time together. And I will carry those memories with me forever," Carey said in a statement. “While I don’t know what next season holds yet, I do know my competitive fire burns as hot and bright as it ever has. And I’m excited about the new, fresh possibilities that await.”

Brown and Ferguson, both 33, have played together for the past eight seasons, making four appearances at the Canadian championship, including in 2014 and 2015 when they lost in the final both times as members of Val Sweeting's rink.

The foursome of Carey, Wilkes, Ferguson and Brown played together for two years, winning the Scotties Tournament of Hearts together in 2019 as Team Alberta, beating Ontario's Team Rachel Homan in a dramatic final from Sydney, N.S. They finished outside of the playoffs at the world women’s curling championships in Denmark a few weeks later.

They returned to this year’s Scotties in Moose Jaw, Sask., as Team Canada and finished with a 5-6 record, outside of the playoffs.

Wilkes released a statement of announcing she was leaving the team last week.

“Thank you to Chelsea, Dana and Rachel for the amazing time we’ve spent together and the memories created. It was an honour taking to the ice with you every time,” Wilkes said. “This is not an easy decision to step away from the team. I wish Team Carey all the best and good luck moving forward.”

Wilkes currently lives in Edmonton and works as a student advisor at the University of Alberta. Since she was born in Toronto, Wilkes has birthright status in Ontario, meaning she can play for any team based in that province even if she continues to live out West.