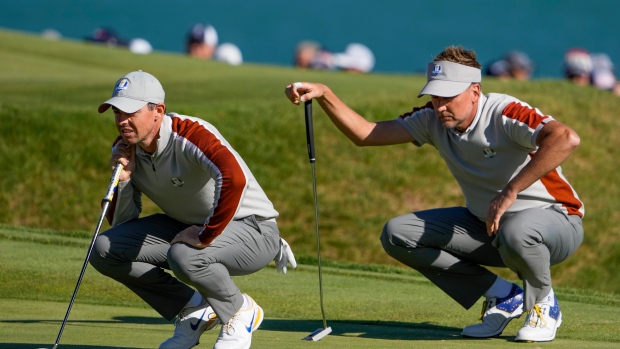 He can’t clone Jon Rahm. He can’t make any last-minute substitutions. He can’t sneak up and cut the laces on the Americans’ golf shoes or super-glue the head covers to their drivers.

All European captain Padraig Harrington can do at this point is post the lineup card, recite a few lines from Winston Churchill's "We Shall Fight on the Beaches” speech, wave his guys on their way Sunday morning and then pray. A lot.

Harrington knocked that first task off his to-do list late Saturday, predictably front-loading his lineup in a desperate bid to gain momentum and then somehow sustain it through the dozen singles matches. The Europeans trail captain Steve Stricker’s young and hungry U.S. squad 11-5, and no team has ever come back from a deficit of more than four points.

Worse, after losing seven of the last nine cups, the Americans are out for revenge.

“They have run the score up on us before,” said Tony Finau. “And if we have the opportunity, we are going to run it up on them tomorrow.”

Avoiding embarrassment is a reasonable goal. Englishman Ian Poulter, hardly exaggerating Europe's chances for a comeback, put it this way: “We need a couple of miracles.”

What the Europeans really need is a dozen players like Rahm, the steely eyed Spaniard who currently sits atop the world rankings. He has won all three of his team matches alongside countryman Sergio Garcia and tied the fourth, practically carrying England’s Tyrrell Hatton on his back.

“The team is playing good,” said Rahm, being more gracious than candid. Half of Europe’s squad has failed to contribute so much as a half-point. “Just putts not dropping in and a couple things here and there that just could happen that haven’t happened. I’d like to believe that things even out.

“Golf is a very complicated and ironic and sarcastic game sometimes,” Rahm added a moment later, "and teams can be capable of some great things, like the U.S. has done so far the last two days. It could be our chance.”

Momentum is everything on the final day of the Ryder Cup. Anyone who has watched the scoreboard change colors like the temperature gauge in an overheating car knows how quickly a cushion can become a hot seat. Think of how fast the Europeans, holding a 10-6 lead, slid down the drain just ahead of American Justin Leonard’s putt at Brookline in 1999. Or the way the Europeans similarly turned the tables in 2012, erasing that same deficit for an improbable win at Medinah.

“I think we learned a lot of lessons from 2012,” said Stricker, who played on that team and lost his singles match to Martin Kaymer. "Probably the thing I can say is that we didn’t do a good job then putting our lineup out on Sunday. ... That was definitely one of the things that we were talking about up there tonight.

With eight players ranked among the top 10 in the world and only one outside the top 20 — Scottie Scheffler, at No. 21 — Stricker's job was picking through an embarrassment of riches.

Xander Schauffle, who went 3-0, leads off against also-winless Rory McIlroy. World No. 2-ranked Dustin Johnson, the squad's oldest player and the only golfer on either side to go 4-0 through the team matches, will get to sleep in and plays in the sixth match against winless Paul Casey. Daniel Berger, one of six American rookies, wound up in the 12th spot against Matt Fitzpatrick, yet another European without a point.

Except for McIlroy, Harrington lined up all of his winless players in slots 6-12. Rahm plays the third match against Scottie Scheffler, and Garcia goes off fourth against long-hitting Bryson DeChambeau.

“These things can be done,” said Harrington, who played in the 1999 match at Brookline. “It is more of an individual game tomorrow and our job is getting them to focus on winning their point. That’s the biggest thing they can do to help the team.”