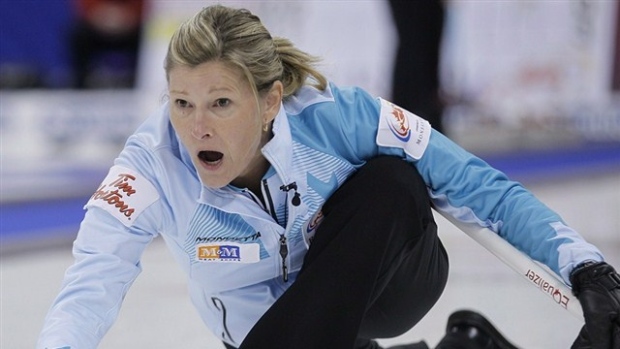 Team Tracy Fleury, a foursome that appears close to a breakthrough on the Canadian women's curling scene, has brought in longtime skip Sherry Middaugh as coach to help get them to the top.

Middaugh will try to guide the rink back to the Scotties Tournament of Hearts this season and aim to set them up for success at the Olympic Trials in just over a year.

"I'm very excited about the opportunity because I think you see what they have in their dynamics," Middaugh said. "That's a huge part of the game, especially in the ladies' (competition), is that in those stressful situations they come together instead of kind of fighting it.

"So I think the opportunities and the (potential) successes for them are endless."

Middaugh's addition comes as a disjointed curling season gets underway on an regional basis due to the COVID-19 pandemic.

Fleury joined Winnipeg-area teammates Selena Njegovan, Liz Fyfe and Kristin MacCuish two years ago after they parted ways with Kerri Einarson, who skipped them to a silver medal at the 2018 Scotties.

The Sudbury, Ont., resident was a smooth fit, guiding the team to a Masters win on the Grand Slam circuit last year and a top-three position in the national and world rankings.

Middaugh, who has previously coached at the U18 and U21 levels, was a four-time bronze medallist at the Scotties and reached the Olympic Trials final in 2013 before falling to Jennifer Jones.

Fleury said she's hoping Middaugh's wealth of experience will prove invaluable in their pursuit of that elusive Scotties crown and push toward the Trials.

"That'll be a huge asset to our team for sure," she said from Sudbury. "She's played in a lot of high-profile events. A lot of big games. So I think we can definitely draw on that."

Middaugh said she has "always been enamoured" with the team's personality and skillset.

"Tracy exudes that calm confidence," she said from Victoria Harbour, Ont. "I love their style of play, which is huge because when you bring on a coach or a fifth player, you need to have that similar viewpoint.

"I see a lot of me in Tracy, the way she calls the game and I think it's absolutely fantastic."

Fleury has worn four different sets of colours over five career appearances at the Scotties.

She represented Ontario in her nationals debut in 2012 and has also skipped Northern Ontario and Manitoba teams. Fleury was a wild-card entry last season but lost the play-in game to Jones.

Fleury, a 2019 Canada Cup finalist, has made two career appearances at the pre-Trials but has yet to qualify for the main Trials. The Tim Hortons Roar of the Rings is set to begin in late November 2021.

"Our team was talking about who we wanted to bring on board and Sherry's name came up and we thought she would be an excellent fit for our team," Fleury said. "So I reached out to her and it just so happened she was considering getting into coaching.

"So the timing was right and the fit seems great."

It has been a few years since Middaugh played on the elite women's scene but she has kept busy with senior competitions. She said Fleury first approached her about a year ago but the timing didn't work out.

"When she called again, I just thought this is fantastic, right leading up to the Olympic year," Middaugh said. "I've always been impressed with Tracy and the girls.

"I know that they're a fairly new team but you can just tell from their experiences and the success they've already had that they're going somewhere."

Fleury, who had a baby girl last July, said the ice at her local club is expected to go in early next month. She has had regular video calls with her teammates, who have been practising in Manitoba.

They are aiming to compete at the Nov. 27-30 Dekalb Superspiel in Morris, Man.

"I think we're going to have to just be adaptable this year," Fleury said. "Things kind of change day to day. But as of right now, we are planning to play about four or five events."

"When you're working with a high-level team that's already had success, you don't want to get in their way," Sherry Middaugh said. "So for me it's going to be observing and asking a lot of questions of them of what they want for me, because they have had success.

"We don't have to reinvent the wheel, we just have to figure out what little piece they're missing to have them go that one step farther and build towards the Olympic Trials."

This report by The Canadian Press was first published Oct. 20, 2020.