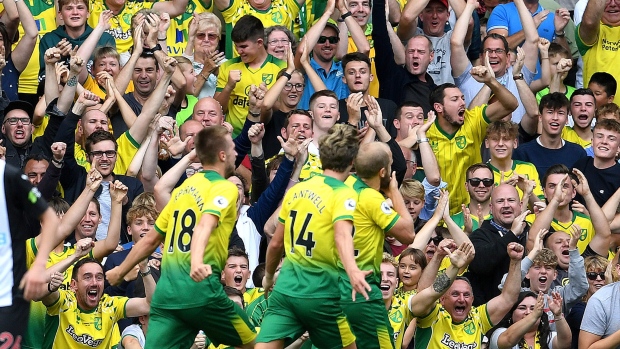 NORWICH, England — Teemu Pukki's hat trick earned Norwich its first points back in the English Premier League as the promoted team eased past Newcastle in a 3-1 win on Saturday.

The Finnish striker has a league-high four goals for the season.

The Canaries started brightly and were rewarded for their intensity when Pukki fired his side into the lead with a powerful volley from inside the box and past goalkeeper Martin Dubravka.

Pukki, the League Championship top scorer last season with 29 goals in 43 matches, added a second in the 63rd minute when he turned and struck the ball into the bottom corner. And just 12 minutes later, he completed his hat trick, twisting past the Newcastle defence before slotting home.

Jonjo Shelvey pulled one back for the visitors in injury time.

Newcastle has lost both of its opening games in the league under new manager Steve Bruce. Norwich started with a 4-1 loss at Liverpool.