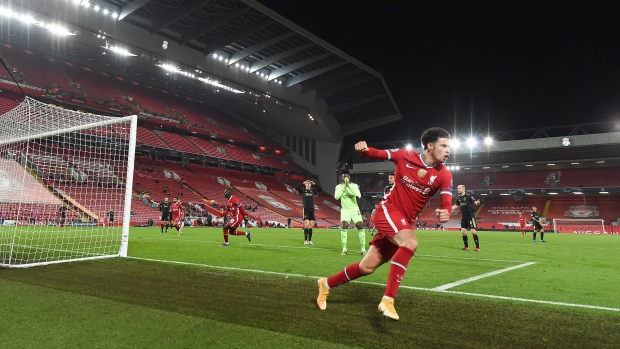 LIVERPOOL, England — Jürgen Klopp could count on his kids to see injury-depleted Liverpool through in the Champions League.

A first European goal from Curtis Jones secured a 1-0 victory over Ajax on Tuesday, clinching a place in the knockout stage with a game to spare as Group D winners.

The midfielder scored after connecting with a cross from fellow 19-year-old academy graduate Neco Williams, taking advantage of stranded goalkeeper André Onana and clipping the ball into the net with the outside of his right boot in the 58th minute.

“The kids played exceptional," Klopp said after weeks of gripes about the game schedule being to blame for a succession of injuries. “We defended like devils. It is not that we played the best, best football.

"We are top of the group after match day five and we’ve never done that before. Unbelievably good.”

It was a night to forget for Onana but one to remember in goal for Caoimhin Kelleher for the six-time European champions. Handed his Liverpool debut after Alisson Becker joined the injury list, the 22-year-old Kelleher's performance belied his experience.

A header powered in by Klaas-Jan Huntelaar was pushed over by the Irishman. He also tipped over a rising shot from Noussair Mazraoui in the first half and pushed away another effort from the Ajax defender after the break.

“We (the young players) are not here just to take part," Kelleher said. "We want to push every day, and try and play as many games as we can. You can see that now, we’re making a difference and improving the team.”

No wonder his commanding performance was being applauded on the touchline. And when the final whistle blew, Klopp went over to embrace Kelleher at the last Anfield game before fans are allowed back in.

“It was easy to decide for Caoimh because he deserves it but difficult to decide against Adrian because he has done well for us," Klopp said of the more experienced 33-year-old Spaniard. "We needed the package of Caoimh and he is a top talent, really good shot-stopper and top footballer.

“We needed that for the pressing of Ajaxe. It was really good. In the end it is about keeping the ball out the net and he did that twice and he did that in an exceptional manner. He will either sleep really well tonight or nor at all.”

The city of Liverpool will awake from a month-long slumber on Wednesday.

When England's national lockdown ends on Wednesday, Liverpool will enter tier two of coronavirus restrictions, ensuring up to 2,000 fans will be in for Sunday's Premier League game against Wolverhampton.

The last top-level game to be played in England with a crowd was when Liverpool hosted Atlético Madrid in the round of 16 on March 11, the day COVID-19 was declared a pandemic.

While Liverpool is sure of playing again in the last-16, Ajax has to beat Atalanta in the Group D finale to do so. The Italian side, which beat Liverpool last week, moved one point ahead of Ajax into second place by drawing 1-1 with FC Midtjylland.

With the top spot secured for Liverpool, there is no need to rush players back for the game at Midtjylland in Denmark next Wednesday.

Alisson has been ruled out for up to two weeks with a hamstring injury sustained in the 1-1 draw at Brighton in the Premier League on Saturday.

Almost the entire first-choice defence is already sidelined, with centre backs Virgil van Dijk and Joe Gomez out with long-term injuries and right back Trent Alexander-Arnold also sidelined. James Milner, who can act as cover for both full backs, also got injured at Brighton.

Concerningly for Klopp, defender Andrew Robertson hurt his ankle and captain Jordan Henderson had a back issue against Ajax.

“Both played through so I would say we have now two days more than we had last week so I think OK," Klopp said. “Things like this show up the next day a little different but in the moment I am positive about it. That is a problem for the next few days but not tonight.”