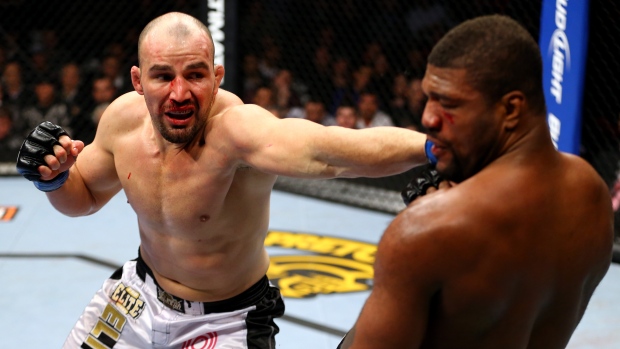 The former No. 1 contender was forced out of the main event at UFC Fight Night 61 on Feb. 22 due to a knee injury is hoping to return sometime in April and says he is still interested in a bout with the former light heavyweight champion then.

"April would be perfect. I like this fight. I think it would be a great fight for us and for the fans," Teixeira told MMAFighting.com. "Rashad is a wrestler, but not a wrestler like those who just hugs you and do nothing. He comes to fight. He doesn't to a boring fight, so I would like to fight him when I return."

Teixeira (22-4) is looking to return to form after two straight unanimous decision losses. He was defeated by Jon Jones in a light heavyweight title bout at UFC 172 last April and then by Phil Davis at UFC 179 in October. Before that he had won 20 straight fights dating back to 2006.

And while he says he can still stay in shape, preparing for a fight proved to be too risky.

"I'm training, but my knee isn't 100 per cent," he said. "I feel a lot of pain when I try to train jiu-jitsu and wrestling. I can do boxing or kickboxing, but I can't grapple or wrestle. My knee is still weak, so the doctor said
I might get another serious injury if I kept training for the fight."

Evans (19-3-1) has won consecutive bouts over Chael Sonnen and Dan Henderson but has not fought since November 2013 due to a devastating torn ACL suffered last February.