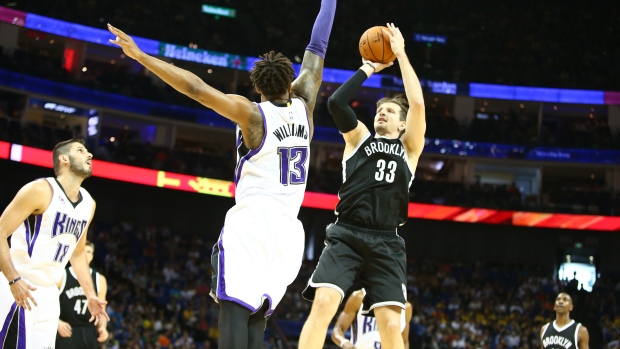 SHANGHAI - Mirza Teletovic sank a 3-pointer with less than a minute remaining to lift the Brooklyn Nets to a 97-95 preseason win over the Sacramento Kings on Sunday in the first of two NBA exhibition games to be played in China this year.

The Kings had a chance to tie the score with 20 seconds remaining, but Sergey Karasev blocked a jumper by Ben McLemore beneath the rim as time expired.

Lopez is still working to get back to his best after undergoing foot surgery and spending most of last season on the sidelines.

"I think Brook is getting himself in shape," said assistant coach Paul Westphal, who replaced head coach Lionel Hollins for the game after Hollins became ill. "He's far ahead of where we were afraid of where he was going to be. He's getting his timing. I think his foot is holding up really well."

The Kings were led by Ramon Sessions off the bench with 18 points and Darren Collison with 15.

Sacramento opened up a 95-91 lead on a jumper by rookie Nik Stauskas with 2:23 left in the game, but Marquis Teague sank three of four free throws down the stretch before Teletovic sealed the win with his 3-pointer off a pass from Jack.

"We played much better defence in the second half," Kings coach Michael Malone said. "But missed a lot of free throws. You go 22 of 36 from the foul line in a close game, that's going to make it very hard to win."

The game marked the 10th anniversary of the NBA's first preseason exhibitions in China, played by the Kings and Yao Ming's Houston Rockets in Shanghai and Beijing in 2004.

Yao was on hand to celebrate the anniversary, entering the arena midway through the first quarter to a huge round of applause. He was joined by a handful of other former NBA stars, including Shaquille O'Neal — who grabbed the microphone late in the game and bellowed "Ni hao" ("Hello") over and over to the fans — as well as former Kings players Vlade Divac, Mitch Richmond and Peja Stojakovic.

The Kings and Nets play again in Beijing on Wednesday.

A lot has changed since the first NBA game in Shanghai in 2004, which was played at a rundown city gymnasium with only 3,000 tickets available for fans. By contrast, Sunday's game was played at the state-of-the-art, 18,000-seat Mercedes Benz Arena with giant screens mounted over the courts, corporate hospitality booths and a halftime acrobatic show.

NBA Commissioner Adam Silver noted how important the Chinese market has become in recent years, saying there are now 300 million people playing basketball in the country_nearly the entire population of the United States.

"The growth of the NBA over the last decade has exceeded our expectations," he said. "It's been remarkable over the past 10 years how knowledgeable the Chinese fans have become about the NBA, and not just its superstars but every roster from player one to player 15."