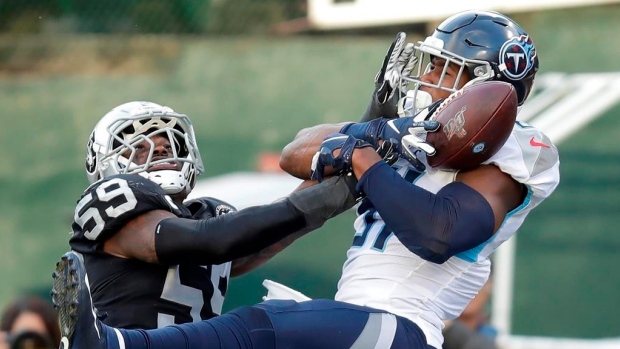 Titans streak their way into AFC South showdown with Houston , The Canadian Press

NASHVILLE — Coach Mike Vrabel told his Tennessee Titans what happens in the second half of an NFL season is what matters most.

Not only have the Titans salvaged a 2-4 start to put themselves into playoff contention, they have won four straight and six of seven to tie Houston atop the AFC South. The division rivals play twice in the final three games, starting Sunday when the Titans (8-5) host the Texans (8-5).

'"It's been good to be able to put ourselves in a position now to focus and concentrate on the Houston Texans," Vrabel said Monday.

The Titans had some help trimming the gap with Houston after the Texans lost 38-24 to Denver. Tennessee followed up by routing Oakland 42-21 on the road.

“Every game is big for us from here on out," quarterback Ryan Tannehill said. ``There is no looking ahead to anything. It's one game at a time and take advantage of the opportunity that's in front of us."

The offence keeps improving seemingly with each game. The Titans are averaging 31.4 points a game since Tannehill became the starter — second most in the NFL in that span. They also have 27 touchdowns over the last seven games, a big jump from the 11 scored through the first six games. It's why Tennessee now ranks 10th in the NFL in points scored per game.

Derrick Henry is second in the NFL in rushing, just 38 yards back of Cleveland's Nick Chubb, despite being cautious with a sore left hamstring. Henry is tied with Dalvin Cook of Minnesota with 13 TDs rushing.

Tannehill threw for a season-high 391 yards in Oakland, completing a pass to 10 receivers as Tennessee piled up a season-high 552 yards. He leads the NFL with a 118.5 passer rating

“My confidence only grows when I see them make those plays," Tannehill said.

The banged-up secondary. Starting cornerback Malcolm Butler is on injured reserve, and Adoree' Jackson missed the Raiders game with an injured foot. LeShaun Sims was out for a second straight week with an injured right ankle. Then starting safety Kenny Vaccaro suffered a concussion against Oakland.

The offensive line has struggled mightily this season with sacks and too many penalties. But the Titans did not allow a sack against the Raiders for only the second game this season. Left tackle Taylor Lewan, who publicly apologized after his own flag-filled game Nov. 10, has not been penalized in the three games since that post-game tirade at himself.

Kicker Ryan Succop. He clanked a 42-yard field goal off the left upright just before halftime. Succop now is 1 of 5 on field goals since being activated from injured reserve, and the Titans still rank last in the NFL, making 47.1 per cent of their field goals. The Titans signed Ryan Santoso on Nov. 27 to handle kickoffs and have some insurance, and Vrabel said they will keep working with Succop on his process and his accuracy.

“He just needs to put a good swing on it, trust that he's made a lot of kicks in this league and will continue to make kicks for us," Vrabel said.

Vrabel declined to give an update on his secondary, noting an injury report will be out Wednesday after practice. Vaccaro is in the concussion protocol. Henry kept his left hamstring warm during the Raiders' game with a pad wrapped around the back of his leg, the same hamstring that has had him on the injury report the past two weeks.

“There's no quit in me," Henry said. “My leg would have to be halfway off for me to stop.”

2007 — That's the last season the Titans swept the season series with the Texans.

Beat the Texans on Sunday to take the AFC South lead for themselves before hosting New Orleans with the regular-season finale looming Dec. 29 in Houston. A sweep of the Texans means Tennessee's first division title since 2008 and first playoff game at home since January 2009.