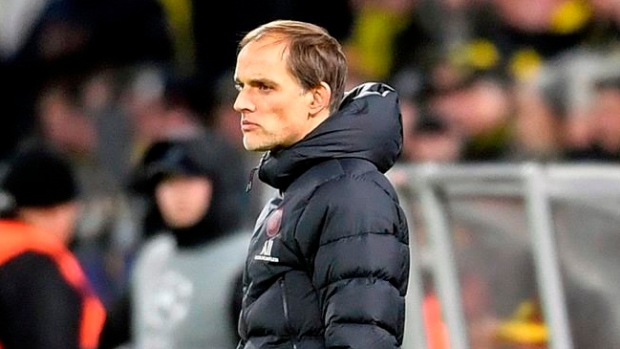 After PSG's 2-1 loss at Borussia Dortmund on Tuesday, star forward Neymar hit out at the club for holding him back from playing in three previous games. The Brazilian said he had sufficiently recovered from a rib injury to be able to play.

“I understand the fear, because I was injured in the last two years. I respect it but it can't be like that," said Neymar, who lacked sharpness inthe first leg of the last-16 game.

Although Neymar scored from Kylian Mbappé's pass, the goal stemmed from a defensive error. The Brazilian looked short of his best and PSG's vaunted strike partnership did not pose the anticipated threat.

“With Neymar lacking rhythm, we lose a bit of Mbappé's quality," PSG coach Thomas Tuchel lamented after the game.

Tuchel had spent considerable time leading up to the Dortmund game answering questions about whether Neymar would play in domestic matches against either Lyon, Dijon or Amiens.

But Tuchel's responses about Neymar's level of fitness were never clear.

“If I could decide alone, he would have played against Lyon," he said on one occasion, then adding: "It's not possible to risk the health of a player.”

He seemed to be indicating that the decision to rest Neymar had been taken out of his hands by the club's hierarchy. He intimated at it again when he said “it would have been better if he had played against Lyon, against Dijon (in the French Cup), that's obvious.”

Unrelated to the Neymar issue, Tuchel was insulted in a short but expletive-laced voice clip on Instagram by the brother of PSG defender Presnel Kimpembe, who played against Dortmund.

PSG's defensive frailties were on display again in Germany, just as they were in a 4-4 draw at struggling Amiens in the league last weekend. Tuchel said after that game he wasn't worried about the defensive lapses, but said after the Dortmund game that they may have been on his players' minds.

“We're lacking a bit of confidence. We needed to play with more freedom," Tuchel said. "We're too scared of making mistakes. But if you think about making them, they'll happen."

Aging central defender Thiago Silva couldn't cope with Dortmund's prolific 19-year-old striker Erling Haaland, having already struggled badly at Amiens. Kimpembe was out of sorts and Marquinhos — the club's best centre half — was deployed in midfield to shield the defence.

However, Tuchel's decision to line up in an unusual 3-4-3 formation exposed Silva. The 35-year-old Brazilian sat too deep to compensate for his fading pace, so as not to leave too much room behind him. That only served to give the rampaging Haaland even more room to run at him from deep.

The formation switch drew a parallel with 2016, when then-coach Laurent Blanc made a sudden change for the return leg away to Manchester City in the quarterfinals. PSG was the favourite — as it was on Tuesday against Dortmund — but went out after a poor performance.

PSG has not reached the quarterfinals since.

A ack of discipline, which has dogged PSG at times in big European matches, was also evident in Tuesday's patchy performance in Germany. Right back Thomas Meunier and key midfielder Marco Verratti picked up yellow cards, meaning both will miss the return leg on March 11.

Verratti, once again, was booked for a petulant reaction to the referee.

Blanc and his predecessor Carlo Ancelotti had both told the highly skilled — yet equally hot-headed — Italy international to cut that habit out of his game. So did Unai Emery, who was Blanc's successor.

But Verratti, sent off against Real Madrid two years ago, still has not done so.

Meunier, meanwhile, said he wasn't aware that his booking would lead to a suspension.

“That's annoying. If I had known, I wouldn't have made that foul,” the Belgian was quoted as saying.

There is much to sort out at PSG in the next three weeks, and the pressure is weighing strongly on Tuchel to make the right choices before he faces Dortmund again.

If he gets them wrong, and PSG again fails to reach the quarterfinals, it could spell the end of Tuchel's topsy-turvy tenure.