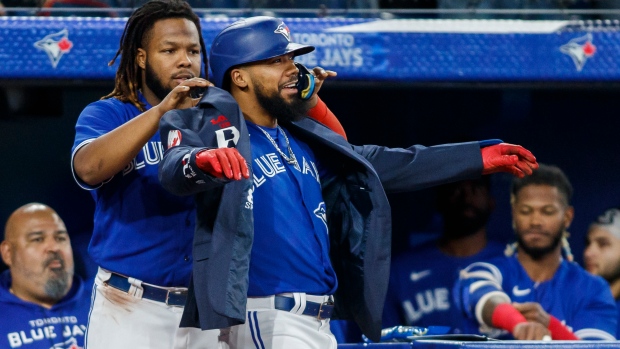 TORONTO — Whit Merrifield has never played in Major League Baseball's post-season but as the playoffs approach for the Toronto Blue Jays he knows one thing: his team is eager to get started.

Teoscar Hernandez had two home runs, one a solo shot and the other a two-run blast, to help Toronto down the Boston Red Sox 6-3 on Sunday. Merrifield also had a solo home run and added an RBI single as the Blue Jays closed in on home-field advantage in the first round of the American League's post-season having clinched a berth on Thursday.

"Guys are hungry not just to get to the playoffs but to make a run. We have the guys to do it. We have the talent to do it," said Merrifield, who has a .382 batting average in his past 10 games. "Just a matter of getting hot at the right time and put things together and being sound in all facets of the game when Friday comes."

Toronto swept the three-game series with Boston to wrap its final homestand of the regular season. The win helped the Blue Jays tighten their grasp on home-field advantage in the first round of the American League playoffs.

The Blue Jays kick off a three-game series in Baltimore on Monday to finish off the regular season.

If Toronto can stay ahead of the Seattle Mariners in the wild-card standings it will host all three games of its AL wild card series starting Friday. If the Mariners catch them, the Blue Jays would be on the road.

"You've got to have like seven suitcases packed," joked Toronto interim manager John Schneider. "But we're ready to deal with it however it shakes out. I'm just excited that we're in this position."

George Springer drove in a run with a fielder's choice in the seventh inning to back a lengthy day for the Toronto (90-69) bullpen after starting pitcher Kevin Gausman left the game with a cut on the middle finger of his throwing hand. He allowed two runs on four hits, striking out four, over three innings before giving way to Zach Pop (4-0) of Brampton, Ont.

"I just think that with the post-season coming up, I didn't want it to get any worse and possibly it not get any better for that start," said Gausman who, along with Alek Manoah, will likely start in next weekend's playoff series. "Unfortunate, obviously, I would have loved to stay out there. (...) but I thought it was the smart move."

After Pop's two innings Adam Cimber, Anthony Bass, Yimi Garcia and closer Jordan Romano of Markham, Ont., each pitched an inning. It was the first time in franchise history that the win and the save in a game were earned by Canadians on home soil.

Bobby Dalbec supplied all of the offence for the Red Sox (75-84) with a solo home run and an RBI single that drove in two runs.

Dalbec got the Red Sox on the board in the second inning, hitting a single to score J.D. Martinez and Abraham Almonte. Those were the first runs Boston had scored in the series after losing to the Blue Jays 9-0 and 10-0 on Friday and Saturday, respectively.

Hernandez replied for Toronto in the bottom of the second, smashing the first pitch he saw from Wacha 430 feet into the second deck at Rogers Centre.

Merrifield tied it up in the next inning with his solo shot. Like Hernandez's first home run, his bomb went into the second deck, flying 404 feet into the stands above the Blue Jays' bullpen to the delight of the 43,877 in attendance.

Hernandez handed Toronto its first lead of the game in the fourth, putting an 84.2 m.p.h. change-up from Wacha into the foul netting in left field for his 25th home run of the season. That brought home Vladimir Guerrero Jr., for a 4-2 lead.

Dalbec scored the final Red Sox run of the game when he launched a no-doubter off Bass to cut Toronto's lead to 5-3 in the seventh inning.

ON DECK — José Berríos (11-7) will take the mound as the Blue Jays travel to Baltimore. Dean Kremer (8-6) is scheduled to pitch in the opener of the three-game series.

This report by The Canadian Press was first published Oct. 2, 2022.