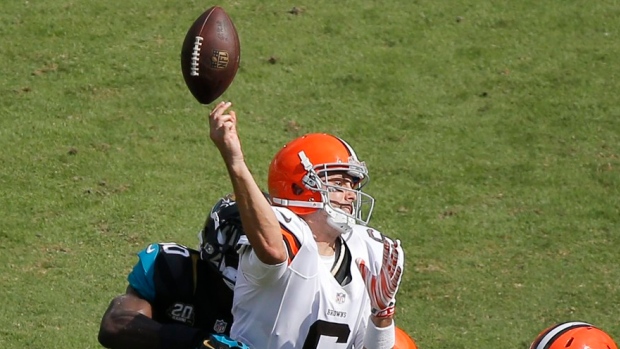 HOUSTON - Quarterback Brian Hoyer joined the Houston Texans on Wednesday to compete with Ryan Mallett for the starting job.

The move reunites him with coach Bill O'Brien, who was an assistant with the Patriots for Hoyer's three seasons there.

"To get back with a guy who I really trust, I think that was a big part of the decision process," Hoyer said. "I'm excited to get back and get to work with him."

Hoyer said O'Brien has meant a lot to his career.

"I don't think I would be where I am today without my time with him in New England," he said. "He's a fiery guy. He expects a lot out of you. He doesn't sugarcoat anything and that's kind of how you want it in this business."

"I've dealt with a lot of competition throughout my entire career, so it's not something that I shy away from," Hoyer said.

"Obviously, I chose to come here knowing that Ryan is here. It will make both of us better. We have a good relationship so it will be good for the entire team to see two guys like us go out there and work hard and do whatever we can to help this team win."

Hoyer received well wishes from Brady on Wednesday, before the New England quarterback got competitive about his team facing Houston this season.

"He's obviously really excited for me and he was quick to let me know that we play them here this year," Hoyer said. "That's just typical Tom. He probably has the entire schedule memorized. He was excited for me. He was such a big mentor and friend throughout my entire career really, even after I left New England."

Hoyer appeared in 14 games for Cleveland last season with 13 starts before he was benched in favour of Johnny Manziel. He threw for 3,326 yards with 12 touchdowns and 13 interceptions.

The 29-year-old Hoyer was signed by the Patriots as an undrafted free agent in 2009 and has appeared in 32 games with 17 starts in his career and has thrown for 4,557 yards with 19 touchdowns and 19 interceptions.

The move comes on the same day Houston traded Ryan Fitzpatrick to the Jets for a conditional late-round draft pick. Fitzpatrick started 12 games last season in his only season with the Texans.