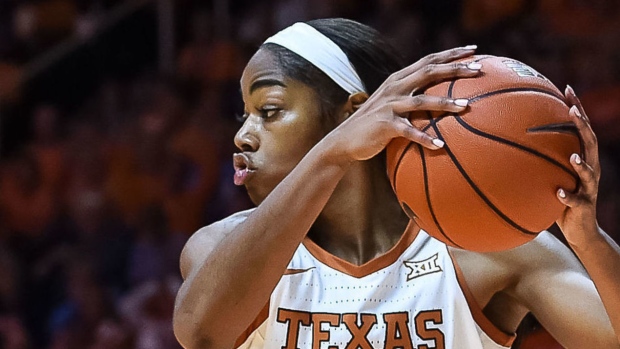 It’s also not a draft with a hyped, slam dunk superstar at the top like a Breanna Stewart or an A’ja Wilson.

“[But] of course there’s really good players in this draft. And of course teams are going to be able to find players who can fit a need for them. “

One of those players is projected No. 1 pick Charli Collier of the Texas Longhorns.

A 6-foot-5 centre who was a First-Team All-Big 12 Conference selection in 2019-20, Collier has stood out in this year’s class with her size and strength.

As a junior this past season at Texas, she averaged 19.0 points and 11.3 rebounds per game while shooting 51.1 per cent from the field.

“When you look at Charli, she looks like a WNBA player,” said Lobo. “You know, she’s big and strong. Has a great frame. Plays really hard. She added the three-point shot, which a stretch four needs to have now in the WNBA. She’s got a good looking stroke, she’s got decent hands.”

ESPN’s latest mock draft has the Mont Belvieu, Texas native in the No. 1 spot.

However, questions about Collier’s game emerged after subpar performances in the Big 12 championship semifinals and in the NCAA tournament, specifically against Baylor.

In three games against Baylor this past season, Collier averaged just 5.7 points and 5.0 rebounds shooting 35.7 per cent.

“I think when you see her performance against some teams in particular, Baylor, it makes you take pause a little bit but I think you also understand the system she was playing in, a dribble drive offence, what she was surrounded by,” said Lobo. “A big is in heaven when they are surrounded by shooters because it gives them space to be able to operate.”

While she performed much better in No. 6 Texas’ Sweet 16 upset of No. 2 seed Maryland with 16 points and 11 rebounds, Collier struggled again in the Elite Eight against South Carolina with just 4.0 points and 4.0 rebounds and going 2-of-10 from the field.

The Dallas Wings have the No. 1 and 2 picks in the upcoming WNBA draft as well as the fifth and seventh picks. Despite Collier’s struggles, team president and CEO Greg Bibb considers her to be in the top group of players in the draft.

“I don’t put a lot of value on specific slotting of players,” said Wings president and CEO Greg Bibb in a media conference call.

Collier has the potential to be just the second Big 12 player taken first overall since the Phoenix Mercury took Brittney Griner in 2013 and the first from Texas.