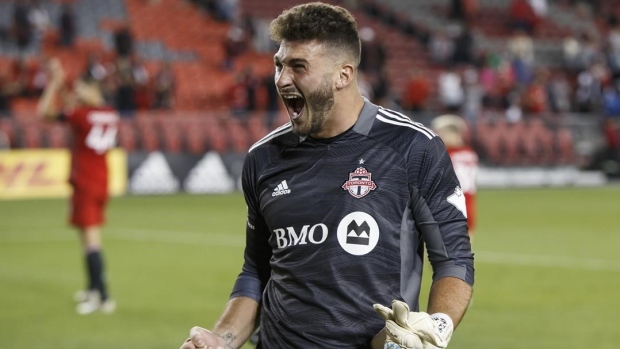 Toronto FC flew out of Vancouver the same night it lost the Canadian Championship final to the Whitecaps this week.

"No. It was a long way," he said. "It was weird. You're kind of up in the clouds and at a certain point you see the horizon. And the sun starts to come up. And you're like … 'It's morning.'"

Proof positive that the sun does rise — even after a painful 5-3 penalty shootout defeat.

In his eighth season with TFC, the 28-year-old Bono has grown up in Toronto colours. On Saturday, barring unforeseen circumstances, he will celebrate his 150th appearance in all competitions with the MLS club when Toronto (6-12-4) visits the New England Revolution (6-7-8).

Along the way, he has outlasted goalkeepers Joe Bendik, Chris Konopka and Clint Irwin. Bono and Quentin Westberg have essentially shared the No. 1 duties for the last four seasons, with Bono holding down the starting job most of this year.

Over the last four seasons, the 36-year-old Westberg has started 69 regular-season and playoff games compared to 54 for Bono.

"Joe was the guy when I first got here," said Bono, Toronto's sixth overall pick in the 2015 MLS SuperDraft. "So I've seen it all play out. I've been here through all of it.

"I've been around long enough to know how the game is played and the trials and tribulations of the position, and different coaches and their philosophies on goalkeeping and the way they decide who's better for the team … I understand the nature of the business. There has been a lot of fluctuation in the position.

"But I do take some solace that there's been one constant for a long time. Whether that's been on the field, in a supporting role, coming in and doing my job every day … And I do appreciate that I've been here a long time and I've been able to fight for my position."

A superior shot-stopper who has become one of TFC's most articulate voices, Bono says the competition aspect of his job "gets you up in the morning."

As for his future with the club, given his contract situation, Bono says he tries to look for the silver lining.

"It doesn't come to an end now or during the season or while there's still games left. It comes to an end when the games are done. And I've always said the important thing for me is to focus on each game, each day in training and make sure that I'm not doing myself a disservice. That when it does end I don't look back and say 'Man, I wish I would have given it more. I wish I would have focused more.'"

Such focus comes with a cost. Bono recalls waking up recently and suddenly realizing his brother's birthday was three days away.

"Because I've really been focusing on waking up and living the day. Living the training session. Not taking the next one for granted. Not dwelling on the previous ones. And just living for the next day. For me, I found that in terms of outside pressures and stresses, you don't have as many, I'm not at all concerned at what will happen at the end of the year. Whether I'm able to stay here and continue, which I obviously would love. Or whether I have to pursue another venture, another setup.

"No one can tell what the future holds with that. I certainly can't. My agent can't. So from that perspective it is a bit of a waiting game. But for me, it's totally clear in my head that whatever happens will happen and I'm at peace with figuring out what happens at the end of the season when all's said and done."

Words to live by.

It has been a week of high and lows for TFC, which thumped visiting Charlotte FC 4-0 last Saturday with Italian newcomers Lorenzo Insigne and Federico Bernardeschi putting on a show in their MLS debut. The victory snapped a five-game winless streak (0-4-1).

But the storyline turned sour Tuesday in Vancouver.

Going into weekend play, 13th-place Toronto is three places and four points below New England in the Eastern Conference. It stands six points out of a playoff position with 12 games remaining.

The Revs, coming off a scoreless draw at Columbus, are winless in five (0-2-3). Four of those five games were away, including losses to Philadelphia and New York City FC who stand 1-2 in the East.

New England hasn't had a longer run without a win under coach Bruce Arena. It last went six or more consecutive games without a victory from July to September 2018 (0-6-3) under former coach Brad Friedel.

New designated player Giacomo Vrioni made his debut off the bench in the draw with Columbus. The 23-year-old forward tied for the scoring lead with 19 goals in the Austrian Bundesliga, while on loan with WSG Tirol from Italy's Juventus.

Saturday will not serve as a reunion with former Toronto striker Jozy Altidore, who signed with New England after his contract was bought out by TFC in February. Altidore, who has one goal in 17 appearances (four starts) this season for the Revs, has joined Mexico's Puebla on loan until January.

The Revs have listed star striker Gustavo Bou as questionable with a leg injury. The Argentine designated player leads the team with seven goals.

"He'll be ready to play next week," said Arena

Toronto got one monkey off its back against Charlotte by posting its first clean sheet since Sept. 25, 2021, in a 0-0 draw at Colorado. Now the team is looking for its first league road win of the season (0-7-3).

TFC has won its last two visits to Foxborough. But its overall record on the artificial turf at Gillette Stadium is 4-10-5.

This report by The Canadian Press was first published July 29, 2022.