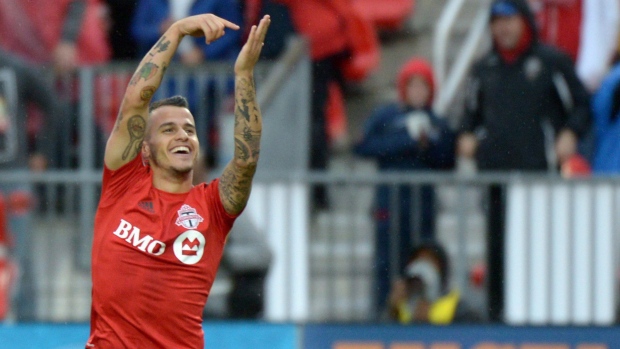 Just hours after playing a Euro 2016 qualifier for Italy, the star striker flew back to Canada to help Toronto FC clinch their first-ever playoff berth.

Giovinco came into Wednesday night's game against the New York Red Bulls in the 71st minute and didn't disappoint — scoring a highlight-reel goal to lead TFC into the post-season with a 2-1 victory at BMO Field.

"He texted immediately after the game last night, he texted before he got on the plane, he texted before he landed, he hit me up as soon as he got here and he said he was going to play," Toronto coach Greg Vanney said. "He was ready to play and so when I think a player like that knows himself well enough then I wanted him to touch the field."

It was the fourth-straight win for Toronto (15-13-4), which will be heading to the post-season for the first time after joining MLS in 2006.

Giovinco brought the crowd of 18,143 on its feet in the 79th minute after deking out a slew of Red Bulls defenders before firing a shot into the right-hand side of the net. He celebrated the goal by using the Toronto Blue Jays stirring the pot symbol.

"It was a very nice goal, you can choose which one was the best one, but it was a real nice goal and hopefully he is going to score more like that," Giovinco said through a translator.

It was the 22nd goal of the season for Giovinco, who has been having an MVP-calibre campaign.

Herculez Gomez took Giovinco's place in the starting lineup and was a presence through the game.

Gomez gave Toronto a 1-0 lead in the 51st minute after picking up a through ball from Jackson that deflected off a New York defender and beat outstretched Red Bulls goalkeeper Luis Robles.

But it was Giovinco's dedication to Toronto's cause that delighted Vanney after the game.

"He cares. He cares about this team, he cares about the project that is getting us into the playoffs, quite frankly, he wants to win the scoring title and we all want him to win it," Vanney said.

"He knows that we are fighting for the city and for the fans that haven't quite seen the playoffs just yet so he wants to be a part of that, it's his ambition."

Giovinco created another opportunity in the 85th minute when he used his speed to bolt down the right-hand side of the pitch and send in across, but Robles made a big save to keep the game at 2-0.

The victory jumps Toronto into sole possession of second place in the Eastern Conference standings with 49 points, one point ahead of D.C. United.

The focus for Toronto now shifts to having a bye for the first round of the MLS Cup playoffs. The top six teams in each conference make the post-season with the top two teams on each side getting a first-round bye. The third and fourth-ranked clubs open at home.

Shaun Wright-Phillips scored the lone goal for New York (16-10-6) in the 86th minute. The Red Bulls are five points ahead of TFC for first place in the East with two games remaining on their schedule.

The Reds wrap up their regular season with a home match against the Columbus Crew on Saturday before facing the Montreal Impact at Saputo Stadium on Oct. 25.

"We're really proud to pull three points to move up to second place, because that’s one of our goals is to keep pushing forward and get as high as we can," Vanney said. "If we can squeeze that first bye and play at home we’d guarantee ourselves a home game, we’d be very happy with that."

Notes: Toronto captain Michael Bradley was inactive due to a mild groin injury. ... TFC improved to 11-4-1 at BMO Field this season. ... Toronto's Jozy Altidore, sitting on the bench, was given a red card for a foul and abusive language in the 34th minute.

Note to readers: This is a corrected version of an earlier story. D.C. United did not host the Vancouver Whitecaps on Wednesday as previously stated. Vancouver played FC Dallas and it did not effect Toronto FC's place in the Eastern Conference standings.