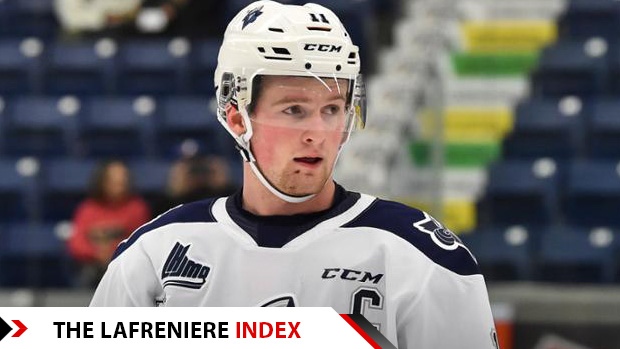 If there wasn’t enough heart-stopping hockey drama over the past nine days, Monday night will also be chock full of it, with the fortunes of eight franchises floating in tiny ping-pong balls.

NHL commissioner Gary Bettman is expected to pluck one of eight balls – each emblazoned with the logo of one of the eight teams that lost in the qualifying round – live at 6 p.m. ET on the air in the NHL Network’s New Jersey studio to determine the winner of the Alexis Lafreniere Lottery.

The consensus No. 1 pick for the NHL’s first-ever draft in October has been patiently awaiting his presumptive new home since the first run at the Draft Lottery on June 26 left him in limbo.

Unlike the typical Draft Lottery, where the draw is conducted prior to the show using four numbered balls and 1,000 different weighted combinations, all eight teams whose playoff bubble burst in the play-in round will have an equal 12.5 per cent shot.

That simplicity, plus the ability to dispel any conspiracy theory given the high-profile franchises involved, will result in the live draw for all to see.

Without question, Lafreniere is a fit for all 31 NHL teams, described as a lower-case franchise-changing left winger. He isn’t in the same generational category as Connor McDavid or Sidney Crosby, but Lafreniere is expected to make an immediate impact in the NHL.

The questions are: Which team benefits the most and where can Lafreniere enjoy the most success?

Working alongside TSN Director of Scouting Craig Button, we’ve come up with the Lafreniere Index, which seeks to blend both of those directives:

Button’s Barometer: Dear Alexis, which player would you rather call your centre: Hart Trophy winner Connor McDavid or (likely) Hart Trophy winner Leon Draisaitl? There is no wrong answer. For the Oilers, Lafreniere would fill an enormous hole on the left side - one that was glaring in this qualifier series against Chicago, with Ryan Nugent-Hopkins starting alongside McDavid and finishing alongside Draisaitl. Edmonton has reinforcements on the way on the blueline with Philip Broberg and Evan Bouchard, but no forward close to Lafreniere’s calibre in their arsenal. He would be the Oilers’ fourth No. 1 pick in the last 11 drafts. But imagine the venom Lafreniere would add to hockey’s already most lethal power-play unit.

Button’s Barometer: The pipeline of No. 1 picks from La Belle Province’s QMJHL to Pittsburgh – from Le Magnifique to Marc-Andre Fleury, Sid the Kid to Lafreniere – would make for four incredibly capable hands to pass the Penguins’ franchise torch. Crosby and Lafreniere are the only two-time CHL Players of the Year ever. It’s a story that Disney wouldn’t dare to write, especially in a year where the Penguins finished seventh in the regular season standings. But for Lafreniere to chase a Stanley Cup alongside his boyhood idol, whom he met for the first time last September when Crosby’s No. 87 was retired in Rimouski? Special. So would the opportunity be to toggle between Crosby and Evgeni Malkin down the middle. The only thing that separates the Penguins and Oilers’ fit is that Lafreniere would have a longer runway to play with McDavid and Draisaitl in Edmonton because of their ages.

Button’s Barometer: Luck? The Jets didn’t have much of it this season – from Dustin Byfuglien quitting on the eve of training camp to Mark Scheifele and Patrik Laine going down with injury in Game 1 of the qualifying round. Winnipeg needs a player to get them over the hump. Their hole is clearly down the middle. They’ve already got Kyle Connor on the left side. But Nikolaj Ehlers’ ability to play the right side could free the Jets to slide Blake Wheeler to the middle, freeing up resources that would’ve needed to be spent on a second-line centre to now be reallocated to the blueline. It makes sense: The Jets would have been the placeholder ‘Team E’ that won the June 26 lottery based on the regular-season standings. Plus, winning the No. 1 pick would provide some much-needed positive vibes nearly 40 years after the Jets 1.0 drafted Hawerchuk, as he is in the fight of his life right now, battling cancer. #HawerchukStrong

Button’s Barometer: It’s difficult to envision a world where Lafreniere would be penciled into David Quinn’s depth chart above Hart Trophy finalist Artemi Panarin. But there is no question Lafreniere perfectly fits the Rangers’ rebuild plans, as laid out in a letter by GM Jeff Gorton less than three years ago. He would give New York its best pair of wingers since Vic Hadfield and Rod Gilbert formed the GAG Line with Jean Ratelle some five decades ago. Lafreniere is an immediate offensive upgrade on Chris Kreider – capable of scoring 60 points at a minimum next season. Add Lafreniere to the list with still-developing Kaapo Kakko and Vitali Kravtsov and the future is bright on Broadway.

Button’s Barometer: The list of things David Poile hasn’t done in the NHL over 38 consecutive years as GM is not long, but it includes winning the Stanley Cup and picking first overall. Would crossing off the latter help him accomplish the former? It wouldn’t hurt, that’s for sure. Lafreniere would become Nashville’s top left winger in short order. There are numerous contract landmines standing in the Preds’ way for contender status, including Kyle Turris, Ryan Johansen and Matt Duchene, none of whom have done enough. There have been some poor trades (Seth Jones and Kevin Fiala, for starters). But the truth is Nashville has been so competitive going for that elusive Cup that their first pick over the past five drafts averages out to 47th overall. Lafreniere would provide a serious shot in the arm.

Button’s Barometer: Speaking of a shot in the arm, how about an injection of high-level skill in the State of Hockey? With Kirill Kaprizov incoming, the Wild would have two prime candidates for the Calder Trophy next season. Both Kaprizov and Lafreniere are ready and physically mature enough to make immediate impacts. Minnesota’s defence is dependable with Jared Spurgeon, Matt Dumba and Jonas Brodin. Now, with Kevin Fiala, Kaprizov and Lafreniere up front, they will be ready to take another step forward in the Western Conference. The last true star Minnesota drafted was Marian Gaborik at No. 3 overall in 2000. Lafreniere can shoot the same kind of star power into their lineup.

Button’s Barometer: There is no one who could argue that the Maple Leafs truly need Lafreniere. They already have arguably the best forward corps in the NHL – this would be another case of the rich getting richer. Winning the No. 1 pick might be both a blessing and a curse. On the one hand, Lafreniere would be the No. 1 left winger the Leafs haven’t had. But the cap-strapped Leafs would suddenly need to account for another $4 million-plus forward at a time when entry-level compensation rises for the first time in the salary cap era with a new CBA. Adding another expensive forward, regardless of his production, would limit their ability to address their biggest problem, which resides on the blueline. It’s a problem every GM in the NHL would love to have, one that might force the Leafs to explore trading some of their other forwards for that help. At the very least, it’s a reminder of why all first-round draft picks traded should be lottery protected. The Leafs traded this pick to Carolina last year to move on from Patrick Marleau and expected to be a Cup contender. You just never know.

Button’s Barometer: A new regime is incoming, but a team of zero accomplishment with no shortage of top-flight picks over the past two decades does not earn the trust that Lafreniere would be well positioned for success in South Florida. The Panthers drafted Aaron Ekblad (2014), Aleksander Barkov (2013) and Jonathan Huberdeau (2011) at No. 1, 2, 3 in a four-year span and have exactly zero playoff wins to show for it. Add in the fact that Lafreniere might be a clone of Huberdeau as a high-impact left winger and it’s even less of a fit. Lafreniere might provide a brief bump in ticket sales with all of the French-Canadian snowbirds in sunny Florida, but until there is a clear new path forward with the Panthers’ new management, there is little evidence to suggest any other meaningful and lasting bump on the ice.