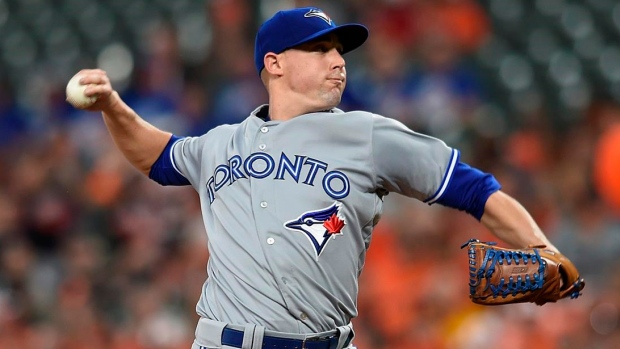 When I was a young baseball player, arm maintenance was just starting to become a thing.

I remember doing circuits of weighted arm raises after Little League games, using soup cans for weights. I graduated to tiny dumbbells in middle school. By my freshman year I was gifted with surgical tubing to use as a “resistance band.” By my junior year I had industriously put a hole in a baseball and threaded my surgical tubing through it to create the most life-like resistance tool of my time.

Fast forward nine years into my professional career and my arm maintenance routine included balancing in a pushup position, flat like a plank with my palms on a curved board. As I balanced on small, round ball, a trainer would push me in random directions to force my shoulders to quickly stabilize, lest I slip off the board and break my jaw.

It sounds pretty cool until you realize that, only a few years later, Marcus Stroman was wearing a suit full of gyroscopes and accelerometers.

By the time I retired, I felt I knew everything there was to know about my throwing arm. Yet, in all that time ­– four years of high school, four years of college and 10 years of professional ball – I never found a way to stop my fingernail from splitting or keep myself from suffering through the pain and frustration of a massive blood blister at least once a season.

When I had these problems, I’d start a game, get about 50 pitches in, then notice that the middle fingernail on my right hand was beginning to crease – creating a dull, white streak about an eighth of an inch down the side of my nail.

That white mark forms from the pressure created as the ball rolls off the side of that long middle digit. In other words: from pitching.

My natural pitching action caused my nail to bend, again and again, like one might wiggle a wire back and forth until it finally snaps. And that’s what always happened to me.

First, the white crease would appear. Then the nail would snap at the edge, parallel to my cuticle, and tear, slowly, with each additional pitch, into the centre of the nail. It would bleed steadily, additional spurts coming via the pressure of the ball, rolling down the finger to the nail tip.

As the inning would progress, blood would get on everything. White jerseys became stained with red and orange streaks of blood and rosin. Not quite like Trevor Bauer’s finger after his drone accident last season, but bad enough.

I’d do my best to pitch through it, but it was painful. When it wasn’t painful, it was simply numb and bloody. Neither is helpful when success in your chosen craft is dictated by dexterity, sensitivity and pinpoint control.

After the nail broke there was nothing much I could do besides make futile attempts to patch it up as I waited for it to grow out. I tried every patching compound there was: Super Glue, fake nails applied at nail salons, tapes, two-part epoxy. I even tried industrial adhesives that burned my skin.

Yes, you can trim a nail. That was the first thing everyone told me to do. “Don’t let them get so long and you wouldn’t have to worry about broken nails,” was a common refrain. But length was not the issue. My nails were industry standard. In fact, I kept them at a precise length because cutting them too short resulted in a blister more painful than the nail tear!

Throwing was the issue. Humidity and nail care played a part, but it was really just throwing and the way my body was made. Specifically, the way my fingernails were made. Hell, I even tried a steady diet of prenatal vitamins for precisely this reason.

No one has any sympathy for an injury like this. Not fans, not teammates, not commentators. Boo hoo, you broke a nail. It’s the most ridiculous, pathetic injury a pitcher can get. In fact, there were times I wished I had something more serious just so I could stop getting mocked for having bad nails.

The same cannot be said for your arm. It’s been proven that elbow and shoulder injuries from throwing can happen anytime during the process, regardless of whether you’re a starter or a reliever. They can happen on the first pitch of a start or the 130th in a complete-game bid. The nail, however, gives you warning signs, as do impending blisters. The fact I would throw only one to three innings in an outing made this less of a factor.

The second thing I did was place flesh-coloured mesh tape on my nail and glue it into place. I did this for my entire professional career and no one ever noticed.

The mesh tape soaked up the glue, which helped the tape bond to my nail. Together it formed a flexible patch that would hold for about three innings, maximum. I precut small, moon-shaped tape patches and placed them on a wax sheet in my locker. I always kept Super Glue on hand, ­sometimes in my back pocket, while pitching. I changed the patches out every time I pitched more than three innings and before the start of every game.

As I review Sanchez’s finger issues, I can’t help but think that moving him to the bullpen, at least until he finds a system that works for managing his finger (try the tape and glue, Aaron!), makes sense for both parties.

Joe Biagini has proven himself a capable and reliable starter, and, at the very least, worthy of continuing in the role. Sanchez, meanwhile, has already excelled as a reliever.

But more to the point, the Jays could use a solid reliever right now more than another starter. Jason Grilli is a mess. He’s given up nine homers in 17 innings. As a high-leverage reliever, that’s horrifying. Clearly the Jays need to address Grilli’s lack of production, even if they don’t supplant him with Sanchez.

However, if they do choose to place Sanchez in the pen, it could be the best possible use of him on a team full of consistent starters. Not only does a Sanchez-in-the-bullpen scenario allow the Jays the ability to manage finger care, it also makes one of the American League’s premier power arms available for almost every game.

Moving Sanchez to the bullpen gives the Jays an option similar to the Cleveland Indians’ ability to bring Andrew Miller in at will. Sure, the Jays will lose the chance to talk about Sanchez as a potential CY Young candidate starter, but that’s only out the window for this year. You might as well have the next-best thing: a mid-innings terminator who stops rallies before they start.

I'm sure Sanchez wouldn’t be pleased about the change – no starter is ­– but now is not the time to worry about roles or reputations. Now is the time to maximize resources. With the Jays back to full health and the rotation stabilized, the bullpen becomes the focus once again.

If the Jays do want to claw their way back into contention in such a strong division, they’ll need to hold every lead they have. That’s something Sanchez can help do – and stay healthy while doing it.