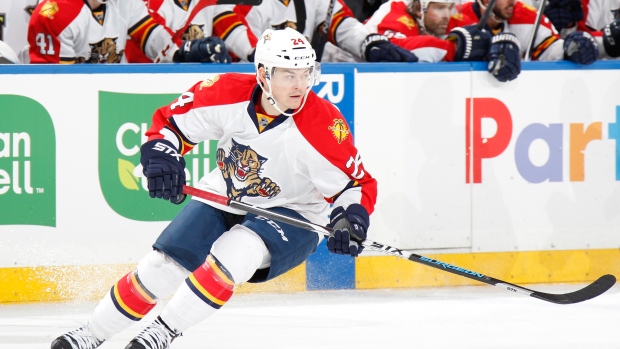 If I told you one of the league’s better 5-on-5 scorers was still available in unrestricted free agency, would you believe me?

Such is life right now for veteran winger Jiri Hudler, who seems to be feeling a bit of the salary cap squeeze as he pursues his next contract.

Hudler, now 32 years old, has undoubtedly seen his best hockey years come and go. But he is still a player who has produced at tremendous rates over the last few seasons. At even strength, we are talking about a guy who has sat top-20 league wide, sandwiched between the likes of Joe Thornton, Rick Nash, Mike Hoffman and Mark Stone. That’s pretty great company, and for the record, pretty well-paid company.

Hudler is one of those players who fly under the radar as an offensive threat. He doesn’t have a booming shot or the sleekest brand of skating, and he isn’t the type to stickhandle his way out of a phone booth. I can understand why management groups might undervalue or underestimate what he can do for a team.

But this is precisely where looking at the numbers is helpful. The even-strength scoring rates are what they are – Hudler is, for all intents and purposes, a first-line scorer. So the next question is: How does he do it?

The answer is something I find rather interesting. Hudler, for many seasons now, has driven some of the biggest shooting percentage spikes across the league. We can go all the way back to 2010 and observe this trend. 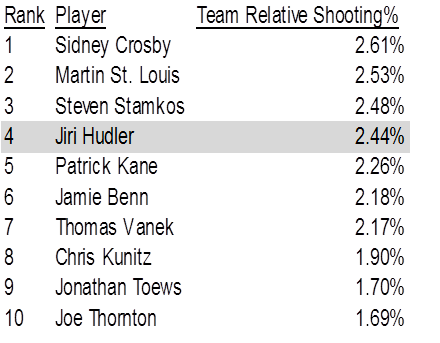 The list is generally comprised of three types of players: elite shooters (Stamkos), elite playmakers (Thornton), and a combination of both (Crosby). By and large, the overarching point here is that getting into this echelon of shooting percentage impact isn’t fluky – it’s skill. And this has been tested at the position level.

Back to Hudler. I think just about everyone would bin him in that elite shooters group. And again, maybe that’s not something a group of hockey analysts would have ever concluded without looking at the data, but it is reality. Over that same six-year stretch, Hudler has individually shot 10.3 per cent at 5-on-5. That’s third-best in the league, only trumped by the likes of St. Louis and Stamkos. The fact that he’s been such a lethal shooter means the likelihood of his individual shooting talent driving his team’s on-ice shooting percentage is quite high.

But, I do think that glosses over the type of impact Hudler’s had on his teammates. They, too, become better shooters when playing with Hudler. Is it possible that we don’t give him enough credit for being a sharp playmaker? The shooting percentage splits over our same interval seem to suggest it as a possibility. 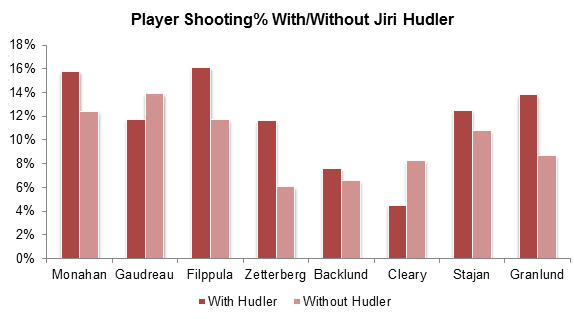 I don’t think this is the smoking gun of playmaking excellence that you see with a Thornton-type talent, but that’s an awful lot of guys who seem to convert on a higher percentage of chances when playing with Hudler versus the alternatives. I think it’s an emphatic argument when you consider the first five – the players who have predominantly played with him over the years – see dramatic upswings in conversion rates, with only Johnny Gaudreau taking a bit of a step back.

So, to recap: we know Hudler is still a very good 5-on-5 scorer. We know he’s still a very good individual shooter. And we can reasonably conclude that he’s a player that has a positive impact in the offensive zone for his teammates, who also become better shooters when working with him.

Is that enough to offset some of the lingering concerns around his game, be it mileage or defensive zone prowess? I think so. We are well beyond the point of silly season for free agent contracts, and it seems to me that he’s going to eventually sign to a low-term, low-financial risk contract with a team.

If I was that team, I wouldn’t wait much longer. I still think he has some hockey left in the tank, and there’s always room for another scorer in the National Hockey League.