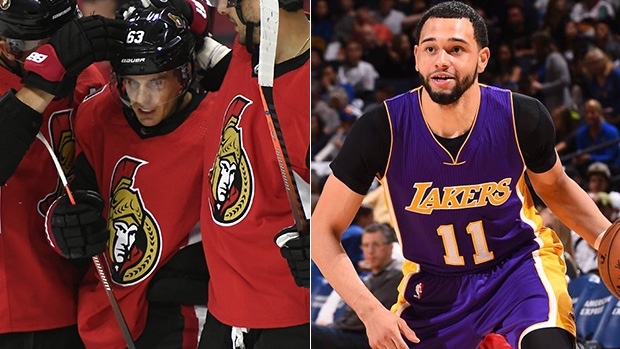 Tyler Ennis was not expecting a grim diagnosis from the doctor.

The then-Maple Leafs forward took a puck off the inside of his right ankle from a Morgan Rielly wrist shot on Dec. 22, 2018. The forward knew he suffered a broken bone in his ankle, but he could not believe the injury was as catastrophic as the doctors were suddenly indicating.

“They pulled up my X-ray. And they’re like ‘Woah – you’ve got a really bad displaced break here,’” Ennis said.

Ennis was confused by the severity of the situation, with the doctor making it seem as though he might have suffered a season-ending injury.

“I said to them right away, ‘But you said this wasn’t displaced,’” Ennis remembers saying at the time.

Confused, the medical staff went back and re-examined the image. It turns out they did have the X-ray image of a badly displaced ankle bone from Tyler Ennis.

It just wasn’t the right athlete.

“They double-checked and they actually had the image from the other Tyler Ennis, who broke his leg playing basketball overseas. His break was a lot worse than mine,” explained Ennis. “When they confused our X-rays, I was a little nervous. I thought my recovery was going to take a lot longer.”

Ennis ended up being sidelined for less than two months with his ankle injury – returning to game action a lot faster than his basketball-playing namesake. Tyler Ennis the basketball player missed more than a full calendar year of action after suffering a career-threatening leg injury while playing for Fenerbahce in Turkey last fall.

When told the story of how his X-ray image caused a moment of panic for Tyler Ennis the hockey player, the basketball-playing Ennis felt a combination of humour and sympathy.

“Wow. Just wow,” laughed Ennis, who is now back on the court with the Raptors 905 team. “The timing of that is just mind-blowing. I can only imagine what he was thinking.”

After suffering the gruesome injury on the basketball court on Oct. 21, 2018, Ennis underwent surgery in Turkey – before returning home to Toronto to start a rigorous rehabilitation program. As part of the process, he was getting regular checkups at a hospital in Toronto at the same time as the hockey-playing Ennis suffered his ankle injury with the Leafs. So he completely understands how the mix up probably occurred.

“I was going for X-rays every couple of weeks in Toronto, so it makes perfect sense,” the basketball-playing Ennis said.

The two players are used to frequent cases of mistaken identity – albeit in less serious situations.

“It happens all the time,” said the basketball-playing Ennis. “If I’m out the waitress will look at the bill if I’ve paid with my credit card and say, ‘Are you the hockey player?’ I always find it funny when someone says, ‘Didn’t you used to play hockey?’”

The basketball-playing Ennis says he also keeps regular tabs on how the hockey version of Tyler Ennis is doing, because his Twitter mentions are constantly flooded with hockey commentary.

“I basically get updates on him every game. People message me on Twitter and social media thinking it’s him,” he explained.

The hockey-playing Ennis – in his first season with the Ottawa Senators – doesn’t have any social media accounts, but he keeps close tabs on how the basketball player with the same name is doing.

“We’ve just been kind of weirdly connected over the years. I’ve always followed him and cheered for him,” said the hockey-playing Ennis. “He’s a Canadian kid like me. I think we both got waived or bought out around the same day one time.”

Sure enough, both were released by their respective teams within a 48-hour window in the summer of 2018. On June 28, one Tyler Ennis was waived by the Los Angeles Lakers and then on June 30, the Minnesota Wild bought out the final year of the other Tyler Ennis’ contract.

Oddly enough, the two athletes who share a name and many common experiences have never actually met in person. The two were a stone’s throw from each other in upstate New York when one Ennis was a regular with the Buffalo Sabres and the other was a standout NCAA player with Syracuse.

“He was a superstar in Syracuse. I always wanted to trade jerseys with him, but it went against the NCAA rules at the time,” the hockey-playing Ennis said.

In 2014, Syracuse played a March Madness regional game at the First Niagara Center in Buffalo – home of the Sabres. The two didn’t cross paths at that point because the Sabres were on the road, but the basketball-playing Ennis made sure he found Ennis’ stall inside the Sabres dressing room and took a picture sitting inside of it.

“One day maybe we’ll finally meet each other,” says the hockey-playing Ennis.

If the stars align, the two could finally meet each other later this season. The Senators pay a visit to the Maple Leafs on Saturday, Feb. 1. That same afternoon, the Raptors 905 squad plays an afternoon home game in Mississauga, Ont. – leaving plenty of time for the basketball-playing Ennis to make it downtown to watch the Senators.

“I would love to do a jersey swap now. That would be really cool,” the basketball-playing Ennis said. “And if he scores, hearing my name announced inside a hockey arena would be pretty cool.”

When they do meet, the two will probably share a few laughs over the uniqueness of their situation.

“It’s a cool coincidence to have a hockey Tyler Ennis and a basketball Tyler Ennis,” said the hockey player.

“When my parents first heard about there being another Tyler Ennis, they couldn’t believe it,” the basketball player said with a laugh. “Ennis isn’t exactly a common name. If your name was Joe Smith, it would probably happen all the time.”