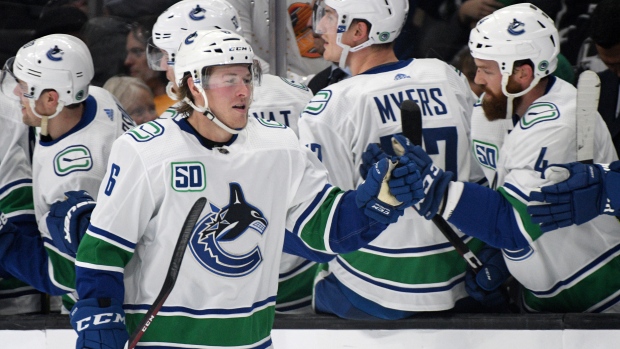 If you’re a fan of a Western Conference Canadian club, it probably wouldn’t take many guesses to nail the Core 4 for your squad. The slotting of the players might vary, but the core would be the same.

But you might want to know: Who is next? Which players have a chance to crack the 2020 version of the Core 4?

With the help of TSN Director of Scouting Craig Button, let’s take a deeper dive into the Canadian cores:

Methodology: We went through every organization, from top to bottom, isolating the top players 23-and-under who are now Core 4 players or are authentic candidates to become Core 4 players. We then graded each eligible player, which came with a corresponding point value that aided in team rankings. In the case of closely graded teams, the edge was given to teams with a stronger total core. With closely graded players, those currently in the NHL earned the edge over prospects in the minors or junior. To be eligible, a player must be 23 or under on Oct. 1, 2019.

Team moved up from 2018 Ranking

Team moved down from 2018 Ranking

Cream of the Crop

One big question: Is Raphael Lavoie the winger the Oilers have been craving?

It’s certainly shaping up that way. Behind Cole Caufield, Lavoie and Los Angeles’ Arthur Kaliyev were the two best pure goal scorers in the 2019 draft. Lavoie has done nothing to dispel that notion with his incredible start to this season in Halifax. He’s got the big body frame and touch to be a potential impact forward. Even though it was just Ken Holland’s first draft in Oil Country, hitting on a player like Lavoie would be a boon for an organization that hasn’t produced many NHL players outside of the first round in recent years.

One big question: Is Thatcher Demko the Canucks’ goalie of the future?

Vancouver is the only Canadian club with two goaltenders inside their Core 4 plus Four. Demko is certainly in the driver’s seat at the moment, scratching and clawing with Jacob Markstrom for more action. He’s got the pedigree as a second-round pick and has the numbers in the AHL to back it up. But Michael DiPietro, who got a taste of the Vancouver market at last year’s World Junior Championship, has impressed in Utica to begin his professional career. That’s one battle worth watching moving forward.

One Big Question: Who is ‘Emilio?’

That’s the coolest thing about Mathias Emilio Pettersen’s story: Born in Norway, the Flames’ sixth-round (No. 167 overall) pick from 2018 grew up wearing just his middle name on his sweater. One name only. Emilio was like the Norwegian Pelé. More importantly, Emilio is playing like a late-round find who can make a dent on the Flames someday. Calgary has a representative in attendance at almost every University of Denver game, with Emilio a candidate to turn pro after this sophomore season.

One big question: What happened to the Jets’ core depth?

Well, there’s no question that the Jets have graduated some top-flight talent to the NHL in recent years with Mark Scheifele, Jacob Trouba and Josh Morrissey all aging out. But it seems some of their recent draft picks with high hopes, such as Jack Roslovic, Kristian Vesalainen, Mason Appleton, Logan Stanley and Sami Niku, may not pan out as significant contributors at the next level. They may ultimately be full-time NHL players, but not at the level once thought, indicating that there might not be much help on the way.