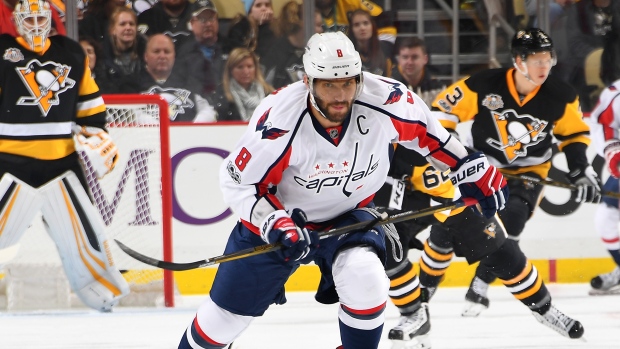 One of the reasons the National Hockey League playoffs are so endearing to both hardcore and casual fans is the relatively high degree of unpredictability compared to other major sports leagues, especially in the earlier rounds.

Top-tier teams know they still have the best shot to win it all, but mid-tier teams know that they’re just a break or two away from going on a postseason run of their own. What you have is chaos that gives any one of 10 or so teams a chance of making a run into May.

The late, great Tore Purdy back in 2011 noted that the NHL’s best regular-season team has a great chance to win the Stanley Cup – so long as you perceive a great chance to be about 22 per cent versus the field. It’s been about six years since that post and I’m not sure much has changed.

Since that time (and excluding the lockout) we saw the 2013-14 Boston Bruins (+84 in goals), the 2014-15 New York Rangers (+60 in goals), and the 2015-16 Washington Capitals (+59 in goals) all fall short of winning the title. The 2012-13 Chicago Blackhawks (+53 in goals) did win the title in the lockout-shortened season. The bottom line is that it’s very, very hard to win a Stanley Cup. A team needs not only to play exceptional hockey, it also needs some luck – it has to get most of the bounces, avoid debilitating injuries, and so on.

Still, it’s not as if bad teams win the Stanley Cup. What we have seen, particularly in the modern era of hockey, is that a top-tier team is a pretty big favourite to be the last one standing. Now maybe that’s the best team, or the second-best team, or the third-best team, but it’s a team with a considerable degree of talent.

So, what does make up a Stanley Cup winner? Since we have nine of them now in the “modern era” of NHL hockey, we have some pretty compelling data on the qualities of a championship candidate. And the data are fascinating.

There are two prevailing theories about a championship team. The first is that goaltending is a must. The second is that defence wins championships. The data suggests the first seems absolutely true – all teams (save one) ranked in the top-half by save percentage during their respective regular season. The second strikes me as a bit of a misnomer. 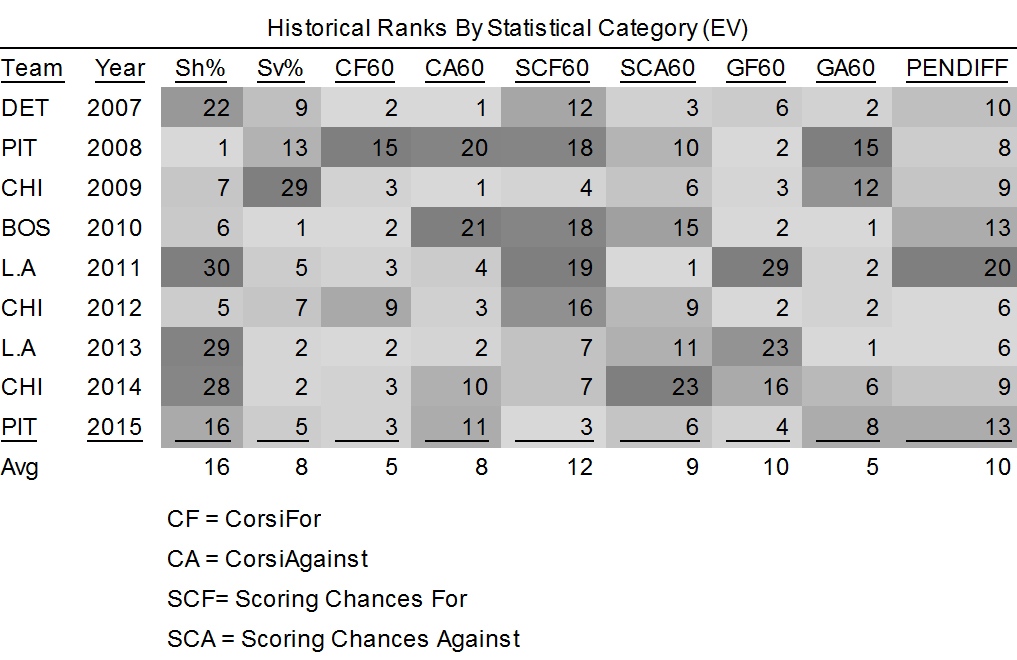 The divide between a team’s shooting talent and save percentage talent isn’t surprising at all. We know teams have a lot more control over their save percentage because it’s driven by one player (their goaltender), so talent there is much more repeatable. It’s actually kind of interesting how so many Stanley Cup winning teams had poor shooting percentage through the regular season. The same is not true for save percentage, though Chicago is a notable exception.

The interesting part to me comes in column five (CF60) and column six (CA60). It would certainly seem to me that offence – not defence – drives teams to championships. All nine Cup winning teams have ranked in the top-half of shot generation. Take away Pittsburgh for a moment, and the average rank of those eight teams is third.

I think you can then make an argument – at least at a rudimentary level – that the teams most likely to win a Stanley Cup have extremely strong shot-generation rates and extremely strong goaltending, both of which drive favourable goal differentials.

What does that look like for the 2016-17 season? I’ve paired the data down to those two sets for all 30 teams.

There are at least four teams that jump out here in a big way, three of which (Pittsburgh, San Jose, and Washington) I think most people would expect. The one that really interests me is Montreal. Carey Price is the obvious point here, but Montreal is actually a very strong team at generating shots. If you’re asking why that hasn’t manifested in a ton of goals for them yet, look no further than that pesky shooting percentage, which is middle-of-the-road.

The other side of the coin is much more interesting. Can you put much faith in Minnesota with poor shot generation numbers, or New York (who have always struggled here, but are now also going through a troubling Henrik Lundqvist season too), or Anaheim? The data isn’t encouraging.

If you’re looking for a sleeper, the Boston Bruins might be a strong bet. Tuukka Rask and company have been excellent for a decade, save this year. If their goaltending regresses favourably in time, well, watch out. They already live in the offensive zone at 5-on-5. That combination could sneak up on a team in a hurry.